PIC: Second-hand clothes are sold at Gisozi Market, one of the few markets left with such clothes in the Rwandan capital Kigali. (AFP)

Across Rwanda, markets selling piles of cast-off clothes once worn by Americans have become the unlikely centre of a trade war that vendors say is ruining their livelihoods.

Kigali, determined to boost its domestic textiles industry, in 2016 raised tariffs on the importation of secondhand clothes, disrupting a multi-million dollar industry and setting it on a collision course with the United States.

It was a good business which expanded quickly, allowing them to buy homes and get married.

"The decision took everyone by surprise, at first we relied on the stocked clothes but after a few months reality kicked in, and things went from bad to worse," said Twagirayezu.

"I am soon throwing in the towel".

East Africa imports around an eighth of the world's used clothing into an industry that employs some 355,000 people who earn $230 million a year, according to a study by the American development agency, USAID.

The large majority of these clothes come from the US and regional leaders, including Rwanda's Paul Kagame, blame the cast-offs for stymieing development of their own clothing industries.

While Twagirayezu has watched his business wither, Dusabe switched to selling Chinese imports, but is not faring much better.

"You can't imagine how many customers I have lost by switching to selling Chinese clothes! Many people still come asking for second-hand clothes, when they don't find them they don't come back," he said. 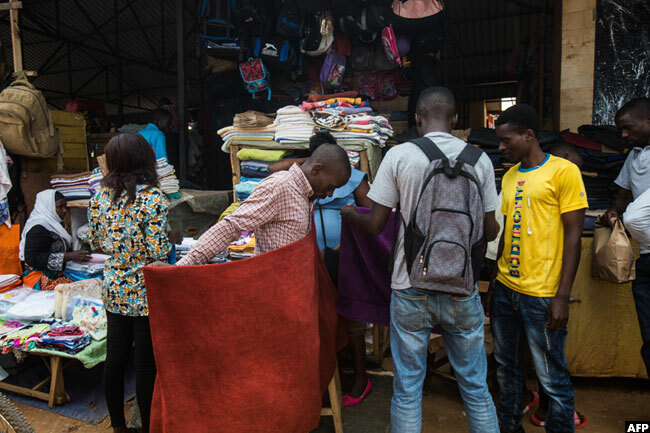 But the alliance cracked as Kenya, Tanzania and Uganda balked at the prospect of retaliatory loss of access to US markets via the African Growth and Opportunity Act (AGOA) whereby some countries can export some products to the US duty free.

Rwanda, alone, did not capitulate and in 2016 its imports of used clothing dropped by a third.

In late March this year the US told Rwanda it would lose some of its AGOA benefits within 60 days as a result. The deadline since passed and no action was announced, but with President Donald Trump on the warpath over trade Rwanda is unlikely to be forgotten.

Rwanda's clothing industry is nascent, with only a couple of players, which means there are some surprising victims of the trade spat.

One of those losing out is Chinese garment maker C&H which set up in Kigali's special economic zone in order to enjoy AGOA benefits.

Many of its US clients have put orders on hold until the AGOA issue is resolved. "We have lost market in the US because of the AGOA situation," said manager Emmy Iraguha.

C&H has an annual turnover of $154 million and has been producing exclusively for export. It has not yet bowed to Rwandan government pressure to produce clothes for the local market to fill the gap left by the dearth of second-hand clothes.

Rwanda's other clothes producer is Uterxwa, which specialises in industrial clothing and uniforms, has welcomed the "positive move" to ban second-hand clothes. 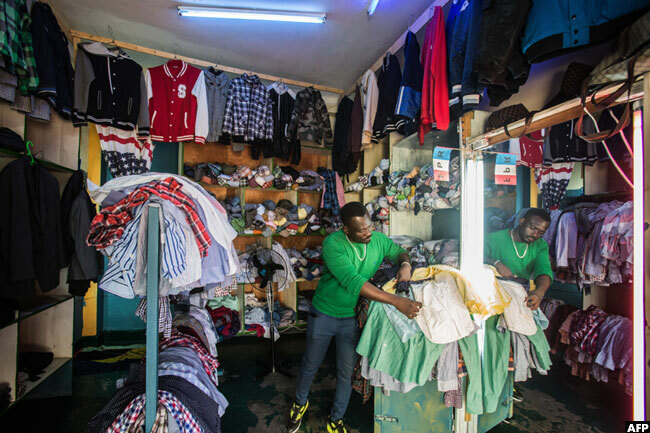 Thierry Ngendahimana, who started a second-hand clothes business three years ago, arranges stock at his shop in Kigali

"Once the companies making clothes locally are many the products will be competitive, not only in Rwanda but even in the neighbouring countries," said managing director Ritesh Patel, alluding to the difficulty of producing clothes cheaply enough for the domestic market.

"The alternatives to secondhand clothes are very expensive," said Kevin Uwamahoro, a motorcycle taxi driver who crosses into Uganda to go clothes shopping at its still-thriving second-hand markets.

The big winner in this David and Goliath trade war might well be Chinese companies whose flood of cheap garments are set to replace used clothing while continuing to stifle local industrialisation.

"Considerable imports of Chinese clothing, both legitimate and undeclared, constitute the real threat to the East African textile industry," said the USAID study.

However, Andrew Mold of the UN's Economic Commission for Africa, said high import tariffs on clothes from China and India mean there is a "margin for regional firms to compete".

In the meantime, however, it is ordinary Rwandans -- buyers and sellers of second-hand clothes -- who continue to suffer.