Home
NEWS
MEDIA
Supplements
Tenders
Notices
The meeting will be only the third of its kind, following summits in Pyongyang in 2000 and 2007

The meeting will be only the third of its kind, following summits in Pyongyang in 2000 and 2007

PIC: On Friday Kim will become the first North Korean leader to set foot in the South since the Korean War ended 65 years ago. (Credit: AFP)

SOUTH KOREA - North Korea's leader Kim Jong Un and the South's president Moon Jae-in will meet at the Military Demarcation Line that divides the peninsula for their summit Friday, Seoul said, in an occasion laden with symbolism.

Moon will greet his visitor at the concrete blocks that mark the border between the two Koreas in the Demilitarized Zone, the chief of the South's presidential secretariat Im Jong-seok said.

When Kim steps over the line he will become the first North Korean leader to set foot in the South since the Korean War ended 65 years ago.

The meeting will be only the third of its kind, following summits in Pyongyang in 2000 and 2007, and the high point so far of a rapid diplomatic rapprochement on the tension-wracked peninsula, ahead of a much-anticipated meeting between Kim and US President Donald Trump.

The North's nuclear arsenal will be high on the agenda. Pyongyang has made rapid progress in its weapons technology under Kim, who inherited power from his father in 2011.

Last year it carried out its sixth nuclear blast, by far its most powerful to date, and launched missiles capable of reaching the US mainland, sending tensions soaring as Kim and Trump traded personal insults and threats of war.

Moon seized on the South's Winter Olympics as an opportunity to try to broker dialogue between them. 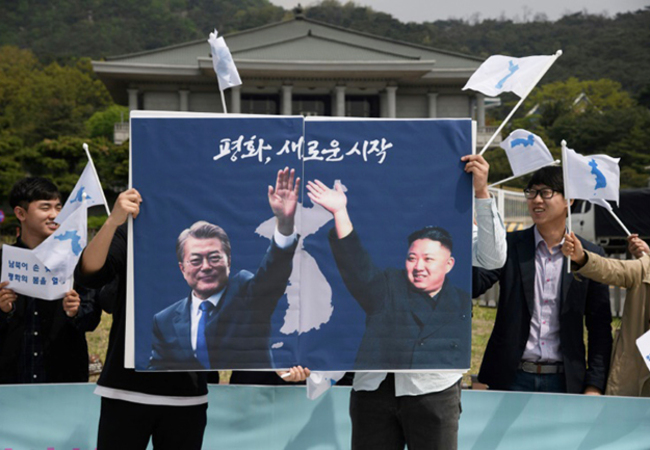 But Im warned: "Reaching a deal on denuclearisation at a time when North Korea's nuclear and ICBM programmes have advanced greatly will be fundamentally different in nature from denuclearisation agreements reached in the 1990s and early 2000s.

"That's what makes this summit all the more difficult," he added.

"The difficult part is at what level the two leaders will be able to reach an agreement regarding (the North's) willingness to denuclearise," he said, "and how it will be expressed in text".

In the past, North Korean support for the "denuclearisation of the Korean peninsula" have been code for the removal of US troops from the South and the end of its nuclear umbrella over its security ally - prospects unthinkable in Washington.

In recent days Seoul has promoted the idea of a path towards a peace treaty to formally end the 1950-53 Korean War, which stopped with a ceasefire, but Im did not mention the issue.

Reunions of families left divided by the conflict could also be discussed, and Moon has told Japanese Prime Minister Shinzo Abe that he would raise the emotive subject of Japanese citizens kidnapped by the North's agents.

Kim will be given a military honour guard and the two leaders will walk to the Peace House, a glass and concrete building on the southern side of the truce village of Panmunjom where the summit will be held.

Kim will sign the guest book before the morning session starts, Im said, describing the occasion as a "summit for peace and prosperity on the Korean peninsula".

The delegations will have separate lunches, Im told a briefing, with the North's group crossing back to their side of the border to eat.

Moon and Kim will together plant "a pine tree, which stands for peace and prosperity, on the MDL, which has symbolised confrontation and division over the past 65 years", Im said.

The soil will come from Mount Paektu, on the North's border with China, and Mount Halla, on the South's southern island of Jeju.

After they sign an agreement a joint statement will be issued.

"We are thinking it could be called the 'Panmunjom Declaration'," Im said.

A banquet and farewell ceremony will follow in the evening before Kim returns to the North.

Pyongyang's delegation will include Kim's sister Kim Yo Jong, one of his closest advisers, who attended the Winter Olympics in the South in February as his envoy, Im said.

The North's ceremonial head of state Kim Yong Nam, who accompanied Yo Jong to the Games, will also be part of the group, as will its foreign and defence ministers.

"Unlike in the past, the delegation includes top military official and diplomats," Im said.

"We did not expect this. We believe it signals that North Korea views the summit not just as a North-South summit but is also considering the US-North Korea summit."