KABALE - The Government Chief Whip, Ruth Nankabirwa, has described President Yoweri Museveni as a strong man who cannot be challenged by the Opposition in the country.

She said that Museveni has a potential that cannot be shaken by the various moves set by the Opposition.

"I would like to assure you that Museveni is here to stay. He has the power, the money and other resources that are necessary to push this country to greatness," Nankabirwa said.

She made the remarks while presiding over the belated Women's Day celebrations for Kabale district at St. Barnabas Secondary School playgrounds in Karujanga, Katuna Town-council on Friday.

Nankabirwa hailed the National Resistance Movement (NRM) legislators who supported the amendment of the Presidential age-limit, saying what they did has given them the best position in the country.

"Those who opposed the move to amend the presidential age limit are now living cowardly. They feel ashamed of the fact that their efforts proved them wrong at the end of the day. For us in NRM we proudly say that our stand was the best for Uganda," she said.

"A good leader represents all people without discrimination. I, therefore, ask you to keep visiting your people and support them in whatever they are doing," she said.

At the same function, the State Minister of Finance for Planning, David Bahati, who is also the Ndorwa West MP donated 1,000 mama kits to women who find it hard to access them during maternity.

Bahati said it is a good cause to support pregnant women in Kabale and to encourage them to deliver from health centres to improve maternal health.

"We still have a lot of maternal challenges, but a collective effort towards our mothers will see this problem being solved," said Bahati.

He said the Government continues to support women development in various capacities for the development of communities.

Bahati also pledged sh15m towards the construction of a girls' hostel at St. Barnabas Secondary School, Karujanga. The school, which currently has 1,300 students, according to Bahati, lacks enough accommodation for boarding students, especially girls. 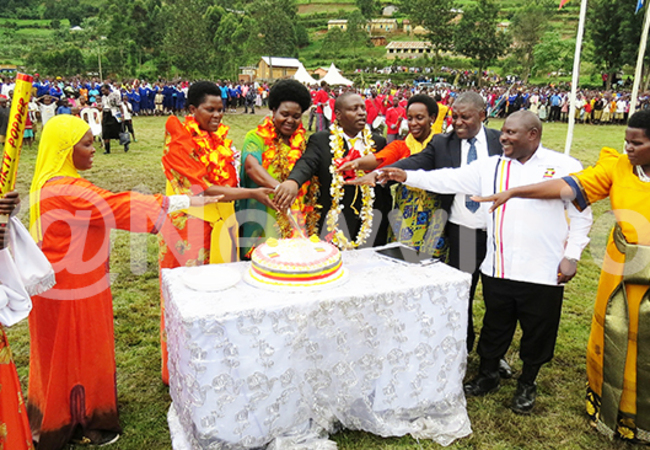 Nankabirwa and Kabale district leaders cutting a cake during celebrations

"I would like to warn defilers that we shall not allow this in Kabale and if one is reported to have done it, the strong arm of the law will deal with him," he said.

Nandinda blasted the former Gender Minister, Miria Matembe for her proposal to have all defilers castrated, saying that it was a barbaric proposal from a lady of her calibre.

"The NRM government cannot reason like Matembe who thought that castrating men who defile is the best way to deal with this problem. The law can deal with criminals of that nature efficiently,"  Nandinda said.

"We shall strongly deal with men who sell family land or property without the consent of their wives. Women are entitled to all fair treatment in decision making at family level," said Keihwa.