Teenage pregnancies have intensified Uganda’s fertility rate, which is 5.4 children per woman

PIC: Rabiya Nakaziba says she chose implants because she wanted to give herself enough time to develop skills and secure her future. (Credit: Lillian N. Magezi)

At 20 years, Rabiya Nakaziba, a resident of Busowobi Parish in Iganga has chosen to have implants. This is a method of family planning made up of two small rods like matchsticks that are put under the skin of an arm. They keep on releasing hormones, which prevent pregnancy and they work for up to five years.

Nakaziba says she has chosen a long-term method to prevent pregnancy because she wants to first secure her future. She is already a mother of one, having given birth at the age of 19 during her senior four vacation. She says her pregnancy was unplanned, adding that the only means of contraception she knew about was condoms, but that her boyfriend refused to use them. Nakaziba had heard about condoms from her friends who were using them.

Nakaziba is still living with her parents and has no source of income. Therefore, she wants to have time to acquire a skill that will enable her to earn money to look after herself and the child.

Nakaziba says she heard about the free family planning services at Busowobi Health Centre III through a peer educator from Reproductive Health Uganda who approached her at her home.

She says when she sought out the services, a midwife sensitised her about the different options and she settled for implants. Nakaziba says she chose implants because she wanted to give herself enough time to develop skills and secure her future.

Nakaziba is just one of the many youth who have contributed to Uganda's high prevalence of teenage pregnancies. According to the Uganda Demographic Health Survey (UDHS) 2016, the youth are highly sexually active and average age at which they start having sex is between 15 and 16.

Subsequently, on average, 25% (or one in every four) of the girls in Uganda have a baby before the age of 19. In rural areas, the prevalence is higher at 27%, while in some areas like Teso region, the number is as high as 31%.

In addition, 61% of girls who have had their first child also have their second child by the age of 19. This has resulted in a large dependency burden as children with no source of income give birth to more children.

According to health state minister in charge of general duties, Sarah Opendi, teenage pregnancies have intensified Uganda's fertility rate, which is 5.4 children per woman.

Opendi made the remarks recently during the launch of the Silence is Deadly campaign, which aims at sensitising youth about sexual and reproductive health issues. This is because when girls start having children early in life, they end up having more children than those who start late because they will have more reproductive years.

Opendi also decried the fact that teenage pregnancies are a big driver of the high maternal mortality rates in the country which stands at 368 deaths per 100,000 live births.

"It is unfortunate that teenage pregnancies contribute 20% of cases of maternal mortality in the country. Therefore, prevention of teenage pregnancies by sensitising the youth about sexual and reproductive health issues will go a long way in reducing cases of maternal mortality and reducing the dependence burden on the population. This helps Uganda to harness the demographic dividend, which refers to economic benefits that countries get when their population structure is made up of more adults who are productive than children who are dependants," Opendi explained.

Teenage pregnancies, many of which are unwanted, have contributed to the high prevalence of illegal abortions in the country most of which are dangerously done and cause deaths. According to reports from the Ministry of Health, 8% of maternal deaths are due to unsafe abortions. Teenage pregnancies have also led to the high rate of school drop outs in the country, which stands at 32%.

Speaking at the Silence is Deadly campaign, Pamela Onyango, the Africa regional director for Planned Parenthood Global, said such poor indicators will make it difficult for Uganda to achieve sustainable development goals 3, 4 and 5. These require countries to ensure healthy lives and promote the well-being for all at all ages. It is also meant to ensure inclusive and equitable quality education and promote lifelong learning opportunities for all, in addition to achieving gender equality and empower all women and girls.

The major reason given for the poor sexual and reproductive health indicators among the youth is lack of youth-friendly health services. The youth note that they are put off from seeking health services by the poor attitude of the health workers who insult them, telling them that they should be focusing on their studies and not having sex. Youth also feel uncomfortable seeking services from the same facilities as adults.

Other reasons include lack of knowledge about the availability of the services and inadequate access to age-appropriate information, which is brought about by the fact that in many societies in Uganda, people do not freely discuss issues related to sex.

In addition, as Dominique Mulesa, a project officer with RHU and peer educator, noted, there are many taboos, stigma, myths and misconceptions surrounding issues to do with sexuality, especially in regards to the youth. For example, parents fear that using contraception will make their children barren or get cancer in future. Therefore, there is need for continuous health education for both the youth and adults in the communities. 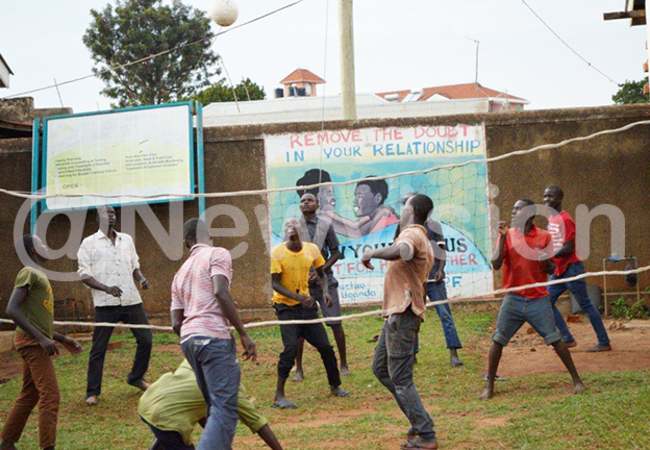 During a recent visit to Uganda, Dr Alvaro Bermejo, the director general of the International Planned Parenthood Federation, an organisation that deals in sexual and reproductive health services, urged the Government to invest in providing and promoting access to sexual and reproductive health services for the youth. One way this could be achieved is by providing youth-friendly services.

This could be a model similar to one promoted by Reproductive Health Uganda, an affiliate of International Planned Parenthood Federation.

The Reproductive Health Uganda (RHU) Clinic in Iganga district and Busowobi Health Centre III are some of the facilities that provide youth-friendly services. As one approaches the RHU Clinic, one sees several groups of youth, both boys and girls, engaged in different activities. These include games, both indoors and outdoors such as volley ball, pool and several forms of board games. In one corner is a group that is engaged in a health education session about condoms, STIs and HIV/AIDS. In addition, there are rooms where youth go for counselling, testing for HIV and other STIs in addition to accessing family planning services, including condoms.

Although the facility provides services to the general population throughout the day, the time between 5:00pm to 6:00pm every day, apart from Sunday, is specifically dedicated to serving the youth (between 10 and 24 years).

Annet Kyarimpa, the technical co-ordinator for safe motherhood at the RHU head office, says once in three months, the clinic  holds what is referred to as youth open days. These are five days set aside for serving youth both in and out of school. The youth are sensitised about sexual and reproductive health in addition to guiding them on the acquisition of life skills such as computer training, baking and hairdressing.

She says setting time aside for the youth has encouraged them to seek services because they get to freely interact with the health workers in privacy without fearing which adults might see them.

Kyarimpa also explains that providing the youth with life skills such as computer classes, baking and hairdressing, especially those who are out of school, helps them become financially independent, thus making them less vulnerable to being lured into activities that might compromise their health, especially the girls.

According to Fauza Bikufa, a service provider with RHU and acting in-charge for Busoga region, since youth have shown that they prefer to talk to people who are closer to their age about sexual and reproductive health issues, RHU recruits and trains peer educators from the communities. These are the people who conduct the health education sessions. In recruiting, peer educators, Bikufa says they contact the youth councillors and local leaders for recommendations.

In addition, Dominique Mulesa, a project officer with RHU and peer educator, notes that during the health education sessions, participants are divided into three groups; those between 10 and 15 years; 15 and 24, and another group of those that already have children.

This helps them to give each group age-appropriate information to help empower them accordingly. Towards the end of the sessions, the youth are urged to ask the peer educator any questions that they have so as clarification is given.

Bikufa said with a model like this, it has been easy for them to sensitise the youth on health issues, which has made them more open and encouraged them to take up services in a freer manner. As a result, their uptake of contraception has increased.

Although a model like the one RHU uses has several advantages, Bikufa notes that one major challenge they face is that youth keep on moving away from their communities, for example in search for jobs, to go for further studies or get married. This means they keep on losing peer educators. Therefore, they have to be continuously recruiting and training peer educators.