Moves by Qatar to pay back the recruitment fees for 30,000 migrant workers building its World Cup stadiums have been welcomed by the International Trade Union Confederation (ITUC).

By the end of March more than 5500 people from across South Asia, a third of the workforce, will be reimbursed money they paid to middlemen who hired them to work in the tiny Gulf state.

The Doha government is negotiating with its contractors in the hope that the rest of the construction workers, expected to reach 30,000 by 2019, can have their fees paid as well as part of a total £3.6million payout.

The ITUC described the move as ‘a positive step' towards getting rid of a hated system which forces many vulnerable workers into debt bondage.

Recruitment fees have become a thorny issue for Qatar and dealing with it is part of the Supreme Committee's drive to improve the tiny Gulf state's record on human rights.

The money is paid by the workers in their home countries to contractors who recruit them to work abroad.

Up until now, the payments are only reimbursed if the worker can produce receipts, which only happens on a handful of occasions.

Under the reforms, the burden of proof will instead shift onto contractors who will have to pay back workers their recruitment fees unless they can prove they made the payment. 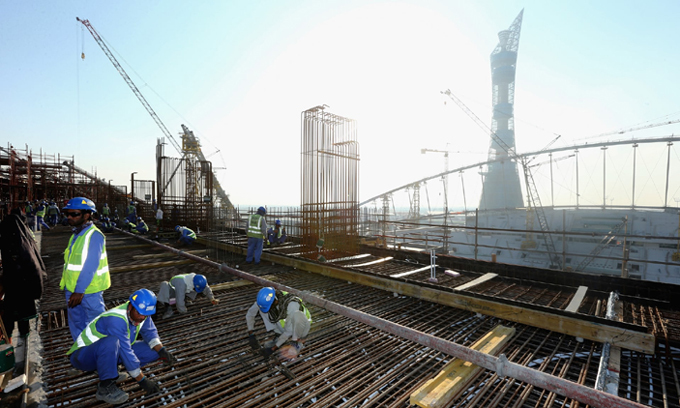 Workers at building one of the stadiums that will host the World Cup. PHOTO: AFP

Every year millions of workers are approached across South Asia by a range of recruiters, agents or brokers moving labour around the world to satisfy global demand.

But many who set off in the hope of earning their fortune end up in debt bondage because the fees are so huge they have to forfeit their salaries when they start work just to pay them off.

Now, as part of plans by Qatar to end the abuse, contractors will pay workers back the money over the period of their employment.

The amount they get will depend on their country of origin as figures can vary.

Amnesty International investigators discovered some workers in Nepal were paying £1020 ($1420) for work in the Gulf region.

Rosey Hurst, Head of Impactt, an ethical trade consultancy which has just completed a 56-page report on worker welfare in Qatar, said: ‘In the source countries there is still this strong narrative that the streets are paved with gold in other countries. People feel that but it often costs much more to get there than they think.

‘The recruitment fee is like a levy according to nationalities. You might have a principal recruiter in Dhaka, Bangladesh, who will have stringers going back into villages and communities. Workers have to pay everyone as they go along and there are other expenses as a result of things like medical checks.'

Ms Hurst said changes were being rolled out by Qatar's Supreme Committee, which is charged with delivering the World Cup, including things like the number of hours worked and the introduction of a minimum wage. 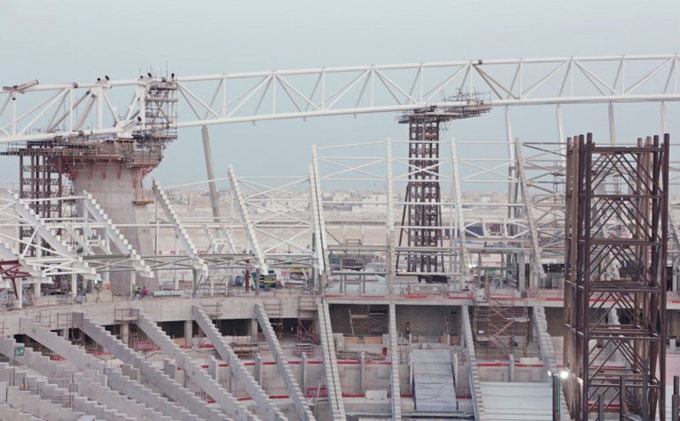 One of the stadiums under construction

She added: ‘We need to get a flow of money to start going back to these people. All workers care about is: Am I getting enough money? Am I getting respected at home and here? Is this job providing me with a leg-up for my family?'

She said Qatar had chosen the route of transparency over its handling of migrant workers because ‘the eyes of the world are upon it' and it wanted to compete globally in human rights issues.

Sharan Burrow, General Secretary of the International Trade Union Confederation, said: ‘Recruitment fees are a major problem for migrant workers in many countries, including Qatar.

‘All countries of origin must also ban recruitment fees and rigoriuysly enforce the ban.

‘This is a positive step, which should be rapidly extended to all workers as part of the ongoing labour reforms in Qatar.'

In January Mrs Burrow praised Qatar for agreeing to end the notorious ‘kafala' system of sponsored labour which in its worst cases amounts to slavery.

Amnesty International has spent many years documenting how migrant workers are routinely required to pay high fees to secure work in the Gulf.

"The high-interest loans workers take out to meet the costs of their migration often leaves them with crushing debt which significantly increases the risk of forced labour and other severe labour abuses.

"All contractors have a responsibility to respect human rights. Part of that responsibility means providing a remedy for exploited workers by reimbursing the debt they've taken on to join their workforce.

"As well as addressing abuses they identify, contractors need to be part of the solution - proactively preventing labour abuse in their contracting chain. This means using their leverage across the industry to ensure recruiters who charge migrants fees face meaningful sanction, are no longer able to secure contracts and are referred for investigation by the authorities."