Home
NEWS
MEDIA
Supplements
Tenders
Notices
“Efficiency, accountability, order, and rule of law are not reserved only for developed or well-resourced countries."

“Efficiency, accountability, order, and rule of law are not reserved only for developed or well-resourced countries."

KIGALI - African health actors have urged governments on the continent to prioritise healthcare and increase its funding in order to mitigate preventable deaths.

The actors are gathered in Kigali, Rwanda for the Sustainable Development Goals Center for Africa (SDGC/A) conference at Kigali Convention Centre.

The two-day meeting that kicked off on Thursday is  focusing on accountability framework as a necessary tool  to achieve the SDG3 in Africa.

The SDG3 aims at ensuring healthy lives and promoting well-being for all at all ages.

Participants are also discussing how data can be used, as well as how research and development give rise to long-lasting accountability systems and mechanisms in health.

The meeting hopes to pinpoint appropriate solutions to ensure proper functioning of the healthcare system.

Dr Belay Begashaw, the director general of SDGGC/A, said accountability, service delivery and funding are key in the health sector.

He said everyone has a right to a standard of living adequate for the health and well-being of themselves and their family.

"However, despite global declarations and goals, government commitments and pledges, calls,  actions and targeted interventions,  many health issues that are no longer issues in other countries continue to be huge issues in Africa," he told the meeting.

Dr Takao Toda, the vice-president of human security and global health at Japan International Co-operation (JICA), said excuses should not be made.

"Efficiency, accountability, order and rule of law are not reserved for the developed or well-resourced countries," he said.

"Political and government actors need to change their mindset and adapt the uncompromisable stance that they can and must use their countries' resources well and impact on their people's health." Toda added: "They must believe and do things responsibly and efficiently, and must begin to take deliberate steps to build and maintain accountability in their institutions and health professionals."

According the JICA boss, the collection, analysis, use and transparent dissemination of essential health information, such as death audits, are the absolute bedrock for any accountable health system.

Zouera Youssoufou, the chief executive of Dangote Foundation, said it is high time African governments stop depending on the private sector and donors to fund their healthcare system.

"We know it is the responsibility of governments to fund healthcare, but unfortunately they have left the duty and responsibility to private sectors and donors, who are supposed to supplement governments' efforts," she said.

Youssoufou hailed Rwanda for setting up a health insurance scheme for everyone that has enabled everybody access better healthcare.

"Rwanda is is role model that other African countries should emulate in ensuring that all citizens, without discriminating against gender and social-economic factors, have uniform healthcare services. This will prevent the rich seeking healthcare in the developed world and also build capacity of our medical personnel," she said.

Dr Daine Gashumba, Rwanda's health minister, asked stakeholders to start the conversation on how governments can improve healthcare from communities to the national level.

She said it is equally alarming that national and international institutions neither collect nor report on the degree of negligence.

"How do we use the data we have to co-ordinate health-related activities and use the little resources we have to improve our healthcare in Africa? This is the kind of discussion that Africa needs to start to accelerate healthcare on the continent," she said.

Gashumba also said whether the data exists or not, hospitals and health officials should not be held accountable for all avoidable deaths, poor hospital or clinic administration and negligence. 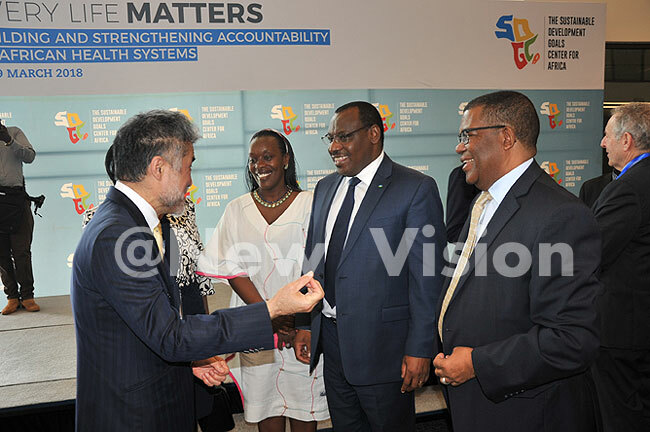 The east African nation has decentralised the system to lower levels to enable communities demand accountability in healthcare.

"The world is going digital and this particular tool has improved on maternal health and reduced maternal mortality. Rwanda is moving to implement integrated financial management in the health system," he said.

According to the World Health Organisation (WHO), in 2015, roughly 303,000 women died during and following pregnancy and childbirth.

Almost all maternal deaths (99%) occur in developing countries, with more than half of those deaths occurring in sub-Saharan Africa.