KIBOGA - President Yoweri Museveni has revealed that the decision to amend Article 102(b) of the Constitution was actually provoked by opposition politicians.

Museveni said the ruling National Resistance Movement (NRM) was not yet bothered by the constitutional provision capping the presidential age limit between 35 and 75 years, until opposition politicians launched a campaign dubbed Togikwatako (in reference to not to amend the Constitution).

"By the way, it is the Opposition that provoked us. They said that thing Togikwatako… and we said aahh… Togikwatako!" Museveni reminisced amid a cheering crowd in Kiboga district on Sunday.

"Now they are busy threatening the 317 young fighters in the struggle to change their country, but we shall not accept that. Let me tell you, you (317 MPs) are the new historicals," Museveni said.

He made the remarks during an NRM feast to celebrate the successful amendment of the Constitution.

Last year, 317 NRM MPs voted to amend the Constitution to scrap the presidential age limit, change their term of office and local government leaders from five to seven years and reinstate the two-term limit.

The Private Member's Bill by Raphael Magyezi (Igara West) attracted applause and criticism alike, with opposition lawmakers arguing that it had opened floodgates to life presidency.

Museveni, who will be above 75 years in the next general election, will now be free to contest for re-election.

Describing them as the new historicals, Museveni explained that "each battle has its own style".

"For us, we went to the bush in 1980 to secure political stability, but these ones were engaged in a battle of mere papers and voicing yes. We congratulate them for envisioning Uganda's future." 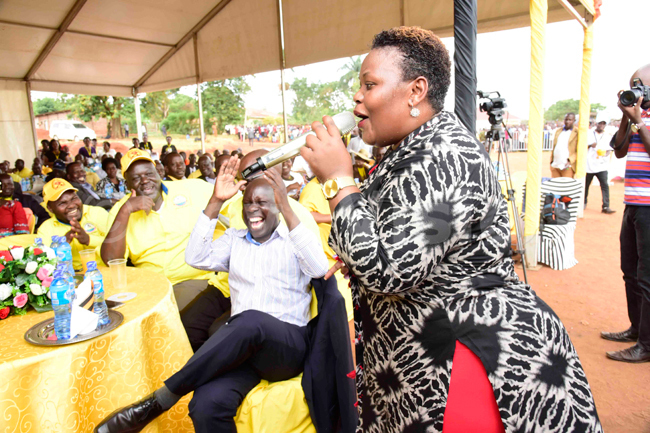 The President revealed that after the Constitution had been amended, he received calls from the businesspeople, thanking him for averting the tense political atmosphere that had been created by those opposed to the idea that had caused a level of discomfort within the business community.

On her part, the Government Chief Whip, Ruth Nankabirwa (Kiboga Woman MP), announced that the NRM leadership should now brace for a countrywide tour mobilising Ugandans for a national referendum that will realign the new seven-year term of office of MPs with that of the president that is still at five years.

Uganda's law books require a referendum to change the president's term of office. President Museveni was re-elected under the five-year term arrangement in 2016.

Meanwhile, the NRM secretary general, Justine Kasule Lumuba, justified the current restructuring of the NRM secretariat and laying off of over 350 staff, saying it is meant to strengthen the party structures for the coming referendum and Local Council One and women committee elections, which she said are crucial.