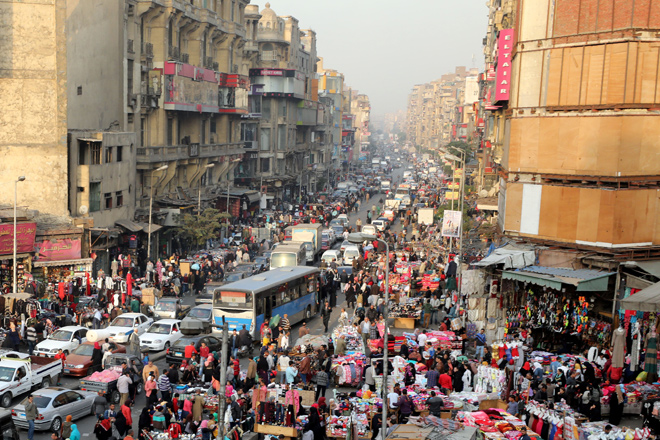 With 96 million inhabitants -- and 9.4 million expatriates -- the Arab world's most populous country adds 1.6 million people every year to its population

A picture taken on December 12, 2017 shows an elevated view of al-Attaba district on the edge of downtown Cairo, Egypt. Egypt is the most populated coutry in the Arab world with some 96 million. AFP photo

Ali Abdelaziz sees children as a "gift from God", so much so that he has 10 of his own, even as Egypt's government struggles to stem a "catastrophic" population boom.

Abdelaziz works in the capital as a doorman, but his children stay in a village with their mother in the southern province of Minya where life is cheaper.

Egypt's overpopulation is adding pressure on the economy, already reeling from the political and security turmoil since the 2011 uprising that toppled former president Hosni Mubarak.

With 96 million inhabitants -- and 9.4 million expatriates -- the Arab world's most populous country adds 1.6 million people every year to its population.

At the current rate, Egypt's population will reach 119 million in 2030, according to a May report by the United Nations Population Fund.

With 95% of Egypt's land uninhabitable desert, the population is concentrated around the narrow Nile valley and Nile Delta, with smaller numbers along the Mediterranean and Red Sea coasts.

A fall in mortality rates in the early 1970s further boosted the population growth.

In Cairo, a megalopolis of nearly 20 million inhabitants, the population density is around 50,000 inhabitants per square kilometre, or nearly 10 times that of London.

President Abdel Fattah al-Sisi has said population growth is "a challenge as critical as that of terrorism".

The government launched a new family planning campaign this year under the slogan "two are enough", to try to contain the phenomenon.

"Children are protection: they care for their parents when they grow older," said Abdelaziz, the doorman, unconvinced of the campaign.

But Hayam Mohamed, a mother of three, does not want more children and uses a government family planning centre in Umm Khenan village of Giza province.

"I don't want my children to feel deprived," Mohamed, 32, said after receiving her contraception pills, free of charge, from the centre's doctor, like many others in her village.

"Education is expensive, and life has become difficult with the rising prices."

Fardous Hamed, a doctor at the centre, told AFP that the number of people seeking its services has risen with the latest round of price increases since authorities floated the pound in November 2016.

Following the currency flotation, the pound lost more than half its value and inflation jumped to 33 percent in September.

"If I give birth to five or six children, I won't even be able to provide them food," said Mohamed.

Abu Bakr el-Gendy, the head of Egypt's state statistics bureau which carried out the latest census, described the current rate of population growth as a "catastrophe".

The rate must be at least three times lower than economic growth for people's living standards not to deteriorate, according to Gendy.

But "the more poverty increases, the more the reproduction rate increases because parents consider children as a source of income," with many children joining the labour market at an early age, he said.

It is the result of "politicians neglecting the issue since the middle of the previous decade", said Mona Abu el-Ghar, an obstetrics and gynaecology professor at Cairo University.

"The problem needs to be taken more seriously with constant media campaigns on radio and television to raise awareness on the importance of family planning," said Abu el-Ghar.

These campaigns, she said, need to be sponsored by the authorities as well as by the Al-Azhar institution, Egypt's top Islamic authority.