The veteran politician dies after being hospitalized for about three weeks at Nakasero Hospital.

He was being treated for a stroke which had affected part of this body, including the brain.

State minister for primary education, Rosemary Nansubuga Seninde confirmed Ssebana's death and told reporters at the Media Centre in Kampala that the veteran politician and businessman was a "man of all people" and that "he will be greatly missed".

She said he was a "pillar to this country".

Meanwhile, it is understood that the elderly politician's health deteriorated Sunday evening at Nakasero Hospital where he had remained hospitalized for the last three weeks. His condition worsened so much that he had to be put back on life support.

Earlier, he had started improving following the stroke that had left the right half of his body paralysed, and had started to regain his strength. But mid-last week, his health again took a plunge. Ssebaana has been one of the longest-serving politicians in Uganda, with his political career spanning decades

'We were unable to revive him'

Dr. Joseph Okia, a specialist in critical care at Nakasero Hospital, told reporters at the health facility that Ssebaana breathed his last at about 10.30am local time Monday.

"When his heart stopped, we tried to revive him but unfortunately we lost him," he said.

"He fought well and our prayers are with his family and loved ones."

When Ssebaana was admitted at Nakasero Hospital as an emergency case, Dr. Okia was put in charge of him, helped by a team of other specialists including a neurosurgeon, a neurologist as a well as a cardiologist, whom he described as the best in the country.

Last week, Buganda's Katikiro Charles Peter Mayiga visited Ssebaana in hospital where he called on the public to continue praying for him to recover. A former Kampala Lord Mayor, Ssebaana's vast political experience also saw him serve as president of the Democratic Party from 2005 to 2010.

He also played a role in the education sector, having been a member of the University Council of Ndejje University.

More remarkably, he is one of the few politicians on the land whose political career stretches as far back as the pre-independence times.

Busiro East MP Medard Sseggona Lubega told reporters at Nakasero Hospital, after the news emerged, that Ssebaana will be remembered for being a consistent and persistent person.

He also described the fallen politician as a selfless individual. Ssebaana took a shot at the 2006 presidency as DP flagbearer. Here, he is pictured combing Ibanda for support

Born in 1934, Ssebaana went on to study at King's College Budo and later at Makerere University.

He also held a Masters of Arts degree in Economics received from the University of Oregon in Eugene in the US.

A career spanning more than 50 years then saw him engaged in civil service as well as politics through Uganda's different regimes, including Idi Amin's, Milton Obote's and the current President Yoweri Museveni's rule.

From 1977 until 1980, Ssebaana worked as the chairman of National Insurance Corporation, after which he was elected member of parliament for Kampala South.

He was also shadow minister of foreign affairs between 1981 and 1985, during which he was also Acting Leader of the Opposition. 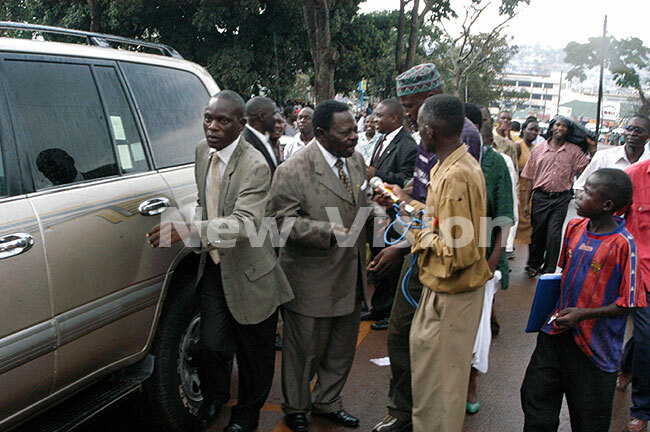 Kampala Lord Mayor Ssebaana took some pounding by the rain to spare some time for the press at the Central Police Station in Kampala in November 2005. He has been described as a selfless person.

He followed that up with being minister of housing and urban development from 1989 to 1991.

A Constituent Assembly drew up the 1995 Ugandan Consitution. Highly experienced Ssebaana was a member of this group, serving on it as MP for Makindye East. His vast political journey would later see him twice elected Kampala Lord Mayor (between 1998 and 2006). This role was a sort of a ping-pong affair with Hajji Nasser Sebaggala.

At first, Ssebaana replaced Sebaggala in 1999 before tables turned and he was replaced by Sebaggala himself in 2006.

Another chapter of his political career saw Ssebaana run for the top seat in the 2006 presidential election as DP's flagbearer.

Also known for his business acumen, Ssebaana established several businesses including Statewide Insurance Company (SWICO), Uganda's first private insurance company. He has, until the time of his death, been serving as the firm's chairman of the board.

LINK: Why Ssebaana contested for presidency

Various politicians, in their respective capacities, have continued to pay tribute to the veteran leader. Others have taken to social media to pen their messages for the fallen politician.

The news was sad to hear. Rest in Peace, Ssebaana Kizito. pic.twitter.com/afG9dNpz5k

We regret the sad news of the demise of veteran politician and former DP President John Ssebaana Kizito! May His Soul Rest in Peace.

Quite an amazing gentleman the late John Ssebaana Kizito has been. Met him in April this year.
May his soul rest in peace. pic.twitter.com/pb3sVRI6aM