Home
NEWS
Media
Supplements
Tenders
Notices
“I am not a politician, because the word 'politician' does not represent me," says MP-elect Robert Kyagulanyi.

“I am not a politician, because the word 'politician' does not represent me," says MP-elect Robert Kyagulanyi.

"If opportunity closes the door, I will walk through the wall."

KAMPALA - Newly-elected Kyadondo East MP Robert Kyagulanyi, best known as Bobi Wine, has said he is not a politician, preferring to instead "be identified as a leader".

In an extensive interview on local TV at the weekend, the first-timer in elective politics said according to him, politics represents something different.

"I am not a politician, because the word 'politician' does not represent me. The word politics, to me, represents a different thing. I would rather be identified as a leader."

Bobi Wine's comments came only days after he won a hotly contested by-election that featured seasoned politicians. One of his challengers was William Sitenda Ssebalu of the NRM and the other was FDC's Apollo Kantinti, who previously occupied the seat, before a successful court petition saw him (Kantinti) lose it last year, effectively paving way for a by-election.

Following his landslide victory on Thursday, 35-year-old Kyagulanyi has also revealed that he expected to win because "I believed it".

"But of course, I was a little nervous - did these people understand what I said? Was I able to awaken their conscience? Did I communicate to them well? Did they actually believe it? But again, after the elections, I realized 'yes, now they know what I meant'," he told the NTV interview. 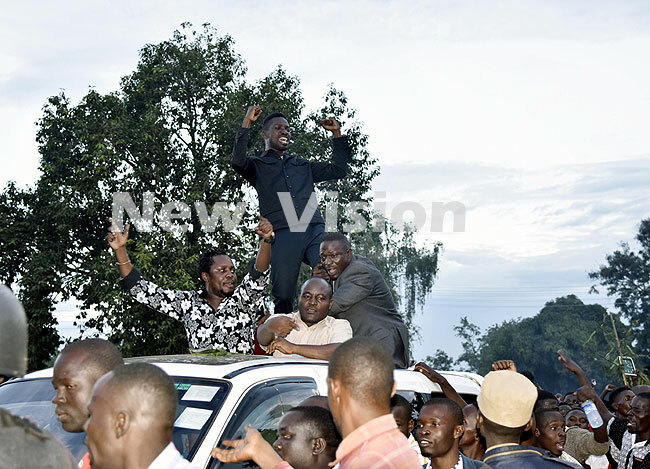 So what motivated the Kamwokya-born-and-raised Kyagulanyi to venture into elective politics?

"As a person, I grew up not wanting to associate myself with politics because I grew up in the era of bad politics, where politics meant trouble, meant death, meant division, meant all negative things. However as I grew up, I started seeing things that I kept hoping somebody would stand up to. But again, I am getting older and older and nothing is changing. So I realized if I want some change, I have to be that change. And before I knew it, I was planning for an election."

Wine, who beat his opposition fair and square, garnering 25,659 of the 33,310 votes cast, said he his options had kept running out.

"I had been thinking about it but after the 2016 elections, I must say at first it was kind of an emotional decision. You see I had wanted to keep out of this but again, options kept running out. And after the 2016 elections, I looked around and said 'Yo, how can this go unchallenged?' So I said, if nobody is going to deal with this, I am going to deal with this."

‘I don't belong to any party' 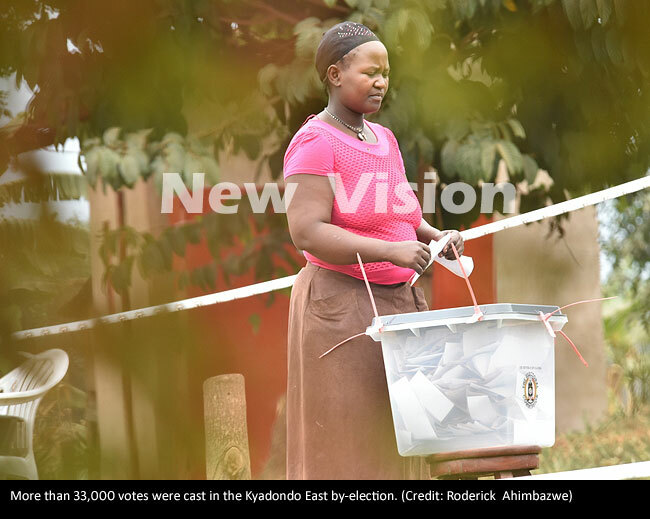 His impeding victory was clearly scribbled all over the blackboard that the FDC party conceded defeat hours before the announcement of the final results, with party stalwart Dr. Kizza Besigye using Twitter to also congratulate him.

But then there had reportedly emerged claims from within the FDC party branding Bobi Wine an opportunist, for having reportedly ignored party calls for him to delay his decision to stand until 2021.

"I don't belong to any party. However I was born in a DP [Democratic Party] family and I cherish truth and justice that they stand for, but I was not fully represented by its leadership. I respect the FDC party and I am personal friends with Dr. Besigye and I have stood with them in all their operations, especially when I see that they stand for what is right." 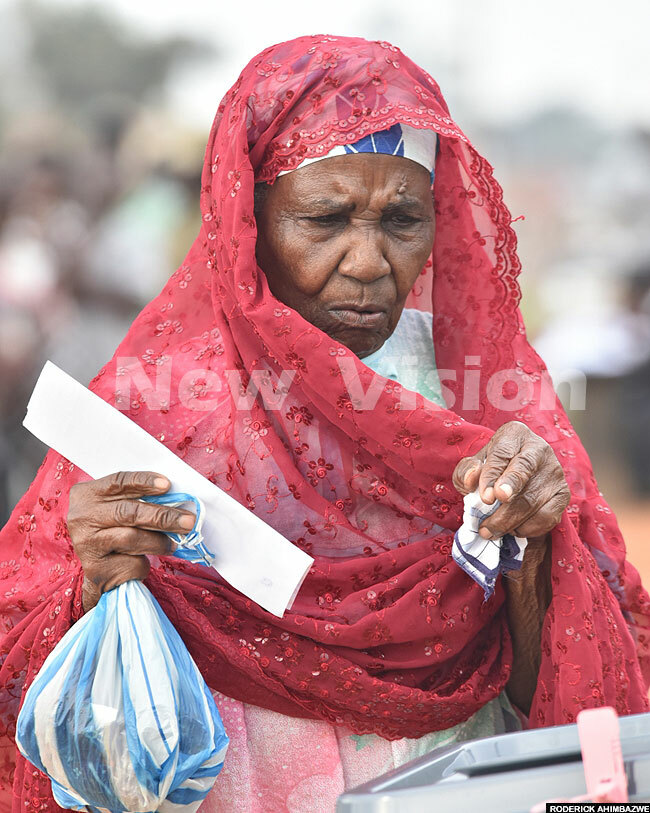 So did he feel let down by the FDC party for not backing him?

"I would have been disappointed if I expected too much. But I am this kind of person that does not expect too much from people. Of course there was a little disappointment, because you know from the party, it has always been said by Dr. Besigye that what Uganda needs today is not just the parties, but Ugandans to come together and change what they have to change," said Bobi Wine.

"But to defer from him a little bit, I believe that Ugandans should change the way they think, and the way they look at the possibilities of change: seize the opportunity of democracy and maximise it." 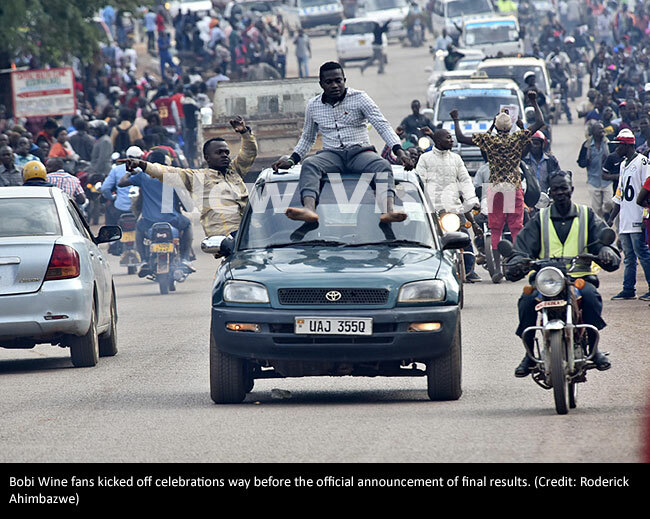 The NRM, through secretary general Justine Lumumba, also conceded defeat to Kyagulanyi before the declaration of the winner by the Electoral Commission. The party's flagbearer in the by-election Ssebalu managed only 4,556 votes and although he later said he was happy that the NRM had beaten FDC in their own area (Kantinti got 1,832 votes), he went on to voice his dissatisfaction over Kyagulanyi's victory.

He told reporters the day after the elections that he was not convinced and that he would engage his team over a potential next move.

Bobi Wine joins a list of other Ugandan entertainers who have made their way to parliament, including, more recently, musician Judith Babirye (Buikwe Woman MP) and comedian Kato Lubwama (Rubaga South). But he says he has come to the August House to be "different".

"I am just like another street guy who walks in parliament and says 'I have a formal opportunity to say this, I'm going to say it.' I am going to parliament to preach even to the MPs, but again to connect the common man to the parliament. I am sure the media will be there, and you'll see what I will be talking about. And I want the people from other constituencies to start demanding their MPs to say the same.

Bobi Wine went on to say that he wants to help young people have the spirit of ownership of their country.

"Right now, involvement is important, like getting people involved. Well, I don't expect too much from the parliament inside. But being an honourable member of parliament, I will say what I have been saying through my music, more confidently. I will be able to preach to the young Ugandans to get involved. I am not saying I am going to be the solution to everything. I just want to evoke the spirit of involvement, of ownership for these people to own their country. To give them more confidence that they can actually stand up to what is right and they can be supported.

"I am not coming in to be another kind of politician. But I want to learn from the different people, and to do things rightly. Because these guys who are in parliament are smart, they just need to have. . . they have good heads, they only need to have good hearts." 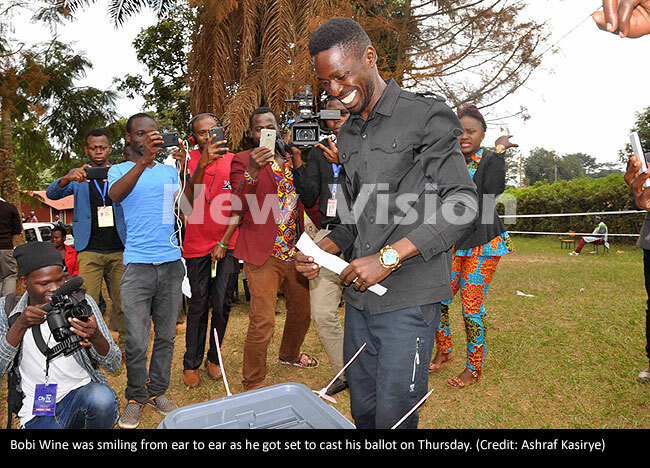 He is best known for his music, a reason majority of Ugandans identify him better with the ‘Bobi Wine' brand. But Kyagulanyi juggles a bunch of other things, and says music "does not consume even 10% of my time". He is studying as well (law).

"I am also a trader, a farmer, I do different things to survive. I am blessed with a talent (music), that I can do a song overnight. Music is a hobby that I turned into a job of sorts. I don't study every day. I went back to school because I want to get more knowledge. And then parliament does not consume all week. It does not consume all the time.

"It's (studies) going on good. We have exams on Monday. It's crazy [he laughs]. I was in studio, I did my album, maybe I will release it sometime after this craziness goes down," he said, adding that now that the election is done, there is "less stress".

‘We all have a history'

On his reputation of doing drugs . . .

Kyagulanyi said: "[Former US president Barack] Obama smoked marijuana before. [Kenyan president] Uhuru Kenyatta smoked marijuana before. I have seen so many people, even big shots in our government, that have smoked marijuana before. That was my life then, I grew up from Kamwokya, I beat guys in the club, you've seen that on the news before when I was growing. I have grown up in the camera. But everybody has grown up somewhere, they have their story. I have grown through this to the man I am today, and I have learnt a lot from it. And that is why I present myself - so I can turn other guys exactly into what I have turned into. Yes, you know all these crazy things about me, but look what I have turned into.

A life in one sentence

"This is Bobi Wine for you: A guy that was born in Kamwokya, grew up, went to school, met Barbie (wife), transformed, has a family, wedded his wife, went back to school, came and ran for member of parliament, and now he is a legislator. Does that show you any transformation? Does that show you that I am a new person? Does that answer your question? Thank you very much! [bursts into laughter]." 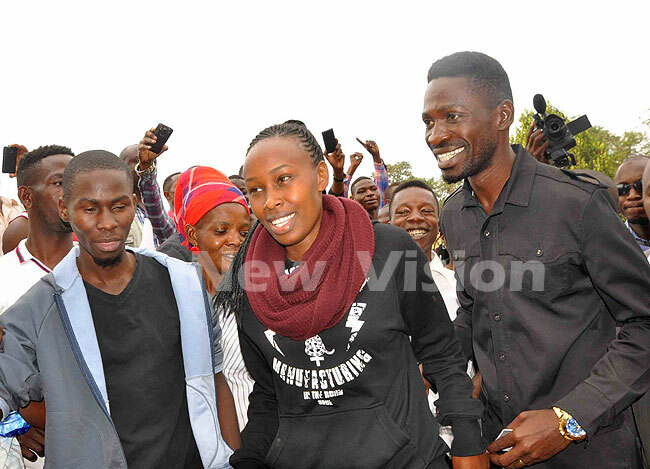 On fellow musician Bebe Cool's reported comments that musicians who go into politics are only after money . . .

"Well, not everybody thinks as I think, and that's why not everybody supports me. With all due respect, Bebe Cool is my old comrade, we grew up together in the music industry. But we don't grow up at the same pace, and we choose priorities. I have lived my life in segments. I learn new things and I open myself to transformation. I don't know what I am going to be tomorrow, but at least I am glad and proud of what I am today," said Bobi Wine.

"[Him and Bebe Cool] We see things in a different way and have different priorities. I respect him for what he is, I don't know what he thinks about me but I think what I am today is more useful to my family and my country than what I was yesterday. I am not into leadership for the money or for politics, as you would like to call it. I made sure I make enough money before I go into leadership. If his [Bebe Cool's] idea is going into politics for the money, then I beg to differ.

'Fellow artistes have a lot of hope in me'

On the task at hand, Kyagulanyi was keen to say that it's not a novel experience on his part.

"This responsibility is not new. I have been talking for my people through my music. It's only more formal that I am going to do it in parliament and I hope to get more formal attention and I am optimistic that it will bear results.

"I believe that my comrades in the music industry have lots of hope in me. And I always love to look at examples. Look at the Nigerian music industry, how it's booming and how its creative people - the artistes and the authors - are earning from it and prospering. Dig deep into their legislation on what makes them tick, take a few things, learn from them. Bring them [lessons] to Uganda. I am this kind of guy that likes to copy good things. Emulate them. Bring it into your legislation," he added. 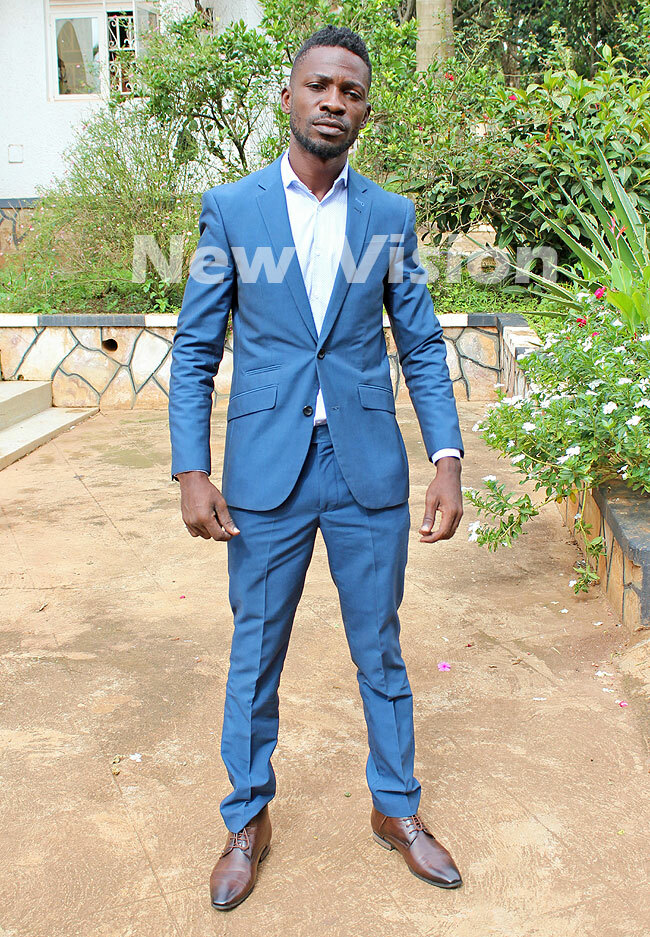 "I would rather not cross bridges before I reach them," underlined Kyagulanyi.

"As of now, I am focusing on representing the people of Kyadondo East. I am 'Ghetto president', so I am president already [laughs]. How about we first deliver on the responsibility that has been entrusted on us?

"When they give you a piece of chicken, eat it well. If you eat it well then you can talk of other things."