President Yoweri Museveni has urged Ugandans that have evaded, cultivated and settled in wetlands, forestry reserves, river banks and lake shores to leave them peacefully and save the country from disaster.

The president was speaking at a public rally at Rushoroza Seed School in Kihihi sub-county in Kanungu district shortly after his impromptu tour of Kameme village, which is worst hit by drought and famine.

The President also toured Ntungwa River in Kihihi sub-county, which separates Kanungu from Rukungiri district and directed the State House Comptroller Lucy Nakyobe Mbonye to immediately ensure the establishment of an irrigation scheme using solar water pumps to enable the area do agriculture all year round without relying on natural factors.

He also said that government would construct valley dams in Kanungu to boost water sources in the district. 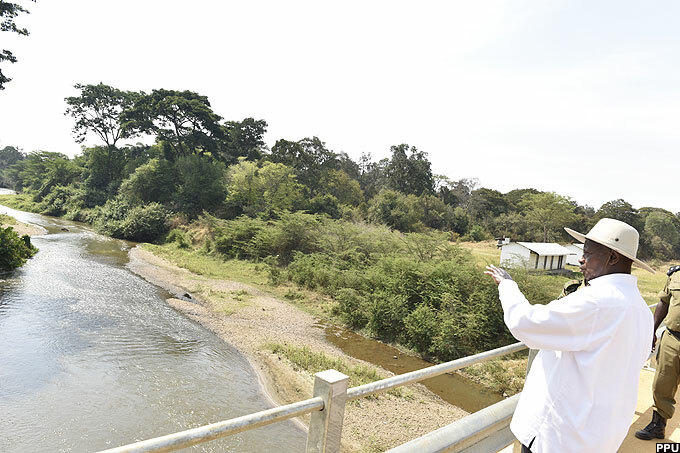 Kanungu district has been hit hard by famine as a result of long drought spells in the past three years, degenerating into a humanitarian crisis.

The continued environmental degradation resulting into a drop in the rain patterns is as a result of the attack on these God-given natural resources by the population.

Museveni assured Ugandans of continued government support to mitigate the hunger crisis but said that Kanungu district, just like many other parts of Uganda, has experienced unprecedented drop in rainfall in the recent past due to the attack on the swamps, wetlands, forests, lakes and rivers that contribute 40% of the rainfall the country receives.

He said that the drop in rainfall greatly affected agricultural production in most parts of the country, creating unprecedented hunger and famine. Museveni displays a new early maturing and drought-resistant maize variety which has been recommended by scientists for Kanungu region. This was at a rally in Kihihi 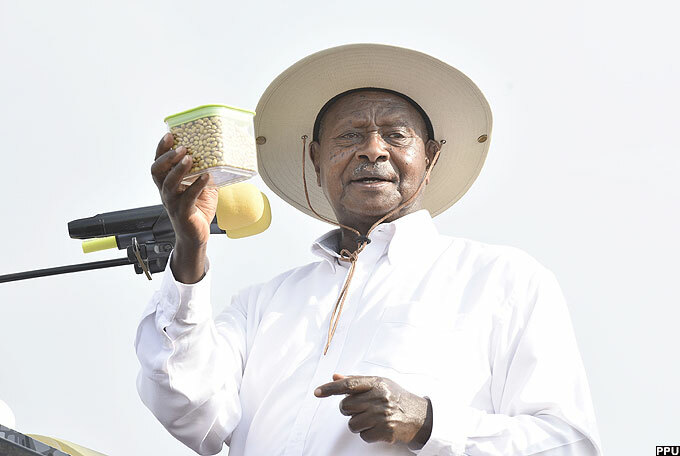 He said that to avert a food crisis and famine, all people who have evaded and degraded all rain and water catchment areas should peacefully vacate them but warned that government will not stand aside as spectators while people continue to degrade the environment and attacking agriculture which is a source of food, employment, income and livelihood of majority of Ugandans.

"God created all these physical features, land, forests and water bodies with a good purpose for humanity but we are pre-occupied with destroying them and you can see the results. Please leave them peacefully.

"The National Resistance Movement [NRM] does not believe in the use of force. Religious leaders and other stakeholders should join hands with government to sensitize the population on the dangers of environmental degradation for the good of our country and the future generations," said Museveni.

He warned the population against misusing the provided planting materials, which he said will go against the government's fight against hunger and famine in the country. He advised them to grow income-generating crops to improve their incomes and get rid of poverty.

President Museveni used the occasion to commend religious institutions in Kanungu district led by Bishop Dan Zoreka for joining hands with government in mobilizing and providing relief to the population that desperately need food.

Agriculture minister Vincent Bamulangaki Ssempijja said that his ministry has conducted research and produced fast-yielding and drought-resistant crops that can mature in two to three months that can avail food to the population in short period.

He appealed to the local council leadership in the area at district and sub-county level to pass strong bylaws against the misuse of seedlings provided by the government.

Ssempijja also called for a tree planting campaign to better the environment and increase the chances of rain formation.