KAMPALA - It was chaotic scenes in Kasangati Tuesday mid-morning after police blocked a campaign rally by candidate Robert Kyagulanyi, best known as Bobi Wine, and took him into custody.

It was not immediately clear why he was arrested. But what is certainly clear is that his supporters were angry and frenzied, demanding his immediate release.

They were seen chanting slogans of support for their candidate, who is contesting in the Kyadondo East by-election as an independent, and wanted him set free.

Some were seen hurling stones at the security operatives in a muddled confrontation between the two groups. 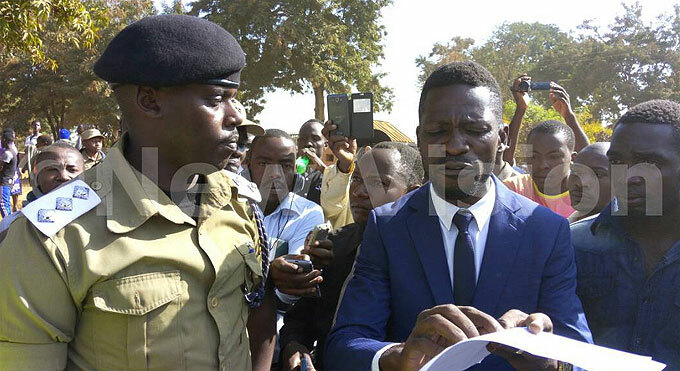 Bobi Wine's campaign manager Samuel Walter Lubega, a former presidential candidate himself, told reporters moments after his arrest that he had been denied access to him.

"What kind of preventive arrest are police talking about when Bobi Wine was about to address his supporters?" he is quoted to have furiously said.

Following his arrest, Bobi Wine was later driven off on a dusty road to Kira Police as his effervescent supporters followed amid a tempestuous atmosphere.

Once at Kira Police, Bobi Wine's wife Barbie, wearing a gomesi (traditional Ganda outfit), appeared and was scrambled through the police ring to go see him as his supporters remained blocked from going through.

The contestants are in the evening of the campaign period ahead of Thursday's election.