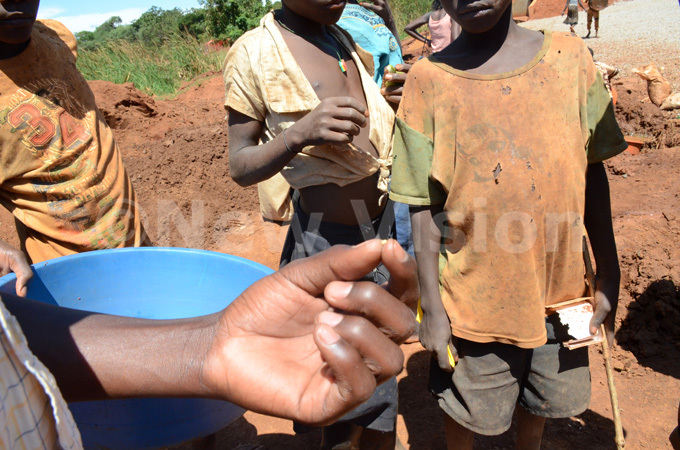 A man displaying a piece of gold at Budde in Bugiri district. Photos by Pascal Kwesiga

Standing in a pit filled with dirty and stagnant water in Bukana fishing village on the shores of Lake Victoria in Namayingo district, Pamela Atieno, 40, looks frustrated.

A single mother of four scoops crushed ore from the bottom of the pit with a basin and searches for gold in the container (basin) with her bare hands.

She has been searching for the world's priceless resource in the muddy blend of water and ore for hours through the Friday afternoon and part of the evening, but is yet to find gold. 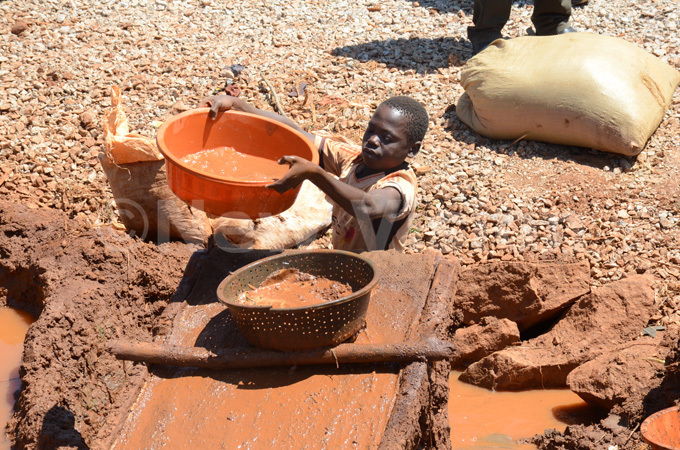 However, as night falls, tiny yellow and white metals appear at the bottom of the basin she has used repeatedly to scoop ore and water from the pit during her all day long gold search. A smile that had eluded her for several hours finally appears on her face.

"This is a business of hope. You keep working hoping to find gold at some point. It is not an essay kind of work, but there is nothing that can be achieved without toiling," she says. 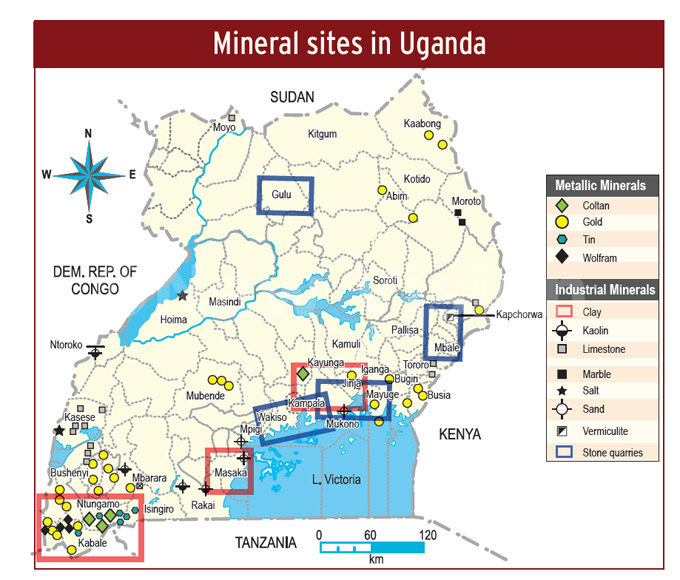 But searching for gold in a mixture of water and crushed ore seems to be the simplest task in a series of tasks that she performs daily in the search for one of the world's precious resources.

A typical day's work for Atieno, who was previously a peasant in Busia district before relocating to Namayingo two years ago, begins at 7:30pm.

Armed with rudimentary items such as a pickaxe and a spade, she enters a gold mining pit which is about 10 meters deep to mine gold. While in the pit where her view is partly obstructed by the dark, Atieno uses the pickaxe to break pieces of ore rocks that contain gold.

She stuffs the pieces of ore in a plastic container and pulls it from the pit using a rope. Outside the pit, Atieno crushes the pieces of ore into powdery state, and moves it (crushed ore) in sacks to a pit near the lake's shoreline where she embarks on the task of trying to extract gold from the (ore) using water.

Atieno is not alone. There are scores of women and men who have resorted to mining in the current gold rush being experienced in the country to search for the precious mineral tucked away in the ground. 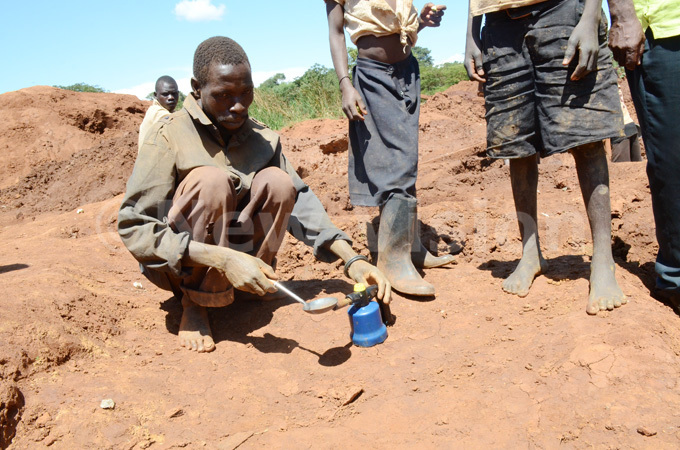 A man extracting mercury from a piece of gold by heating it up using a gas stove in Bugiri district.

They have abandoned other economic activities they were previously engaged in such as smallholder agriculture and embraced gold mining in the hope that it could turn around their fortunes.

Many artisans have invested their hard earned little money in gold mining in anticipation of finding the mineral, but several years on the road, they have not recouped their investment. 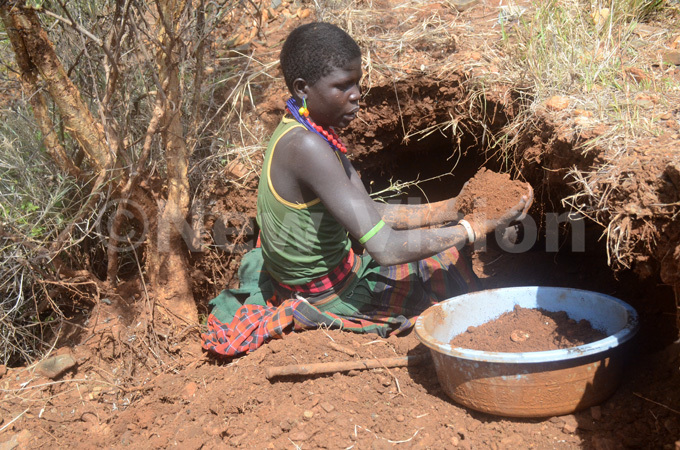 "It is a business of luck for artisans world over. You can strike gold and become a billionaire in a short time, and it is that hope that keeps us going every other day," Henry Nyongesa, 66, an artisan at Simase fishing village on Lake Victoria in Namayingo district, says.

In some areas like Mubende and Namayingo districts, the artisans have abandoned their families and set up makeshift structures in the mines in the hope to cashing in on what is supposed to be a lucrative business.

However, in the mining areas in Buhweju and Karamoja, the artisans currently live in their homes and only go to the mines to carry out the backbreaking tasks in the name of searching for gold daily. 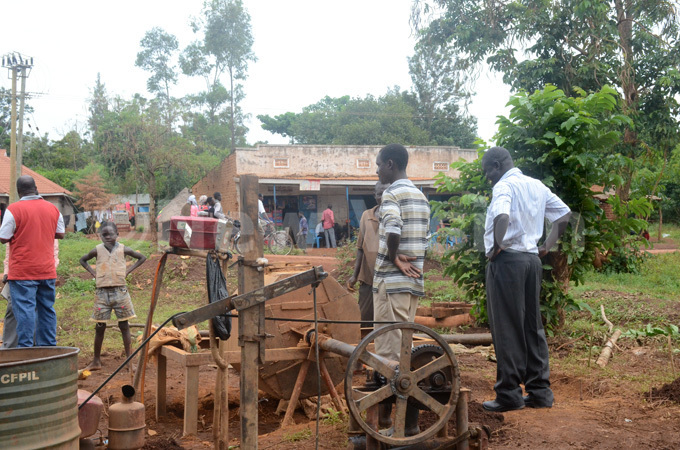 Men crushing ore in a ball mill to extract gold in Tira trading centre in Busia.

"It is only Lolwe, Buswale sub counties and Namayingo Town Council where gold mining is not being done. And 90% of the mining activity is taking place near the Lake," the district chairman, Ronald Sanya, says.

There are no official statistics on the number of people engaged in mining activities at the districts, but the population in most of the mines is huge and continues to grow as more people resort to gold extraction in anticipation of hitting the jackpot sometime soon.

Some of the people have abandoned fishing activity for gold mining on the shores of Lake Victoria, the world's second largest fresh water body shared among Uganda, Tanzania and Kenya in East Africa.

There are about 1,000 people engaged in artisanal gold mining in Simase and Bukana fishing villages on Lake Victoria in Namayingo district.

Always on the move

The Buhweju district senior environmental officer, Clemencia Birungi, says it is pretty difficult to monitor the activities of the artisanal miners because they shift from one place to another many times in a short space of time.

"Sometimes, they settle in one place, start mining and leave for another wetland before we even realize as a district. We only find out later after seeing the destruction left behind," she states. 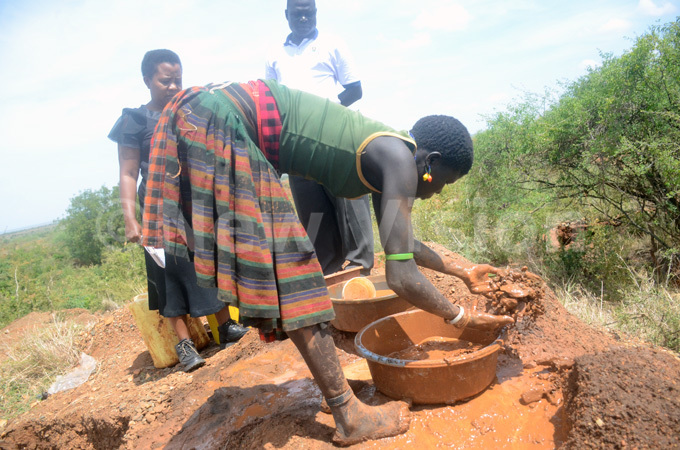 The unregulated activities of the artisanal gold miners also pose serious threats to the entire environmental ecosystem in the graben, including wild animals in the national parks such as Queen Elizabeth.

The artisans claim that their activities are not destructive to the environment because they backfill the pits before opening new ones and moving to other areas.

However at Nyarubingo and Katenga wetlands where miners have tried to backfill the pits after mining, the water is stagnant and dirty. In some areas, they leave without backfilling.

"Our activities are not destructive because we backfill the pits and move to other areas. And the wetland will be restored after sometime," Alex Musinguzi, an artisan miner, says.

However, Burungi, who is also the district natural resources officer, explains that sometimes the miners return to the areas where they have mined before as the search for gold intensifies. She adds that there are close to 10,000 miners in the district today and several mining sites. 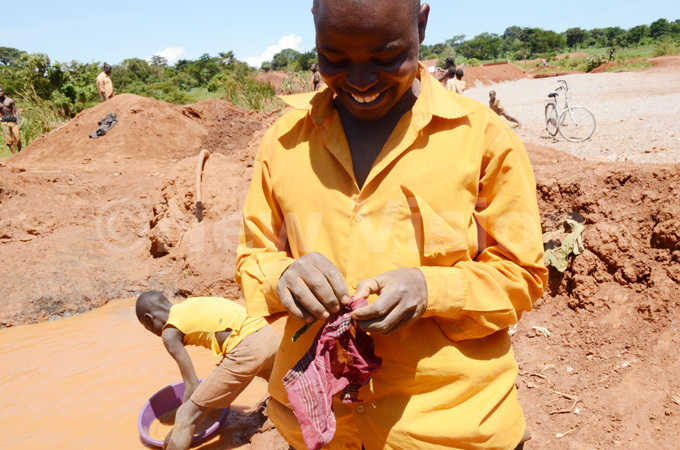 How did they know there is gold?

But Etiang, a fisherman, had previously extracted gold from similar pieces of ore in another riparian district - Busia - years earlier. And when he stumbled on pieces of ore rocks in Simase, he started counting his blessings. 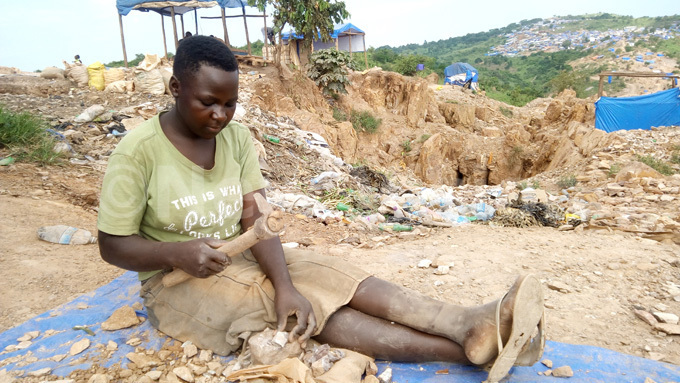 Three years later, Simase is now a gold mine, with about 500 artisans engaged in mining activity. The miners have dug several tunnels in the village in a desperate search for gold.

However, none of the artisans in Simase has ever extracted gold worth a kilogram two years since they started mining in the area.

Some have relocated to other mining areas in frustration. Most of the artisans sell their gold to middlemen in grams and points. The middlemen offer sh100, 000 for a gram and sh10, 000 for a point.

In Bukana fishing village, gold was also discovered two years ago by artisans. Just like in Simase, the artisans, who had previously been mining gold in Busia, stumbled on pieces of ore rocks on top of the soil and announced that they had found the valuable mineral.

Patrick Sande, the chairman of the fishermen-turned gold miner in Bukana, says there are over 500 people involved in artisanal gold mining in the area, and that the number is increasing, with some fishers abandoning fishing for mining. Previously, fish trade was the major economic activity in Bukana and Simase fishing villages, but today, almost everyone, including women and children, are engaged in gold extraction activities - from mining gold, crushing ore in a ball mill to separating the mineral from other materials (in crushed ore) in a blend of water and mercury.

"Most of us were fishermen but we are mining gold now because it is more profitable than fishing. We may not be getting a lot of money from mining today, but we are hopeful that one day huge amounts of gold will be found," Sande says. 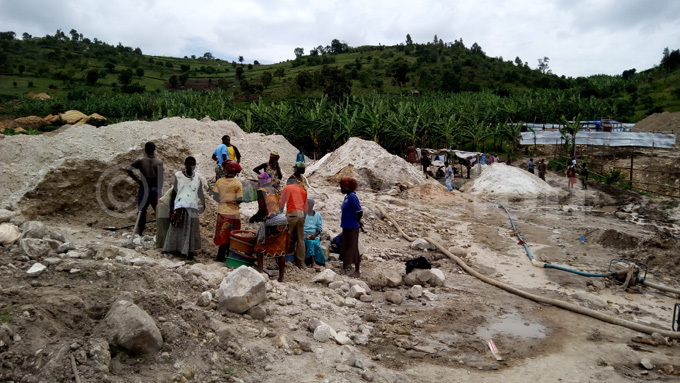 "I was born in Bukana, but I had left this area in search for jobs in other areas. But when I heard that gold had been discovered, I decided to return home to exploit the resource. I have earned less than sh1m from gold mining so far, but I believe I will earn more in future," she adds.

But mining did not start in Bukana and Simase in Uganda. There were mining activities in parts of eastern and western Uganda in the 1970s, but the political turmoil at the time disrupted mineral exploitation projects.

The latest airborne geophysical survey, geological mapping and geochemical sampling by the energy ministry indicate that Uganda has 27 types of minerals in significant commercial viable reserves. For example, Iron ore deposits in Kabale and Kisoro districts are estimated to be over 50 million tonnes.

Before the surveys, the Government had passed the mining policy in 2011 and the Mining Act in 2003 to regulate the sector, but the two documents have been found lacking and are being reviewed to bring them up to speed with the current realities on the ground. The review, among others issues, is targeting the activities of the artisans.

In the absence of a robust legal framework, the ministry is unable to regulate artisanal gold mining, and the activities of artisans are leaving a massive trail of destruction on the environment. 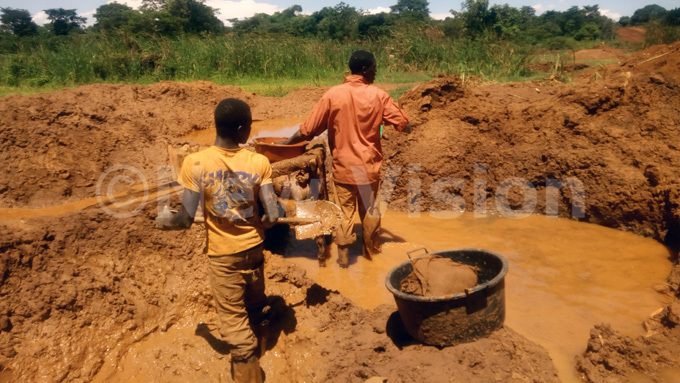 Men extracting gold from ore in a wetland in Budde village in Bugiri district.

Dr. Patrick Byakagaba, an expert in ecological governance at Makerere University, says there is need to for the ministry to expedite the review to protect the environment.

"We cannot do away with artisans, but there is need for a legal framework to regulate them. Some of them could be using dangerous chemicals like mercury to extract gold which is dangerous to the soil and water sources," he adds.

Indeed, most of the artisans use mercury in gold extraction and discharge the wastewater into the water sources. Actually, in Buhweju, people are mining in wetlands because they believe gold is moved from the hills into the swamps by water. Since miners need water to extract gold from ore, most of them carry out extraction processes in the wetlands.

The National Environment Management Authority (NEMA) spokesperson, Naome Karekaho, says monitoring the activities of the artisans has been complicated by the absence of a robust legal and regulatory framework to manage the industry.

"But we are sensitizing the artisans on the dangers of their activities. However, the absence of a legal framework makes it difficult to regulate the industry. We hope the energy ministry which is supposed to regulate mining will complete the reviewing of the law and policy soon," she adds.

The energy ministry permanent secretary, Dr. Stephen Isabalija, says the review of the Mining Act 2003 and policy will be complete before the end of the current financial year.