Dr Stella Nyanzi being helped into a vehicle after securing bail. PHOTO/Meddie Musisi

She is expected to return to court in two weeks' time.

Nyanzi's five sureties were also instructed to sign a non-cash bond of sh10m. They will have to ensure that she reports back to court on May 25.

It is alleged that on January 28, 2017 she used a computer to post on her Facebook page "Stella Nyanzi" and made a suggestion against President Yoweri Museveni which is obscene or indecent under the law.

On Wednesday, Nyanzi showed up at court for her bail application hearing cutting a feeble figure. Seemingly unable to support herself, she was seen being helped out of a prisons' vehicle by female warders and led inside a full courtroom. 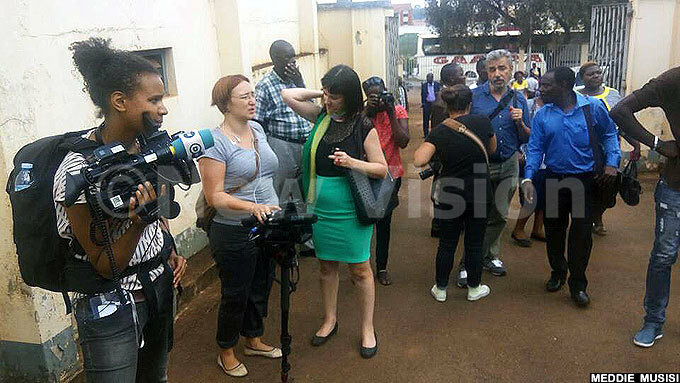 Nyanzi's case has attracted both local and international media attention, as seen here on Wednesday

Prosecution further alleges that between January and March 2017 in Kampala district, Nyanzi willfully and repeatedly used electronic communication to post offensive messages via her Facebook account, transmitted over the internet to disturb the peace or right of privacy of the President with no purpose of legitimate communication.

Nyanzi through her lawyers led by Isaac Ssemakadde petitioned High Court, seeking to halt court proceedings under the MTA.

Nyanzi also wanted court to declare that refusal by the said court to hear her bail application after taking plea was illegal.

Her lawyers therefore wanted court to strike out the application and have Nyanzi released on bail, pending hearing of her case.