Home
NEWS
MEDIA
Supplements
Tenders
Notices
In a petition presented to the Parliament deputy speaker Jacob Oulanya on Friday, Jacob Rumbiak, the leader of United Liberation Movement for West Papua (ULMWP) said they want Uganda to influence other countries in the region to support their bid for independence at the United Nations.

Federal Republic of West Papua’s Jacob Rumbiak (left) hands over a the country's flag to Deputy Speaker of Parliament Jacob Oulanyah , during a courtesy visit to Parliament on April 7, 2017. Photo by Kennedy Oryema

Parliament of Uganda has pledged to support West Papua, a province of Indonesia fighting for independence to realise its dream.

This is after its leader petitioned parliament and presented heartrending accounts of sufferings under the rule of the island nation.

In a petition presented to the Parliament deputy speaker Jacob Oulanya on Friday, Jacob Rumbiak, the executive director of United Liberation Movement for West Papua (ULMWP) said they want Uganda to influence other countries in the region to support their bid for independence at the United Nations.

He told Saturday Vision that he believes Uganda’s strength at African Union (AU) can galvanize the African vote in New York and help them clinch independence by 2019.

Saturday Vision has learnt that besides Parliament, the group also wants to meet President Yoweri Museveni over their bid. 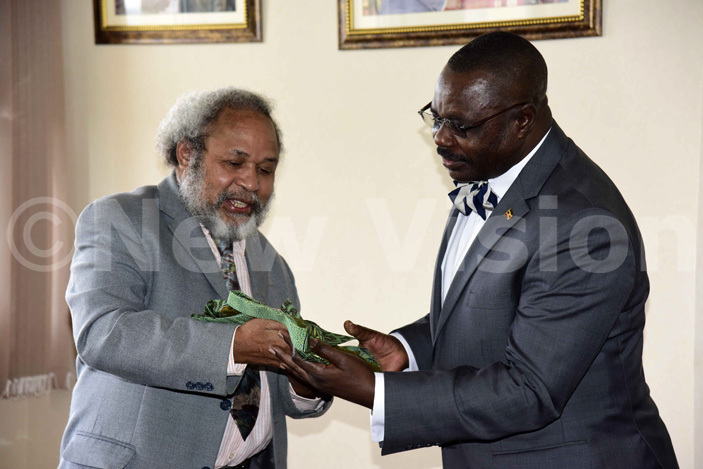 Formerly under Dutch rule, West Papua is fighting to shake off the firm rule of Indonesia, under which it was placed courtesy of a UN–backed treaty in 1969. West Papua maintains that Indonesia’s rule over it is illegal because the UN-sanctioned ballot -- ‘the Act of Free Choice’, which legitimized West Papua as a province of Indonesia in 1969, was fraudulent. Under the act, 1022 people, who were chosen to vote on behalf of the island, were coerced by Indonesian military to vote against the independence bid.

With a land size of 162, 371 square miles, West Papua is nearly twice the size of Uganda. However, Uganda boasts of a population eighteen times bigger and has better human development indicators than West Papua’s two million people according to online sources.

Rumbiak blames the above on an orchestrated genocide and the brutal rule they have suffered under Indonesia since 1969.

He claimed there is a systemic agenda by Indonesia — a Muslim dominated country — to destroy their way of life, and exterminate the Papuans, a black people of African descent. 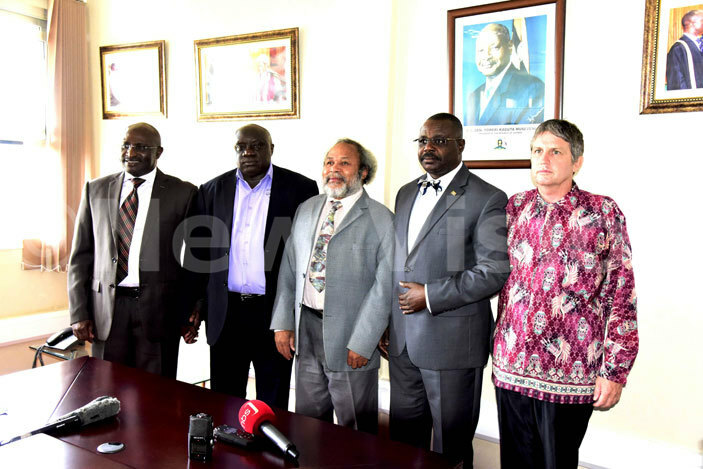 A request for a comment from the Indonesia’s foreign affairs ministry had not been replied by press time.

West Papua blames the West, particularly US, for turning a blind eye to the violations, which they say is a compromise with Indonesia for mining rights in the resource-rich island.

Saturday Vision has learnt that West Papua is pushing for independence via a United Nations sponsored referendum, the way East Timor did in getting independence from Indonesia in 1999.

Oulanyah said parliament was ready to support the group’s cause using its connections with parliaments in other countries. “We will do whatever our parliament and the nation can to ensure that by the end of June this year, that resolutions is heard and discussed in the UN,” he said.

He added: “Parliament can also identify different legislators to propose the motion, support and debate it in House. We can send the resolutions to other East African Parliaments including the Intergovernmental Authority on Development (IGAD) in Eastern Africa countries.”
Deputy Foreign Affairs minister, Okello Oryem, said Uganda was ready to meet the group. “But Uganda and Indonesia enjoy good diplomatic ties and we respect the latter’s internal affairs,” Oryem said.

Oulanyah advised the group to mobilise the young people but through the diplomatic and international protocols in their country to mount pressure on the existing colonizers.

Rumbiak said his country has the largest Gold and copper deposits in world. “It is one of the reasons we are being colonized,” he said.