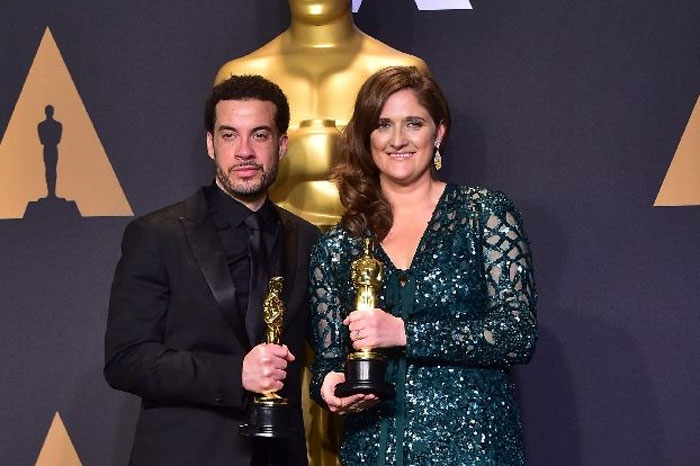 The film is juxtaposed with exploration of domestic violence and racial tensions -- issues that became the subtext of the trial.

PIC: US director Ezra Edelman and producer Caroline Waterlow pose with the Oscar for best documentary feature award for 'OJ: Made In America' during the 89th Oscars on February 26, 2017, in Hollywood, California. (AFP)

A film about the O.J. Simpson murder trial that transfixed the United States two decades ago won the best documentary Oscar on Sunday, with the director dedicating the prize to crime victims.

"O.J.: Made in America," the nearly eight-hour documentary made for the film division of sports network ESPN, researches in depth the 1994 killings of the American football star's ex-wife Nicole Brown and her companion Ron Goldman.

The film, which premiered at the Sundance Film Festival, is juxtaposed with exploration of domestic violence and racial tensions -- issues that became the subtext of the trial.

"I want to acknowledge that I wouldn't be standing here tonight if not for two people who aren't here with us -- Ron Goldman and Nicole Brown. This is for them and their families," director Ezra Edelman said as he accepted the award.

"It is also for others -- the victims of police violence, police brutality, racially motivated violence and criminal injustice. This is their story, as well as Ron and Nicole's," he said.

Simpson's trial was exhaustively covered by the then nascent 24-hour cable news networks in the United States, with public views on the African American athlete's guilt sharply divided along racial lines.

While Simpson, assisted by some of the country's top lawyers, was controversially acquitted on charges of murdering Brown and Goldman, who were both white, he was found liable for wrongful death in a later civil trial.

Simpson, however, wound up in prison as he was given a hefty 33-year sentence for an unrelated robbery at a Las Vegas hotel.

Oscars host Jimmy Kimmel, reacting to the documentary's victory, quipped that he was not supposed to joke about the incarcerated Simpson.

But he said anyway, to a mixed reaction from the crowd: "The simple fact of the matter -- OJ, you get an extra slice of bologna on your sandwich tonight."

Interest in the Simpson case was also renewed thanks to a recent award-winning television drama, "The People v. O.J. Simpson: American Crime Story," in which Cuba Gooding Jr. plays the football star.