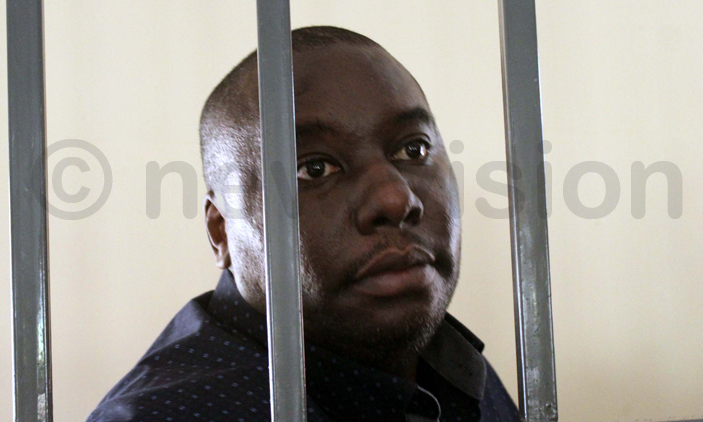 Kabaziguruka pictured in the dock at the Court Martial during an appearance in August 2016. Photo by Tony Rujuta

Nakawa MP Michael Kabaziguruka was rightfully charged before the General Court Martial (GCM) because he allegedly aided and abetted persons to over throw government, the Director of Civil Litigation in the Attorney General's chambers Denis Bireije, has said.

He made the statements in an affidavit filed before the Constitutional Court today.

"As a civilian, Kabaziguruka is alleged to have been aiding and abetting persons subject to military law to commit service offences which bring him under the realm of the General Court Martial" Bireije stated.

He contends that the GCM before which Kabaziguruka has been charged is capable of fairly and accurately pronouncing itself on the charges brought against Kabaziguruka without prejudice to him.

According to Bireije, Kabaziguruka has not shown or demonstrated to court that there is eminent danger which he intends to stop that cannot be compensated by way of damages.

He also argues that all the issues raised in Kabaziguruka's application are of enforcement of human rights which can be handled by any competent court without resort to the Constitutional Court. Bireije added that Kabaziguruka's allegations are unfounded and speculative.

On June 28, 2016 Kabaziguruka together with 23 other people, including soldiers were charged with offences relating to security and treason by court chairman, Lt Gen Andrew Gutti and remanded to Kigo Prisons. The offences carry a maximum penalty of death on conviction.

Prosecution alleges that the accused and others still at large between February and June 2016 at diverse places in Wakiso, Kampala and Luwero districts with intent to prejudice the security or interests of Uganda committed acts of treachery, infiltrate the UPDF and engaged themselves in war like activities against government.

Kabaziguruka had petitioned the Constitutional court, seeking a declaration that the GCM and other military courts were unconstitutionally established.

He contends that these courts are merely tribunals set up for purposes of disciplining errant military officials and not courts of law within the meaning of the Constitution.

Kabaziguruka therefore wants the powers of the military court be limited to only disciplining soldiers rather than charging them (soldiers) and civilians with offences. He also wants court to award him cost of the petition.

He accuses the 6th Parliament  of over stepping its powers by creating section 197 of the UPDF  Act that  establishes  the GCM other than a mere tribunal to instil discipline among UPDF soldiers.

Last year, Kabaziguruka while being tried in court martial objected to it, contending that he is a civilian and was not subject to military law, which was dismissed by GCM on September 13, 2016.

This prompted him to file a suit at the civil division of the High Court, seeking for among others a declaration that his trial by the GCM is a violation of his constitutional rights to a fair trial and an order for his release from custody.

However, On September 16, 2016 High Court Judge Patricia Basaza Wasswa dismissed the application, prompting Kabaziguruka to appeal against the orders of the learned judge at the Court of Appeal.

The case was adjourned to February 28, for hearing.