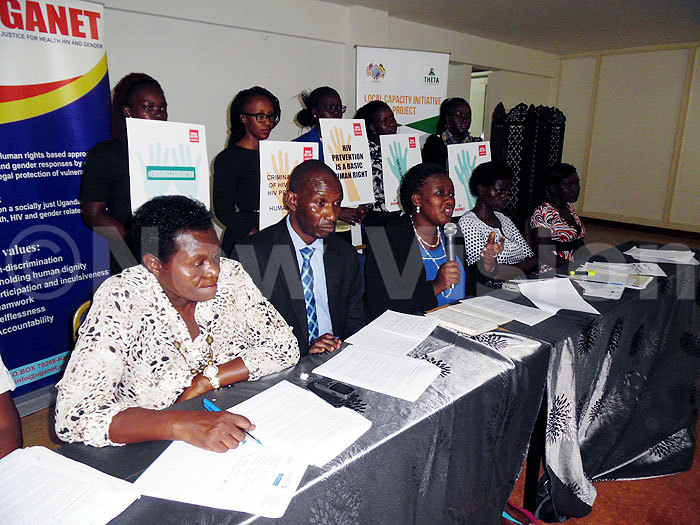 "The law has been counterproductive to all the achievements Uganda has made.”
TOP HIV: Towards zero STORY
Wed Nov 30 2016 .
Activists renew call for HIV law amendment

"The law has been counterproductive to all the achievements Uganda has made.”

PIC: Activists during at a press briefing in Kampala on their stand on the HIV Prevention and Control Act. (Credit: Noah Jagwe)

They argue that the law contains clauses that could deter all the benefits in the fight against the scourge.

According to this group, the law instead instills fear in communities about HIV disclosure and also fuels stigmatization.

Earlier this year, some 60 civil society organizations across the country challenged the criminalization of HIVin Uganda as well as other ‘harmful' provisions in the Act.

Dora Kichoncho Musinguzi, the executive director Uganda Network on Law and Ethics, said the salient features that are scanned out in the law which they consider discriminatory are: Clauses 21, 41 and 43 of the Act that seek to criminalize HIV, particularly intentional transmission.

The Act would require mandatory disclosure of one's HIV status, failure of which would be regarded as "criminal", and attempting to or, intentionally transmitting the virus.

Failure to use a condom where one knows their HIV status would constitute a criminal offence, making them liable for prosecution.

The provisions in the HIV Act, according to Kichonco, do not only stigmatize and discriminate against people living with HIV, but also deter communities from seeking HIV services such as HIV testing and subsequently HIV treatment.

"It is five months since we filed the petition. The government has not responded to our case. This is procedurally wrong and negates justice," she said.

Kichoncho said if the law continues "as we could see", it would heighten stigmatization of people living with HIV and that many of the targets such as 90% of people knowing their status,90% of those who with HIV are on treatment and 90% with suppressed  viral load set by the country might not be achieved.

"The law has been counterproductive to all the achievements Uganda has made."

She said the legal environment in Uganda is not conducive and human rights have not been respected. "Laws that criminalize and stigmatize people with HIV must be repealed."

Meanwhile, Dorothy Nassolo, communications officer of Forum of People Living with HIV/Aids Networks in Uganda said there is a crisis the country might not stand.

She said a number of patients have been hacked to death because they have been discovered by their spouses for taking ARVs covertly.

National Forum of People Living with HIV/AIDS officer Milly Katana said the most affected group by the law are women through gender-based violence at home.

Katana said it's better for Uganda to look at other alternatives for instance biomedical tools, medical male circumcision and condoms.