Home
NEWS
Media
Supplements
Tenders
Notices
The National Coffee Policy was formulated in 2013, but a law is yet to be drafted.

The National Coffee Policy was formulated in 2013, but a law is yet to be drafted.

Stakeholders in the coffee sub-sector have asked the Government to urgently enact a coffee law to punish malpractices in the coffee value chain and save the industry.

Frustrated stakeholders said the malpractices start right from the propagation through post-harvest handling and selling.

They said a punitive law would arrest the deteriorating coffee quality and boost yields and subsequently, earnings. Farmers, under their umbrella organisation, the National Union for Coffee Agribusiness and Farm Enterprises (Nucafe) blame the absence of such a law for the careless handling and resultant decline of coffee.

The National Coffee Policy was formulated in 2013, but a law is yet to be drafted.

According to Nucafe, the law should streamline production and marketing of coffee, provide standards for pre and post-harvest handling.

"People claim that coffee prices have been declining. The price of good quality coffee never falls as that is what everyone wants," Ssendaula said.

Despite the lowvolume, coffee exports are Uganda's biggest foreign-exchange earner after tourism and remittances from Ugandans living abroad. 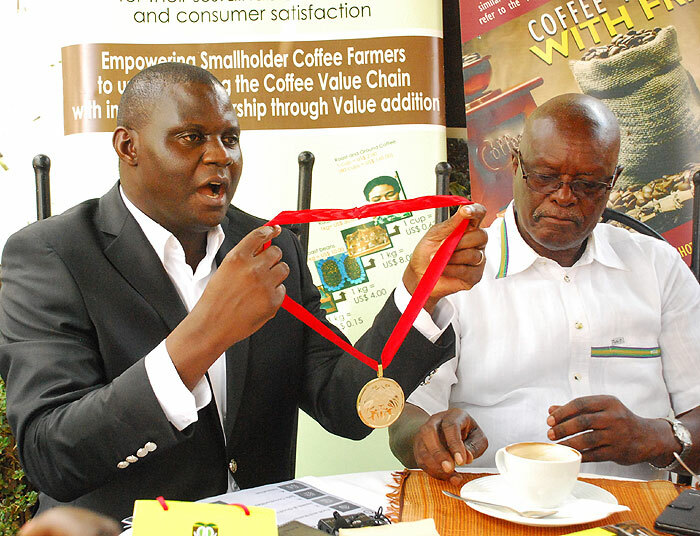 According to Nucafe, coffee can still earn Uganda all her needed foreign exchange and propel it to middle income status by 2020. They expect a rise in the global coffee demand from 140 million 60kg bags to between 150 million and 160 million by 2020, which presents a huge opportunity for Uganda.

The stakeholders' concerns were aired during an event to showcase the Premagyan global gold award for compassion and wisdom, which Nucafe won at the Good100 competition in Lausanne, Switzerland recently.

The competition, organised by Good Festival sought to recognise projects with sustainable business models that exemplify compassion and wisdom. It evaluated about 8,800 innovation projects.

Nucafe executive director Joseph Nkandu, who represented the organisation in Switzerland, noted that Nucafe uses an agribusiness model that helps improve farmers' incomes by encouraging them to own their coffee along the various stages of the value chain.

Farmers are trained to assume as many roles and responsibilities as possible in the coffee value chain in order to increase their incomes from the value added.