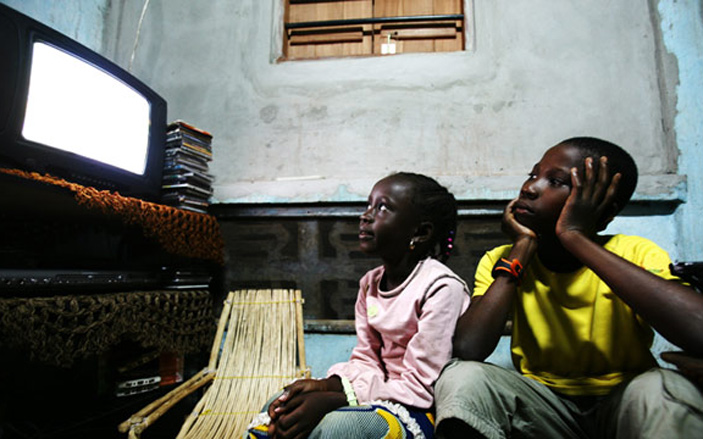 Many channels are going even deeper, with programmes targeting specific regions and ethnic groups in local languages.

Raised on the backstabbing intrigue of 1980s American soaps "Dallas" and "Dynasty", and later, the heady drama of South American telenovelas, Africans are enjoying a surge in local TV content they can finally identify with.

It took a while, but in the past decade local programming has soared in sub-Saharan Africa's key economies, a rise driven by both foreign satellite networks and television stations on the continent.

This growth has delivered up local shows such as Kenya's comedic "Real Househelps of Kawangware" -- a play on the US "Real Housewives" series -- along with talk shows, political satire and continent-wide reality TV such as "Big Brother Africa" and "Project Fame".

And demand is set to grow with the number of households owning a television expected to double to more than 150 million in the next 10 years, according to TV market research firm Dataxis.

"When you want to enter into people's lives, you need to speak their language. Emotion is stronger when you speak to them in their language and with content they can identify with," said Laouchez, who has launched eight channels on the continent.

The group has dedicated channels in Nigeria, in Swahili-speaking nations such as Kenya and Tanzania, and in Portuguese-language countries Angola and Mozambique, all with local programmes.

And because the channels are often available to subscribers in the same package, Nigerian music lovers can see what is happening on the Kenyan scene or elsewhere.

Many channels are going even deeper, with programmes targeting specific regions and ethnic groups in local languages.

In Kenya for example, Inooro TV, launched in October 2015, broadcasts only in Kikuyu, the most widely spoken language in the country.

According to Dataxis, Africa's audiovisual market is currently worth $6 billion dollars (5.3 billion euros) annually, and could reach $8.6 billion in the next five years.

One of the continent's frontrunners in all things big and small screen, Nigeria has a 70 percent local content quota, and has had homegrown series running since the 1970s.

"There were local dramas  ... akin with the telenovelas you have today where we have characters that are larger than life and Nigerians would look forward to going home to watch them at eight o'clock prime time," said Eugenia Abu, executive director of Nigeria's television authority.

"It kind of evolved from there, that this was possible, that stars could be made within Nigeria, that it didn't have to be an American superhero.

Abu said the booming "Nollywood" film industry was largely to thank for the surge in local content.

"There was a gap. The population is huge and that gap needed to be filled with entertainment of people that are easily recognisable, that are Nigerians," she told AFP.

However, in a sign of the challenges faced by broadcasters, local media has decried a resulting ratings disaster at the already beleaguered SABC, as high-income households spurn cheaply made local shows.

Still Nigeria and South Africa are exceptions. Smaller African countries have only in recent years seen a burst in homegrown television.

"It takes time, means and artists," to increase local content, said Amoordalingum Pather, director general of the national broadcaster MBC in Mauritius, which has 17 channels and hopes to move from 10 to 70 percent local content.

At the first edition of a new African TV industry summit which was held last month in Mauritius, boosting local content was one of the main topics.

For Bernard Azria, whose production and distribution company Cote Ouest has long been a leader in francophone sub-Saharan Africa, the real debate is getting African companies to share in the burgeoning market.

"There is a window of opportunity for African companies to take ownership of their audiovisual market" before foreign companies sweep in and dominate, he said.