Japan's Toshiba Corporation has signed a memorandum of understanding (MOU) with Uganda's Ministry of Energy and Mineral Development (MEMD) on a comprehensive partnership in geothermal power.

The agreement will see the parties collaborate in power generation projects, including personnel development, according to statement released Sunday by the energy ministry.

The parties signed the MOU during the Tokyo International Conference on African Development 2016 ("TICAD VI"), that ends today in Nairobi, Kenya.

Toshiba will collaborate in the development and supply of major equipment for a geothermal power plant, create operation and management guidelines, and cooperate in personnel development, the statement said.

"The development of Uganda's geothermal energy resources is in line with our energy policy objectives of increasing power generation capacity and diversifying our energy mix in order to achieve least cost, affordable and stable energy supply", said Dr. Fred Kabagambe-Kaliisa, Permanent Secretary at the Ministry of Energy and Mineral Development, at the signing ceremony.

"We are very confident that the Government of Uganda and Toshiba will create a strong Public-Private-Partnership to develop the Geothermal Energy resources."

Toyoaki Fujita, Business Development Executive of Toshiba's Energy Systems & Solutions Company said, "We hope to build a strong partnership with Uganda and to contribute to the development of sustainable power supply there. Toshiba's Energy Systems & Solutions Company is a world leader in geothermal power generation, and I believe that our established expertise can contribute to the geothermal power supply in Uganda." 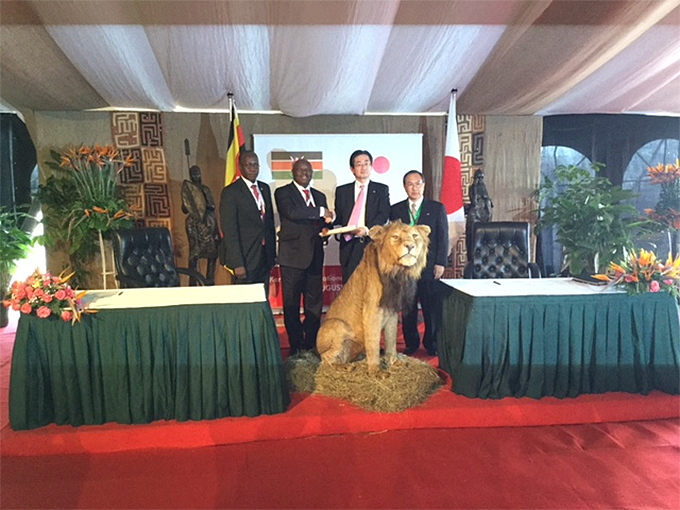 Uganda, lying west of the Great Rift Valley, has rich geothermal potential, equivalent to 500 megawatts.  Currently, about 60% of power generation capacity is from hydroelectric power, and the country has long promoted construction of hydro power plants.

Adding geothermal to the mix will contribute to supply stability and the ability to meet rising demand stimulated by high economic growth-currently increasing at about 10% per a year, the statement added.

Toshiba has delivered 53 geothermal turbines, with a total capacity of 3,400 megawatts, to plants in Japan, the USA, the Philippines, Iceland and other countries around the world. This represents approximately 23%*, of the world's installed geothermal capacity, making Toshiba the world's top supplier.

In the African market, Toshiba most recently delivered four geothermal turbines to Kenya that started commercial operation in 2015. The company has also concluded MOUs with geothermal power development companies in Ethiopia in 2014, Tanzania in 2015 and Djibouti in August this year, all covering comprehensive collaboration in the geothermal power generation business.

Toshiba Group will continue to contribute to stable electricity supply and the realization of a low-carbon economy.