Home
NEWS
Media
Supplements
Tenders
Notices
"Francis has been dragged through the mud because of his position on refugees."

"Francis has been dragged through the mud because of his position on refugees."

A portrait of Pope Francis hanging in Warsaw's St. Saviour Church is flanked by another, much larger one, showing the smiling late Polish-born pontiff and saint, John Paul II.

In Poland, Karol Wojtyla is still "The Pope".

Experts say Francis will have a hard time winning over hearts and minds in the devout central European country as he arrives Wednesday for his first visit, part of the week-long World Youth Day faith extravaganza.

While Poland shunned refugees over alleged security risks amid Europe's worst migration crisis since World War II, Francis encouraged open doors and charity for those fleeing conflict -- regardless of their faith.

Howls of criticism -- and even hate speech -- went up in ethnically homogenous, conservative Poland when the Catholic faithful saw Francis washing the feet of three Muslim asylum seekers during Easter celebrations in Italy.

The deeply Christian gesture, modelled on Jesus washing the feet of his disciples, triggered an unprecedented level of online vitriol against a pontiff, says Ignacy Dudkiewicz, an editor for the Kontakt magazine, focused on progressive young Catholics in Warsaw.

"Francis has been dragged through the mud because of his position on refugees," he told AFP.

Young people and a nun from France celebrate at the market square in Krakow, Poland. (AFP)

But critics said the move was more a gesture than a real attempt to ease the plight of refugees.

According to Zbigniew Nosowski, editor of the respected Catholic monthly Wiez, "many here think the pontiff's message of mercy and compassion for refugees and the poor is exaggerated".

Arch-conservative Catholic journalists have gone so far as to question the legitimacy of his election, even accusing Francis of wanting to destroy the Church. Senior Polish clerics have stopped short of condemning such views.

"What nerve to require each parish to host an Arab refugee, while also saying that Catholics should not procreate like rabbits."

Polish bishops do not appear to be great Francis fans: in a letter addressed to the faithful for World Youth Day, they mentioned John Paul II three times, without so much as a murmur about Francis.

"Bishops here formally support the pontiff's message of hosting refugees, but they do so without much conviction," notes Dudkiewicz. 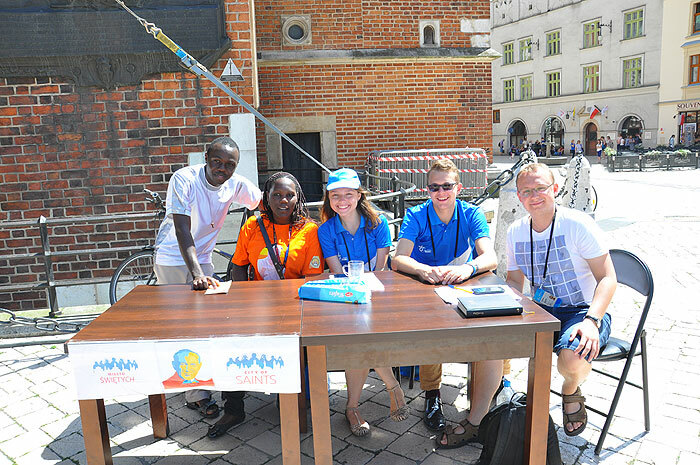 New Vision's Juliet Lukwago (2nd-left) is among the over 100 Ugandans representing Uganda at the World Youth Day in Poland. (Credit: Juliet Lukwago)

Accustomed to a high degree of priviledge and prestige, "the Polish Church is afraid of losing its position, both institutional and financial, he added.

"It isn't inclined to follow Francis's return to a 'Church of the poor', as was the case during the first centuries of Christianity, without purple robes and limousines, without luxury apartments," says Pawel Boryszewski, a sociologist of religion.

"The Polish hierarchy is very worried. A bishop on a bike and in sandals, this doesn't go down well here.

"A bishop in Poland -- he's a god," he adds. "It's no wonder the Polish Church prefers to keep quiet and wait until this pontificate is over."

Francis's progressive views on contraception -- which he dubbed "not an absolute evil" -- and allowing divorcees to receive communion have also long sparked mixed feelings among conservative faithful here.

Francis's July 27 to 31 trip to the European Union and NATO member of 38 million people will be quite different from the nine historic pilgrimages John Paul II made to his homeland during his 27-year pontificate.

While the late Polish pontiff focused his energies on providing spiritual guidance to his countrymen as they peacefully overthrew communism, Francis has a more universal mission as he meets young Catholics from around the globe.

Nosowski believes that despite the deep reservations of some, Poland "is getting fired up for Francis's visit, especially young Poles."