Home
NEWS
MEDIA
Supplements
Tenders
Notices
"We're here because of the urgency of the undone work, because we are still counting annual deaths from AIDS in the millions."

"We're here because of the urgency of the undone work, because we are still counting annual deaths from AIDS in the millions."

PIC: An activist demonstrates and holds a placard asking for AIDS treatment for all during the plenary session of the 21st International Aids Conference in Durban on Monday. (AFP)

More than 18,000 scientists, campaigners and donors opened a major AIDS conference in South Africa on Monday, issuing stark warnings that recent gains in the fight against the disease were under threat.

The five-day International AIDS Conference returns to Africa 16 years after Nelson Mandela galvanised the world to take up the fight against AIDS, describing it as "one of the greatest threats humankind has faced".

Again hosted by the coastal city of Durban, the conference is seen as the key gathering of experts tackling a pandemic that has claimed more than 30 million lives in 35 years.

In a joyful opening ceremony that celebrated the work of researchers and scientists and included a video message of support from Nobel laureate Desmond Tutu, International AIDS Society president Chris Beyrer warned that it was too soon to declare victory over HIV.

"Today our movement is threatened by complacency, by declining funding and by the continued refusal of too many governments to address the humnan rights and social justice issues that drive HIV in marginalised communties," he said.

"We're here because of the urgency of the undone work, because we are still counting annual deaths from AIDS in the millions." 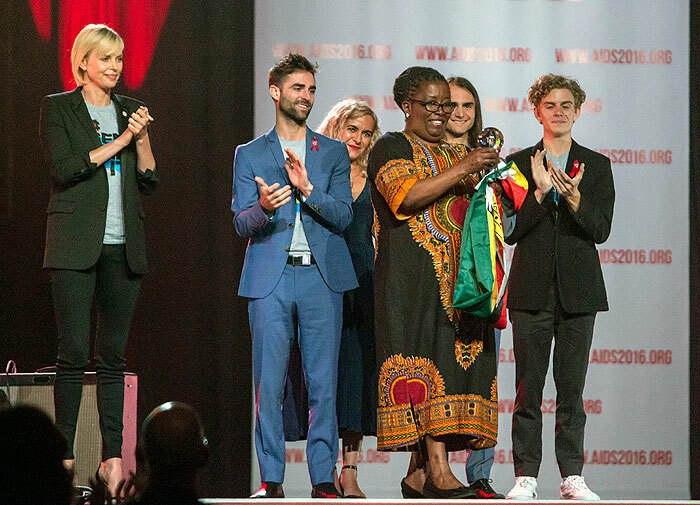 Antiretroviral drugs have allowed many sufferers to survive, but there are some 36.7 million people worldwide living with HIV/AIDS, mainly in sub-Saharan Africa.

Of these, only 17 million are receiving treatment.

"We have dispelled the darkness of the past, but we cannot yet stand tall in triumph because there's a serious downside to this story," said conference co-chair Olive Shisana.

With no cure for the virus in sight, patients today still face lifelong reliance on the expensive antiretroviral drugs which cause side effects.

Delegates will discuss the latest scientific research amid frustration that there is still no vaccine for the stealthy virus.

"You have made incredible progress in the HIV battle in just one generation -- you will succeed," Tutu said in a video message to the gathered delegates.

In a rousing speech that elicited roars of applause from the crowd, Charlize Theron decried the social inequalities driving the epidemic.

"AIDS does not discriminate on its own," said the actress, who founded an AIDS charity working with teenagers in South Africa, her home country.

"It has no biological preference for black bodies, women's bodies, gay bodies, the youth or the poor."

Before 2000, only wealthier countries had hosted the AIDS meeting.

That changed when South Africa became the first developing country -- and the first with an epidemic of HIV in its population -- to take the helm. 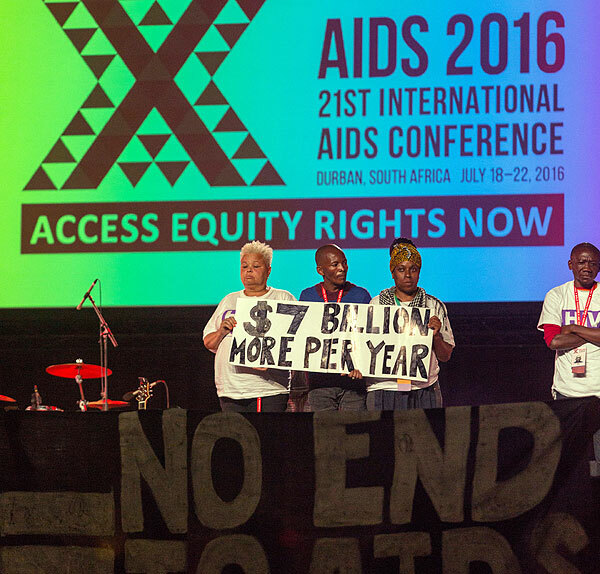 The conference was a contentious affair, but its emotional impact transformed the AIDS campaign.

And South African activists angrily criticised then-president Thabo Mbeki, who insisted the disease was caused by poverty, not by the human immunodeficiency virus (HIV).

Mbeki denied millions access to antiretroviral drugs, and a Harvard study later concluded his policies were responsible for 300,000 avoidable deaths in South Africa.

"It was a very painful moment in the world," Beyrer told AFP, recalling the 2000 event.

The approach changed under subsequent leaders, and South Africa now has the world's largest treatment programme.

"When the global AIDS community last met (in Durban) in 2000, only a few thousand Africans were receiving antiretroviral drugs," billionaire philanthropist Bill Gates said in a speech on the eve of the meeting.

"Today, more than 12 million Africans are on treatment -- more than a quarter of them living here in South Africa."

But other statistics are less encouraging.

In sub-Saharan Africa, more than 2,000 young people under the age of 24 are newly infected every single day, and almost half of the people living with HIV are undiagnosed.

"If we fail to act, all the hard-earned gains made in HIV in sub-Saharan Africa over the last 15 years could be reversed," Gates warned.