Home
NEWS
MEDIA
Supplements
Tenders
Notices
The five year project was initiated in 2013 by the Norwegian government to support the e-learning programs up to 2017.

The five year project was initiated in 2013 by the Norwegian government to support the e-learning programs up to 2017.

The Norwegian embassy has injected sh10bn in an e-learning project at Makerere University.

Part of the funds was used in the renovation of a block at the university and the other funds will be used in the teaching of students and procuring of teaching materials.

About 100 computers have already been procured by the university.

During the handover of the building at Makerere University last week, 20 trainers were awarded certificates after having trained for one year on conducting e-learning.

The five year project was initiated in 2013 by the Norwegian government to support the e-learning programs up to 2017.

The e-learning teaching in Makerere, started as a department in the year 1991. Today, with a population of 40,000 students of which 10% are directly on e-learning courses, the university has made it an institute.

The dean of the e-learning institute at Makerere, Paul Muyinda says that the project is meant to increase capacity to integrate information technologies.

Muyinda says that the building that was refurbished is historical. It at one time, served as a dormitory of many African Presidents like President Julius Nyerere, Joseph Kabila of Democratic Republic of Congo, President Daniel Arap Moi of Kenya and many others.

The Consular in charge of trade and energy, Peter Christophersen on behalf of the Norwegian embassy said that his government is committed to supporting education in Uganda. The Norwegian embassy consular in charge of trade and energy, Peter Christophersen, launches the e- learning institute. He is flanked by deputy vice chancellor Okello Ogwang (R) and the dean Paul Muyinda at Makerere University.

He further promised that their country will continue supporting the centre.

Christophersen urged the trainers to come up with more simplified programs that will attract people to join e-learning for the development of the country.

Another trained staff, Rose Atugonza says e-learning will make her work easily," Because after you have been well-trained, you can design other courses for the learners much better." 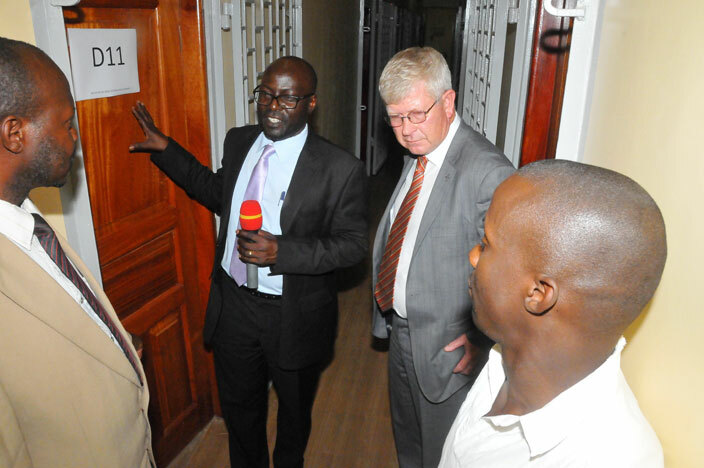