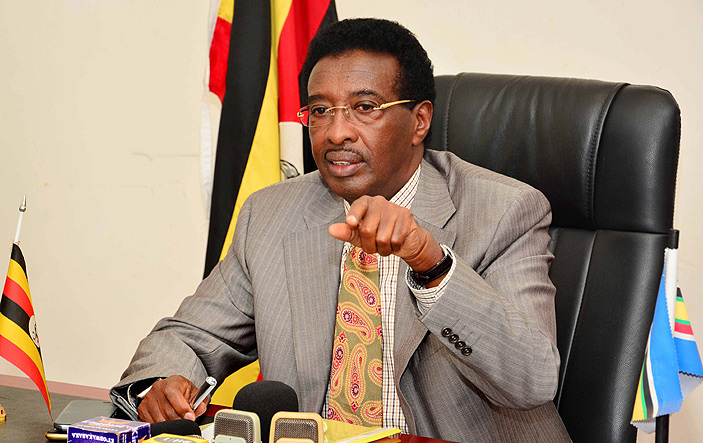 At a few minutes to midday, information minister Jim Muhwezi, Attorney General Fred Ruhindi and Police chief, Gen. Kale Kayihura entered a boardroom in the Office of the Prime Minister in tow with media managers for what the retired senior army officer (Muhwezi) called an extra ordinary news conference.

After brief introductions, Muhwezi who called for the news conference said cabinet that sat at State House, Entebbe on Wednesday, made a number of decisions worth bringing to the attention of the public, but he restricted himself to only one decision - the ban on the live coverage of defiance campaign.

The Forum for Democratic Change (FDC) and its presidential candidate Kizza Besigye who claim to have won the February 18 ballot planned to stage demonstrations today in protest against the scheduled swearing in of incumbent president Yoweri Museveni on May 12.

However, the April 29 Constitutional Court interim order barred FDC, Besigye and their sympathizers from engaging in any defiance activities until the main constitutional application lodged by the Attorney General is determined.

The Attorney General is seeking constitutional interpretation of the legality of defiance campaign and constitutional basis of FDC's call for an independent presidential election results audit.

The Electoral Commission declared Museveni as a duly elected president on February 20 and the Supreme Court upheld the declaration and dismissed a petition seeking to overturn his victory on March 31.

Reading from a prepared short statement, Muhwezi said cabinet directed that all live coverage of the defiance campaign activities in the electronic media should stop forthwith and that defiant media houses run the risk of having their broadcasting licenses revoked.

The minister also announced that cabinet also directed the police to ensure that the Constitutional Court interim order barring FDC and Besigye as well as their sympathizers from engaging in defiance activities, is strictly adhered to.

Looking in to the TV cameras before him, Muhwezi said if the media houses get punished for violating the ban, they will have themselves to blame.

"Do not say I didn't warn you. It is your responsibility to keep Uganda safe. We have a duty to ensure security, stability and order," he added.