Home
NEWS
Media
Supplements
Tenders
Notices
There were chaotic scenes at the airport as passengers fled in panic, with a thick plume of smoke rising from the main terminal building

There were chaotic scenes at the airport as passengers fled in panic, with a thick plume of smoke rising from the main terminal building

A series of apparently coordinated explosions ripped through Brussels airport and a metro train on Tuesday, killing at least 26 people in the latest attacks to target Europe.

Security was tightened across the jittery continent and transport links paralysed after the bombings that Belgian Prime Minister Charles Michel branded "blind, violent and cowardly".

"This is a day of tragedy, a black day," Michel said on national television.

Foreign Minister Didier Reynders warned that authorities fear suspects are still at large in the city that is home to NATO and the European Union.

The bloodshed came just four days after the dramatic arrest in Brussels on Friday of Salah Abdeslam -- the prime suspect in the Paris terror attacks claimed by the Islamic State group -- after four months on the run.

Belgian authorities had been on alert after Abdeslam, Europe's most wanted man, told investigators he had been planning an attack on Brussels. 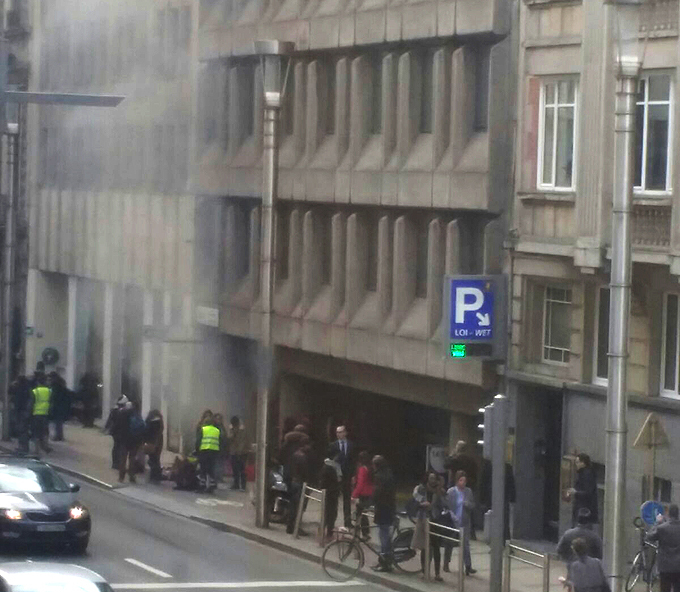 Smoke rising from the Maalbeek underground, in Brussels, following a blast at the station close to the capital's European quarter. AFP Photo

Witnesses told Belga news agency there had been shots and shouts in Arabic at the airport before the blasts hit at the airport on the northwest outskirts of Brussels.

"There have been two explosions at the airport. Building is being evacuated. Don't come to the airport area," the airport said on Twitter, as police cars and rescue vehicles rushed to the scene.

"All airport operations have been suspended until further notice," it said.

Interior Minister Jan Jambon announced that Belgium's terror threat had been raised from three to a maximum of four.

Airports in neighbouring France, Germany and the Netherlands as well as Britain swiftly boosted security in response.

The blasts triggered a transport shutdown in Brussels, with all flights halted in and out of the airport and the city's metro, tram and bus services suspended.

European Union staff in Brussels, where the 28-nation bloc has its headquarters, were told to stay indoors or at home.

Sweden's Prime Minister Stefan Lofven branded the blasts an "attack against democratic Europe", while British premier David Cameron tweeted: "I am shocked and concerned by the events in Brussels. We will do everything we can to help."

Blood in the elevator

"We heard the explosion and felt the blowback," Jean-Pierre Lebeau, a French passenger who had just arrived from Geneva, told AFP, adding that he had seen wounded people and "blood in the elevator".

"First we were kept together by the border police, then they gave us the order to evacuate," Lebeau said.

The ceilings collapsed, he said, describing a smell of gunpowder at the scene.

With shock on their faces, Jean-Pierre Herman embraced his wife Tankrat Paui Tran, who he had just gone to collect from the airport after her flight from Thailand.

"My wife just arrived," Herman said. "I said hello, we took the elevator and in the elevator we heard the first bomb. Passengers are gathered near Brussels airport in Zaventem, following its evacuation after at least 13 people were killed and 35 injured as twin blasts rocked the main terminal of Brussels airport. AFP Photo

"The second exploded just when we got off. We ran away to an emergency exit. I think we are very lucky."

An AFP correspondent on their way to the airport said roads to the terminal had been blocked and trains halted.

Charlotte McDonald-Gibson, a British journalist living in Brussels, told AFP there had been "total confusion" at the airport, where she was having breakfast.

"Suddenly staff rushed in and said we have to leave," she said.

"They rushed out and into the main terminal A departures building. Nobody knew what was going on.

"It was total confusion, people were just standing around wondering what was happening."

There was no immediate confirmation of the cause of the blasts.