Home
NEWS
Media
Supplements
Tenders
Notices
During the debate, Labeja and Otim drew the loudest cheers from the massive crowd – an illustration of their popularity among the Gulu town locals.

During the debate, Labeja and Otim drew the loudest cheers from the massive crowd – an illustration of their popularity among the Gulu town locals.

A joint public debate involving candidates contesting for Gulu Municipality Mayor left a lasting impression on the large it attracted on Sunday.

The three-hour debate took place at Gulu main market and had eight of the nine candidates take part.

It was chaired by Okweda Ogal Jal, a senior lecturer at National Teachers’ College, Unyama. Candidates started by responding to pre-set questions, and later were given the chance to ask another challenger of choice one question.

The election for mayor will take place on Wednesday (March 2).

During the debate, Labeja and Otim drew the loudest cheers from the massive crowd – an illustration of their popularity among the Gulu town locals. Earlier, Bernard Loum, the program manager of ACORD, spoke on behalf of the debate organizers and gave his opening remarks.

He said the debate was intended to provide a flat forum for both the candidates and the electorate to examine the leadership competence of the people who can truly represent the people.

It was meant to level the ground so as to prevent the kind of propaganda that candidates level against their opponents during individual campaign rallies.

And most importantly, Loum added, the debate was staged to help prevent election-related violence by harmonizing the pre-election mood, especially among the supporters.

In his closing remarks, Acholi district khadi, Sheikh Musa Khelil (pictured below), called on voters to turn up in big numbers to elect their new leader.

He called on candidate that will be elected the new mayor – and winners of other elective posts like LC3 chairperson and councilors – to ensure that they put the interests of the electorate as priority.

“The biggest challenges of Gulu Municipality as it strives for a city status are poor hygiene and sanitation, drainage line system, health care services, high taxation to the business community, poor road networks and corruption of both elected leaders and technical staff,” said Sheikh Khelil (pictured below).

“We need a healthy environment and productive society.” 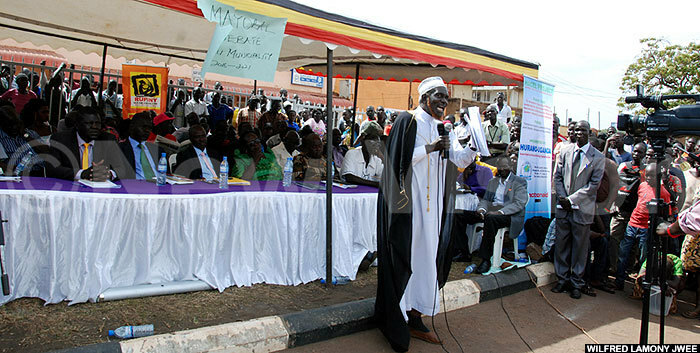 Odong Geoffrey Ojibo, the executive director of HURAMO-Uganda, said that in every election, there is always a winner and a loser and that losing does not mean the end of life. Life, he added, continues for those with a vision for future leadership.

He said a similar debate will be held even for the LC3 chairpersons candidates from all the seven district of Acholi sub-region to enable voters examine their candidates and make more informed decisions on who to elect.


What the voters said

Fred Kilama from Laroo Division applauded the organizers of the debate, saying it has enabled them to physically know all the candidates for the mayoral seat and to hear directly from them.

Susan Apiyo from Layibi Division felt the debate enable her to know which competent candidate to vote for come Wednesday. She said some candidates failed to express their points before electorate and panel, a sign that they are not worthy leaders.

Doreen Akello, who comes from Bardege Division, urged the organizers of the debate to also organize a debate for LC3 chairpersons, saying similar debates should also have been staged for the earlier parliamentary and LC5 elections.

Patrick Ocira from Pece Division was pleased with the “eloquent and mature way” the DP’s Otim, FDC’s Aliker, Independent candidate Adongakulu and incumbent Labeja presented their manifestos and responded to questions the debate moderator and their opponents posted to them.

And Stella Lalam, a widow from Pece Division, said she will only vote for the candidate with a good manifesto of improving education by supporting education of vulnerable orphaned children, health, security, road network and support for the business community.