Women in Bulambuli have pledged to use their bedrooms to convince their husbands to vote for President Yoweri Museveni and Irene Muloni.

"We pledge to do what it takes to use our bedrooms to convince our husbands to vote for President Museveni, Muloni and other NRM candidates," Veronica Namasaba said.

She said that a number of their husbands had been convinced by the opposition during the visit of FDC's Kizza Besigye, adding that they have been trying to lure them too to vote in their favour.

"We can never forsake President Museveni and his cadres because it's under NRM that women have got rights and now can talk and handle high positions in government," Namasaba said. 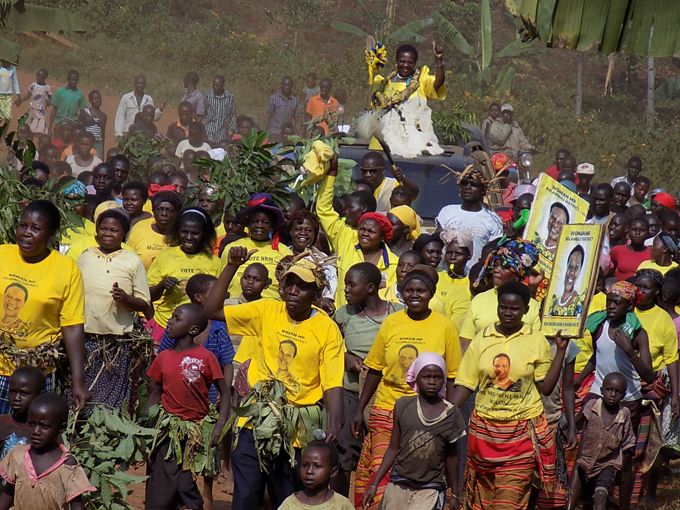 She said when they talk of using their bedrooms does not mean they will deny their husbands their conjugal rights but to let them know that NRM is party for all people.

This call was made by the minister for energy Irene Muloni while canvasing for votes in her constituency.

"Married women should use the bedroom to convince your husbands to vote for President Museveni and Irene Muloni. Please sweet talk them and let them know how NRM has transformed Uganda," Muloni said.

"You should also vote for me because I am fully married and since I started my campaigns I have been moving with my fire that warms. It's now 35 years my fire has been warming me," Muloni said inviting laughter from crowd.

She said that family is the unit where people should learn leadership and advised her opponent Sarah Wekomba to first get married, make family then assume leadership.

"Using my experience of 35 years in marriage I am ready to offer her free skills and guidance on how to first make a family then after I can give her chance to serve people of Bulambuli in parliament," Muloni said.

Muloni's statement comes in response to allegations that Sarah Wekomba who is an independent has been using abusive language against Muloni while campaigning in different rallies.

Muloni appealed to residents in Bulambuli to vote for her depending on experience, performance, adding that parliament is not for children.

"It's not easy to catch the Speaker's eye or the president while in parliament. My advice is that my daughter should first do what is required in African tradition. In Bugisu, boys who are not circumcised do not share Malwa pot with elders" Muloni said.

Muloni said that use of abusive language is a sign that she is still young and not ready to represent people of Bulambuli in parliament.