Home
NEWS
MEDIA
Supplements
Tenders
Notices
“I am a peace maker; I am a peacekeeper. That is what policing and military is all about. We will make the peace and keep the peace. I am committed to ensuring that this country enjoys total peace,” Kayihura said

The Inspector General of Police General Kale Kayihura on Saturday afternoon appended his signature to #IChoosePeaceUG as one its peace ambassadors.

Kayihura assured the country of his commitment to total peace before and after elections.

#IChoosePeaceUG is an all-inclusive youth-led social action campaign to promote love, brotherhood and solidarity before and after the 2016 elections.

"I am a peace maker; I am a peacekeeper. That is what policing and military is all about. We will make the peace and keep the peace. I am committed to ensuring that this country enjoys total peace," Kayihura said as he signed a peace document. 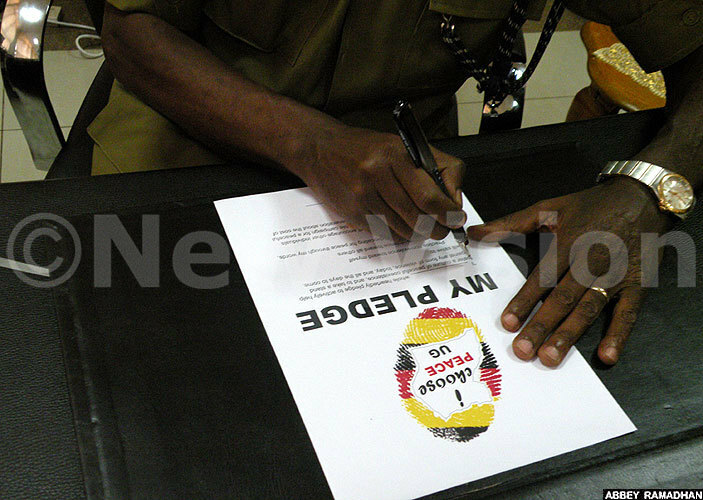 In the peace document Kayihura signed, the police boss, "whole heartedly pledged to actively help foster a culture of peaceful co-existence and to take a stand against any form of violence today, and all the days to come."

Kayihura also pledged to engage in advocating for peace through his words as well as actions.

To support the commitment for #IChoosePeaceUG, Kayihura promised to encourage other individuals and other organizations to join the campaign for a peaceful Uganda and educate the younger generation about the cost of violence.

Speaking at the same function at the Police headquarters, Desire Karakire, a founder member for #IChoosePeaceUG said they started the peace campaign two months ago especially after following a narrative of reported cases of elections violence.

"We are getting a lot of support especially from the Uganda Police, New Vision, the Army, religious organizations, business community, the local and expatriate community among others," she said.

Karakire also said that through #IChoosePeaceUG they aimed to magnify all efforts to dismantle tribalism, sexism and all other forms of oppression ahead of the polls. 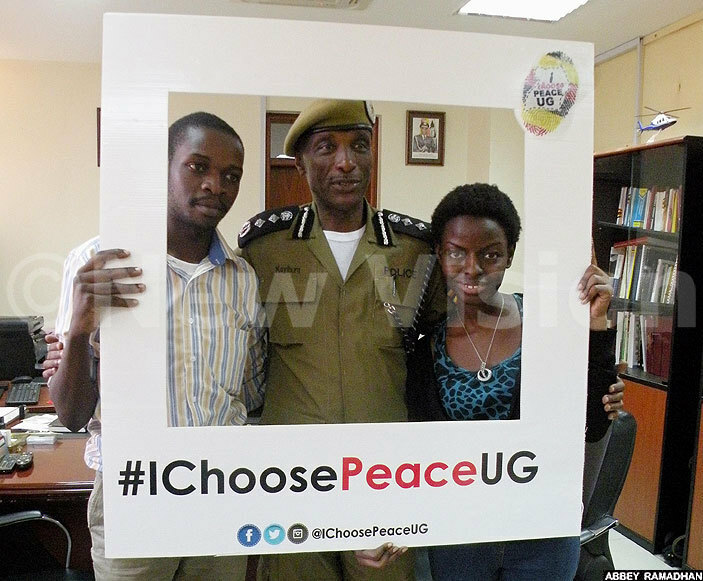 From left, David Ndyabhika, Gen. Kayihura and Desire Karakire pose for a photo after signing the peace deal

Karakire said that a number of people were interested in the peace message.

"This message is to you as an individual because it's you who takes the decision. It's so important especially for the youths because they are the ones who are paid money to go to the streets and cause violence," she said.

Karakire said as youths, they were interested in seeing a peaceful electioneering process and that they were tired of the narrative that African elections were usually violent.

He said that they had decided to look out for key personalities in the 2016 elections to endorse #IChoosePeaceUG so that they could be held accountable.

She said the group was all inclusive and they did not support any single political individual.