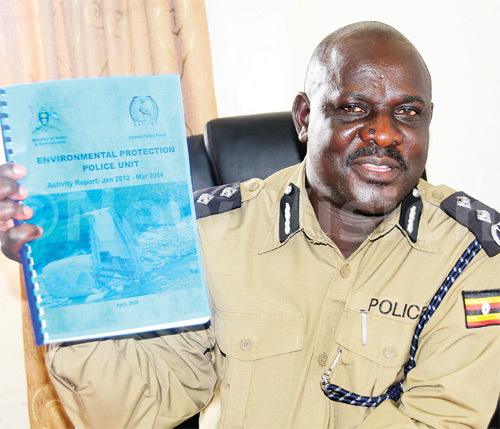 SAVE LAKE VICTORIA: Throwing his hands in the air as he speaks, he pays attention to every question and statement I make, as he occasionally checks for evidence from a heap of documents. Godfrey Taire Idhwege exudes confidence, an air of an experienced Police officer and of a passionate environment
TOP Towns STORY
Tue May 13 2014 .
Environmental police too broke to enforce laws

SAVE LAKE VICTORIA: Throwing his hands in the air as he speaks, he pays attention to every question and statement I make, as he occasionally checks for evidence from a heap of documents. Godfrey Taire Idhwege exudes confidence, an air of an experienced Police officer and of a passionate environment

Throwing his hands in the air as he speaks, he pays attention to every question and statement I make, as he occasionally checks for evidence from a heap of documents. Godfrey Taire Idhwege exudes confidence, an air of an experienced Police officer and of a passionate environmentalist.

“If the Government sticks to the path it has taken to cancel all land titles in wetlands, we shall enforce the law,” says Idhwege.

“Everybody will be called to order. The good thing, the permanent secretary and my line ministers are passionate about our work,” the commandant of the Environment Protection Police Unit (EPPU) states with confidence.

He appears determined to save not only Lake Victoria, but the wetlands and forest reserves in its catchment area and across the country.

Unfortunately, behind this determination is a host of challenges bedevilling the unit, including inadequate funding. “At the moment, we don’t have direct funding, so we are unable to conduct continuous patrols and surveillance in sensitive ecosystems. Sometimes we are seen as the face of environmental enforcement, but we do not control any money,” laments Idhwege.

The EPPU was launched in December 2011 to support the Ministry of Water and Environment in enforcing environmental laws and regulations.
But it is thin on the ground, with only 150 officers divided among the ministry headquarters, National Environment Management Authority (NEMA), various National Forestry Authority (NFA) offices and major central forest reserves across the country. Recently, its mandate was also extended to the National Water and Sewerage Corporation (NWSC) to arrest water consumers who bypass meters.

Without direct funding, the unit cannot conduct independent operations. Their salaries are paid by the Police Force, but they have to wait for the different environment authorities, like NEMA, to direct their operations and simply go along to enforce. This is exposing Lake Victoria and its catchment to illegal sand miners, loggers and wetland reclamation.

But even in such circumstances, the unit has posted significant achievements in its two years of existence.

A report submitted to the Inspector General of Police, Gen. Kale Kayihura, last week, showed the unit had impounded 174,818 pieces of illegal timber sizes and over 230 vehicles used in various activities degrading the environment. The vehicles include trucks carrying illegal timber and those caught dumping murram in wetlands. A total of sh15.2m was collected in fines from nine trucks in 2012.

According to the report, the EPPU has also recorded 1,127 environment-related cases, arrested over 1,000 suspects and confiscated 1,065 tools used by degraders. The tools include music equipment confiscated during operations against noise pollution, power saws used for illegal logging and others used in wetland reclamation. Some of the music equipment included mixers, loud speakers, pianos and drum sets, among others, some of which are still under EPPU’s custody pending the court process.

According to Paul Mafabi, the director for wetlands management in the Ministry of Water and Environment, had it not been for EPPU, there would not be any wetlands left in Kampala.

“The environment Police has been very helpful,” says Mafabi. “It has helped to check the level of degradation; you would not be seeing any green vegetation in Kampala. The Cabinet decision to cancel all titles in wetlands was also a result of their work because they would evict encroachers, only to find them with land titles. Now this has been addressed.”

However, of the 1,000 suspects arrested, the Police unit has only secured about 300 convictions between January 2012 and March 2014, while some cases are still under inquiry. The report attributes the delayed investigations and poor case disposal to inadequate funds for investigations.

“There is inadequate funding to undertake patrols and surveillance. This problem has also made it difficult for us to investigate SAVE LAKE VICTORIA vital information that the public regularly provides to us,” reads the report.

The 150 officers attached to the unit are not enough to investigate all the cases thoroughly. “I cannot increase the number of staff now.

I cannot have a force that won’t be facilitated; they will become harmful when we take them out into the field,” Idhwege said in an interview.

This is not the first time EPPU complains about under-funding. The issue first came up in a report covering April 1 to June 31, 2012, which said lack of fuel and a truck to ferry the impounded forest products had been a setback in many areas. The report pointed out that if the situation did not change, it may affect their operations; yet patrols need to be extended to cover more districts within the range where there is destruction of forests.

Police expects operations of its staff attached to Government departments to be borne by those units.

“The problem is that when we send our staff to those ministries, they often look at them as outsiders. People should know that we all work for Uganda and policemen are patriots,” observed a senior officer, on condition of anonymity.

Mafabi admitted that the environment Police was ill-funded, blaming it on the country’s small resource envelope. He said the unit would require at least sh1.5b a year to operate effectively but received less than a third of that. Although the ministry currently earmarks sh500m for the Police unit’s work, a source said it is not given as a vote to be accounted for by the EPPU.

“It is only released when the ministry decides that the Police should conduct an operation. This has led to bureaucracy in accessing funds for EPPU work,” says the report.

The report lists other challenges affecting the unit as political and armed men’s interference, lack of technical equipment like noise meters and unclear demarcation of protected ecosystems. It also cites corruption, which has bred the leaking of operational plans by insiders to perpetrators of environmental degradation. “Accommodation is also inadequate, forcing EPPU officers to sleep under trees like wild animals, especially during field operations,” says the report.

But according to Idhwege, the unclear legal framework remains the outstanding challenge to fighting environmental degradation. He says it breeds conflicts between the city authority (KCCA), land boards, NEMA and the wetlands department in the ministry. “Land boards have been issuing titles in wetlands and then developers go ahead to get permits from NEMA.

But when developers go to the wetlands department, the department says no,” he explained. “We follow the law. We cannot evict anyone from a wetland yet he has clearance from NEMA. Cancelling these permits has always caused delays and protracted court battles.”

However, with the recent Cabinet decision to cancel titles in wetlands, Idhwege envisions a better future.

The environment Police has been very helpful. It has helped to check the level of degradation; you would not be seeing any green vegetation in Kampala

Districts to get sh6b to save Lake Victoria

Cleaner manufacturing techniques to save L.Victoria

Do you have any views on how to save Lake Victoria? Do you know of any harmful human practices affecting the lake?
Write to the Features Editor, P.O Box 9815, Kampala, or email: features@newvision.co.ug or call 0312337000 or you can catch us on facebook @ www.facebook.com/SaveLakeVictoriaCampaign, Twitter @LKVictoria and http://www.newvision.co.ug/section/53-471-save-lake-victoria.htm