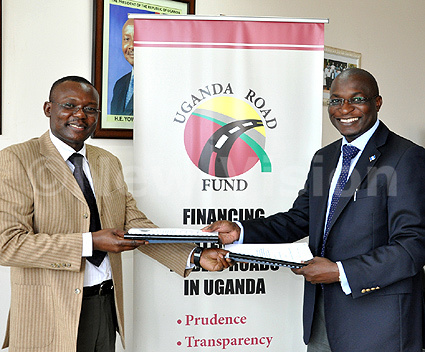 The Government has signed a sh540m contract with Pricewaterhouse Coopers (PwC)to develop a framework to fast-track the generation of Road User Charges.

The Government has signed a sh540m contract with Pricewaterhouse Coopers (PwC), a renowned accountancy and consultancy firm, to develop a framework to fast-track the generation of Road User Charges (RUCs).

Under the four-month deal, the framework will guide legal reforms necessary for the repealing of Section 14 of the Uganda Revenue Authority (URA Act) to allow the transfer of revenues accruing from RUCs directly to the Uganda Road Fund (URF) accounts.

Speaking during the contract signing ceremony at the URF head offices in Nakasero, Kampala, Eng. Dr. Michael Odongo, URF executive director noted that this was a step forward in the quest to create a fully-fledged second generational (2G) Fund.

“The framework is needed now, more than ever before, because it will develop legal reforms necessary for the implementation of URF as a 2G Fund. It (framework) will operationalize the decisions of cabinet on repealing Section 14 of the URA Act,” he said.

In establishing URF, Uganda followed in the foot-steps of 30 other African states, including Kenya, Namibia, Tanzania, Rwanda and Zambia.

However, since creating URF through an Act of Parliament in 2008 and its subsequent operationalization in January 2010, the Fund has, so far, failed to operate as a 2G Fund that generates revenues through RUCs like fuel levy, transit fees, road licences, tolls and axle load fines and disburse it to designated agencies because the URA Act precludes deposit of revenues to any account other than the consolidated account.

As a result, URF continues operating as a department in the finance ministry that receives annual budgetary funding from the treasury contrary to the URF Act, Odongo noted.

“The URF Act envisaged a 2G Fund, but we are implementing it with a framework of a first generation (1G). 2G works on a fee-for-service principle that road users pay for access and use of roads whose maintenance is funded directly from road users through road usage charging instruments,” he said.

Currently, URA levies excise duty of sh850 per litre of petrol and sh530 for a litre of diesel off fuel tankers from Kenya distribution depots to Ugandan retail outlets.

“In our terms of reference to the ministry of finance, we want sh200 per litre of petrol and sh100 from a litre of diesel from the excise duty levied by URA,” Odongo said.

Uthman Mayanja, a partner at PwC who signed the contract on behalf of the firm, noted that the accountancy and consultancy firm had assembled a team with credentials to deliver the framework in the agreed time and budgetary allocation.

“It is a complex and wide-ranging assignment but we will do anything in our powers to produce output aligned to Uganda’s overall development objectives that reconcile all road user fund frameworks and stakeholders by the end of July 2014,” he said.