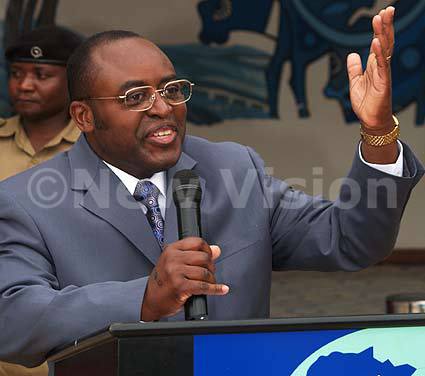 The Rwenzururu kingdom refutes claims that it is plotting to carve its own state out of western Uganda and eastern DRC.
TOP National STORY
Fri Jan 03 2014 .
We are not planning our own state - Rwenzururu king

The Rwenzururu kingdom refutes claims that it is plotting to carve its own state out of western Uganda and eastern DRC.

The Rwenzururu kingdom has refuted claims that it is plotting to carve its own state out of western Uganda and eastern Democratic Republic of the Congo (DRC).

Addresing a congregation at the Catholic Cathedral in Kasese Municilality on Wednesday, the Rwenzururu King, Omusinga Charles Wesly Mumbere Irema-Ngoma, said the allegations were the works of people looking to mar relations between the kingdom and central government.

He said the propaganda is being milled and perpetuated by a group of anti-Rwenzururu, whom he did not name.

“There is a group of people who can best be described as enemies of Rwenzururu that are fabricating and circulating such propaganda,” Omusinga Mumbere said shortly after the second Mass.

Speaking in a mxiture of Lukhonzo and English, the king added: “Even if it were true, Obusinga Bwa Rwenzururu (Rwenzururu kingdom) would not use such base methods to declare its intention.”

He said states are created under well-defined procedures laid down by the United Nations (UN).

“God is our advocate. But if such a  thing [creating a Rwenzururu state] ever happened, it would be done openly but not behind closed doors because God will have drawn the implmenetation plan.”

He said the document containing the allegation is a photocopy of a very old version whose words can hardly be deciphered.

“The photocopied document  also bears a forged siganture of the Omusinga,” he said, adding it was circulatiing on the streets of Kasese and elsewhere in the western Ugandan dynasty.

“It is being done purposely to create confusion between the Rwenzururu, the central Government and our neighbouring country [DR Congo],” said the cultural leader.

“So the purpose of my communication today is to clear the air,” said Mumbere who was flanked by his wife, the Rwenzururu queen, Agnes Ithungu.

He commended all the Banyarwenzururu for maintaining peace despite the previous tensions experienced last year.

true
President Yoweri Museveni being received by King Mumbere and his wife and bishops Nzeberende and Nkaijanabwo. PHOTO/John B. Thawite

New Vision has not obtained a copy of the said document yet, but according to the kingdom spokeperson, Patrick Nyamungu, it is a 12-page document, he understands.

He said he had not seen it himself yet though.

“People have been calling me to congratulate us upon the creation of an inpendent state and alleging that the UN has okayed it,” said Nyamunungu.

“Asking for a state is not an abomination. But if it were to be granted, proper procedures would be applied.”

The spokesman mentioned that the allegations are being linked to Omusinga Mumbere’s private visit to Germany and Austria in Novemebr and December last year.

“The people behind the allegations are saying King Mumbere finalised the plans to create the state with our brothers in eastern DRC,” he said.

“Much as the Bakonzo of Uganda and their eastern DR Congo counterparts (the Banande) share historic and blood relations and have shared various conferences, we have never discussed such an issue as creating a separate state.”

Speaking to New Vision on phone, Nyamunungu  explained that the idea of creating a separate state had been fronted before, shortly after Uganda’s independence (1962), because the Bakonzo were not in the country’s constitution and hence stateless.

“But after independence and the declaration of a Rwenzururu kingdom by the Rwenzururu freedom fighters led by THE late Isaya Mukirania, the idea was abandoned,” he stated.

Isaya Mukirania, Omusinga Mumbere’s father, died in 1966 and was succeeded by Mumbere with the guidance of regents.

With the abolition of cultural institutions in Uganda by the Obote I government, the Rwenzururu kingdom went underground until October 2009 when it was officially recognised by the ruling NRM government.