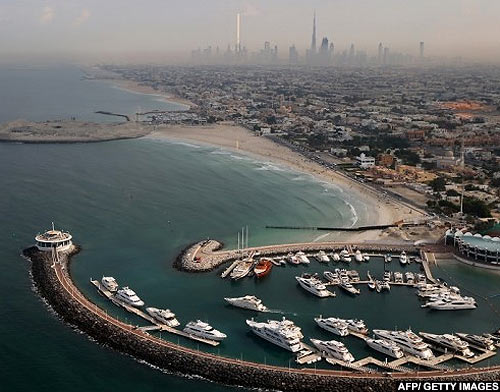 Summary of the story


DUBAI - A Ugandan man attempted to commit suicide in the middle of a busy Dubai street in the United Arab Emirates (UAE) on Wednesday, witnesses said.

Onlookers said he jumped from the fourth floor of a building and crashed into the garage beneath.

Fortunately, the man, identified as Henry Buwembo, did not die, but both his legs were seriously fractured.

Local police said no one else was injured.

Buwembo, aged 35, is said to be in Rashid Hospital being taken care of by one of his workmates. However, he has further developed mental instability, which is scaring his colleagues.

According to Paul Mulumba – his colleague who has been in Dubai for some time – Buwembo wrote and left a suicide note in his room, saying he was disappointed by what he was promised when he went to Dubai.

With its ever growing skyline, Dubai attracts many foreigners looking for jobs every year

‘Worst job in my life’

The suicide message said the money he had been promised while still in Uganda was much less and that the working conditions were poor, with no job security.

Mulumba said Buwembo was earning 300 Dinars (sh210,000) and that he informed the frustrated man’s wife who resides in Kololo, Kampala about the incident.

He added that Buwembo had been taken to Dubai by Serengeti External Recruitment Agency Company in December last year.

“This was worst job in my life,” he wrote.

“I did not know that it would be like this. I should have stayed at home instead of coming here to struggle for nothing.”

Ugandans working in the UAE who Saturday Vision talked to request that the Ugandan government intervenes and help their colleague because the company that took him to Dubai neglected him.

When Saturday Vision called Serengeti External Recruitment, the person who answered the phone wondered where we got the information from and he refused to give any comment.

The male voice on the other end of the line, however, promised to send the telephone number of a person in charge within two hours.

But he later switched off his phone.

Serengeti International is a registered recruitment and employment agency that helps Ugandans to find jobs within Uganda and overseas.

Fred Enanga, the Uganda Police spokesperson, said he did not know if the company was registered and what the terms of the contract were.

“But we shall be interested in establishing if there is any case of human trafficking. I should also add that attempting suicide is an offence and Buwembo can be charged. Suicide is always a cowardly act.”

He, however, advised Buwembo to report to the police.

“Their anti-human trafficking section can verify if the company is genuine or not,” said Enanga.

Costly kyeyo: What you see is not what you get