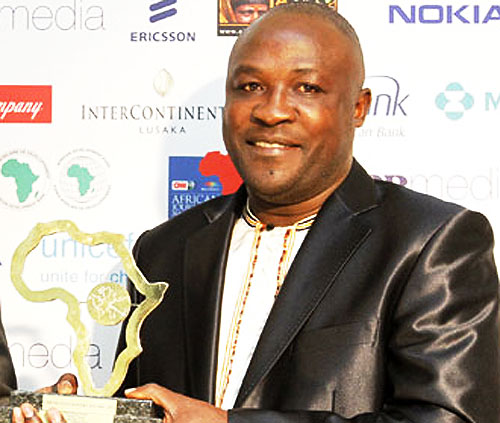 IT all started subtly; all he had were his dreams and an unassuming desire to inform the masses about something he cared so much about-the environment.
TOP Life Style STORY
Mon Jul 30 2012 .
PROFILE: New Vision's award winning journalist Gerald Tenywa

IT all started subtly; all he had were his dreams and an unassuming desire to inform the masses about something he cared so much about-the environment.

IT all started subtly; all he had were his dreams and an unassuming desire to inform the masses about something he cared so much about-the environment. There was no way of telling there would be successes registered or accolades  received, just someone trying to impact society the only way he knew how to.

It is out of these simple dreams, the resolute steps that ultimately took Gerald Tenywa to pinnacles revered by so many in his profession.

The judges reasoned that while environment stories are not usually exciting; Tenywa’s particular story is an exception, a simple story told so brilliantly.

“Gerald has amazing journalistic skills and has brought to the fore something that most Africans have not thought about before now,” the judge said.

The awards, which rotate location each year in tribute to their pan-African credentials, were held at a Gala ceremony hosted by CNN and Multichoice at Auditorium Hall, Government Complex.

Tenywa  was one of 34 finalists at the awards ceremony held in Lusaka, Zambia on July 21. The annual awards are arguably the most coveted media awards on the continent.

Coming to this stage did not happen overnight for the writer; far from that actually. Tenywa has been participating in these competitions for the last five years, since 2007. For the first time, he made it to the nomination list and went on to win. One thousand eight hundred journalists applied and he came top of that list.

“I am most excited about this award because it is quite competitive,” he says.

And while this prestigious award is the brightest moment in his career; Tenywa was already a decorated journalist. Thanks to his coverage of issues affecting the environment; he owns a wide collection of accolades.

He had just started a fulltime career in journalism in 2002 when he was awarded by NEMA for his outstanding contribution in environment reporting.

In 2009 he was Media Award winner under the ‘100 years for Nature Awards’ organised by Nature Uganda.

He was consecutive winner, in 2010 and 2011, of the Print Category of the Sustainable Tourism Awards organised by STAR-Uganda, a USAID project, and in 2011 he also won the Ozone Africa Media Award given by the United Nations Environment Programme. He has won a total of 15 awards.

How his career began
There was a sign that Tenywa was fond of the environment as early as his late teens at Kings College Budo so when he joined university, a Bachelor of Science in Forestry is what he pursued. In 2007 he did a post graduate diploma in environment journalism.

“Through my work, I saw all these environmental challenges and decided to write  about them. That was 1998,” he recounts.

There was positive feedback from the newsroom, the editors liked his first stories, and that was the beginning of environment writing for him. For the next three years Tenywa juggled both his job and writing on issues affecting the environment. He received guidance and training on the job and gradually improved his writing skills.

“In 2001 I decided to specialise in environment journalism. I felt it was a bigger platform and I would  communicate to a wider audience.”

Challenges
Similar to many professions out there; journalism has plenty shares in challenges.

“You invest a lot of time writing a story and it is not published. Most environment stories are upcountry in places like Bwindi; that is expensive and consume a lot of time.”

At the end of the month, sometimes,Tenywa finds himself writing fewer stories than he ought to. He argues that leadership in this country protects people harming the environment.

“Facilities are built right at the lake because some big shot built it there.

“Wetlands and forests have been destroyed by them because leaders connive with them to sell off wetlands.

This is work where people whose dubious acts you are exposing send you threats.

I was from a science background with no skills in journalism whatsoever; so there were challenges.

He had to learn how to write news and feature stories from scratch.

But challenges are just that- challenges. They have nothing on the satisfaction he achieves when his story makes a positive impact.

“I am passionate about my work. When what I write influences policy decisions, creates an inspection; I am happy impacting on society. It keeps me going.”

“I also make sure I do thorough research and have all my facts right in the stories, so that when the story is out, the people involved have nothing to complain about.”

Success usually does not come to loners but people who live and work with others and Tenywa’s story is one such example.

“I have my supervisors, editors, and colleagues to thank for where I am in my career. They have features, and business stories,” says the father of two.

Tenywa’s father passed away when he was still a toddler and his uncles, Wilber Igulo and Godfrey Kaggwa and aunt Jesica Kisiti raised him.

“They took me to good schools and supported me all the way through university,” he says.

Gerald wants to see Uganda achieve her vision of being green and prosperous.

“I look forward to seeing the population use the country’s resources in a sustainable manner, with less people depending on nature alone. What is most at stake in this world are resources yet we take them for granted,” he says.