Home
NEWS
MEDIA
Supplements
Tenders
Notices
oday, JOSHUA KATO bring you the life and times of Maj. Gen. Fred Rwigyema, the none Ugandan who fit more into the Ugandan army

oday, JOSHUA KATO bring you the life and times of Maj. Gen. Fred Rwigyema, the none Ugandan who fit more into the Ugandan army

To mark 50 years of Uganda’s independence, New Vision will, until October 9, 2012, be publishing highlights of events and profiling personalities who have shaped the history of this country. Today, JOSHUA KATO bring you the life and times of Maj. Gen. Fred Rwigyema, the none Ugandan who fit more into the Ugandan army, had a heart for his countrymen whose love for a peaceful approach to the Rwandan armed struggled cost him his life

Major General Fred Gisa Rwigyema had cut his teeth as a fearless soldier way back as a young man during the war that overthrew Idi Amin.

It was not surprising that because of this the Front for National Salvation (FRONASA) leader Yoweri Museveni selected him as one of his body guards. He rose through the ranks as one of the best NRA field commanders and then just four years after NRA captured power, he decided that it was time to go back to his home country, Rwanda. Rwigyema’s life was, however, cut short on the second day (October 2 1990) of the Rwanda Patriotic Front (RPF) liberation war against the regime of Juvenal Habyarimana. 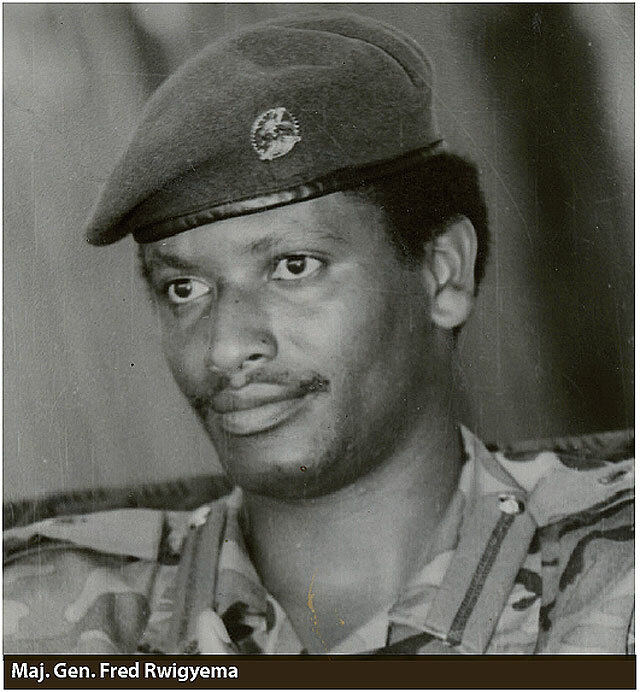 Background
Fred Rwigyema was born on April 10, 1957, in Mukiranze village, Kamonyi district in the south of Rwanda. A Tutsi, in 1960, he and his family fled to Uganda and settled in a refugee camp at Nshungerezi, Ankole, following the Hutu revolt of 1959 and the oust of King Kigeli V Ndahindurwa.

After completing high school in 1976, he went to Tanzania and joined the FRONASA, a rebel group headed by President Yoweri Museveni, the brother of Rwigyema’s best friend, Salim Saleh. Later that year, he travelled to Mozambique to the Front for the Liberation of Mozambique rebels who were fi ghting for independence from Portugal.

A commander to remember
Fred Rwigyema, like Saleh, was a dare-devil fi ghter. Janet Museveni witnessed one of Rwigyema’s heroic acts, when Rwigyema, Saleh and several other young fi ghters rescued them from a Uganda National Liberation Army road-block in 1980.

“...Saleh, Rwigyema and the others jumped out of the car with their weapons cocked..,” Janet recounted in her Book, My Life’s Story. The rescue was over in a few minutes, leaving the soldiers at the road block be wilded! A few years ago, Col. Muhoozi Kainerugaba, talked of Rwigyema as an accomplished soldier. “I was involved with him a lot as a child because he formed part of my father’s body guard unit,” Muhoozi said.

In fact, Muhoozi admitted that it was because of his admiration for Rwigyema that he joined the army. Rwigyema was among the NRA’s fi rst combatants. Among his early roles in the bush was being deputy commander of the First Mobile Force, the most accomplished fi ghting unit of the NRA guerrilla group. Among other key battles, attacked Masindi barracks. In February 1983, NRA’s Mobile Brigade commander, Salim Saleh, was wounded in fi erce fi ghting with government forces at Bukalabi on February 21.

Maj. Gen. Pecos Kutesa, while narrating this incident in his book, Uganda’s Revolution 1979-1986 - How I saw It, recalls how Fred Rwigyema broke down and cried when he saw an injured Saleh being carried away to the rebel headquarters. Rwigyema and Saleh were too close that after Rwigyema’s death, Saleh took charge of his friend’s family.

The Bukalabi battle demoralised the NRA because not only was the top rebel fi ghter injured, but about 10 senior NRA fi ghters, including Mwebaze Rwamurinda and Hanington Mugabi Kanunda, were put out of action. This did not deter Rwigyema from fi ghting on. In March 1985 when the NRA opened up a second front popularly known as the Western Axis, Museveni appointed Rwigyema its commander. After the NRA captured power in 1986, Rwigyema became deputy minister of defence. He was regularly at the front line in northern Uganda during the new government’s offensives against remnants of the ousted regime.

“We won total victory in 1986. This time, on account of the progressive forces being in control of the situation, the fi ghters from among the Banyarwanda refugee community that had been with us in the struggle could not be purged from the new Ugandan army, NRA,” says Museveni. “Although there were some chauvinist sentiments lingering about, this time my pan-Africanist ideas gained the upper hand because I was in control. The refugee Banyarwanda fi ghters were this time fully integrated in the NRA, Fred Rwigyema becoming a major general when we introduced ranks in January 1988. Fred Rwigyema kept telling me about their homeland Rwanda — from which they were excluded by the sectarian regime that was in charge,” the President notes.

Museveni praises
In honour of one of his best soldiers, Museveni recounted: “Towards the end of 1976, we had recruited a fresh batch of fi ghters from within Uganda that included one Rwandan refugee youth, Fred Rwigyema. “I took this batch to Mozambique. After the defeat of Idi Amin, a new force was then selected from amongst the fi ghters from the numerous groups. However, Rwigyema and his fellow Rwandese were denied this chance. They could not be allowed into the new army, Uganda National Liberation Army (UNLA) because they were ‘foreigners’.

Museveni had seen the fighting gem that Ryigyema was and decided to retain him as his body guard. Rwigyema and his colleagues from Rwanda, including Paul Kagame, did not move away from the objective, a long term objective to go back home to Rwanda. They started mobilising. “Given the unresolved political problems of Uganda, a new and more vicious political, military struggle started on February 6, 1981, when we attacked Kabamba. Among the fi ghters who joined us to attack Kabamba were two Rwandan youth, Fred Rwigyema and Paul Kagame.”

Back home for liberation
It was because of that long created line of loyalty that Rwigyema was never let down by his friends.

“I emphasised to him the importance of doing political work to unite opinions among the Rwandans. That is why I assisted him, sometimes, to go to some places to meet Kanyarengwe who was in exile in Tanzania. When Pasteur Bizimungu and Kajekuhakwa fl ed to Uganda, Rwigyema came to tell me the information they had brought.” Museveni then decided that for the future of the Rwandan struggle, these offi cers could benefi t from further training to add to the NRA guerilla training and experience. “I nominated Fred Rwigyema to go for the Senior Command and Staff course in the US, an opportunity Rwigyema passed on to Kagame because he feared that the Rwandans would have decided on an unguided assault of Rwanda if he did not watch over them.

Death too soon
The manner in which he was killed had two versions. The fi rst version stated that on the second day of the invasion, Rwigyema was shot dead by Rwandan army sniper. But the truth as it came out later was that the general was killed by his own juniors. Reports said on the second day of the 1990 RPF offensive, which was on October 3, Rwigyema was murdered by two of his sub-commanders. However, the death was kept under wraps until a month later in November.

He had called a staff meeting with three close associates - Peter Bayingana, Chris Bunyenyezi and Stephen Ndugute. During the meeting, a fierce argument over strategy developed. Rwigyema wanted to advance slowly in order to politicise the Hutu peasantry and get them to join the RPF. Bayingana and Bunyenyezi wanted to seize power quickly, ignoring the Tutsi-Hutu divide.

The dispute heated up and one of the sub-commanders reportedly drew his pistol and shot Rwigyema in the head. In the resultant chaos, Ndugute escaped and returned to Uganda to inform President Museveni of the events. Museveni in turn sent Salim Saleh to Rwanda, where he found Rwigyema’s body in a swamp where he gave it a proper burial. Rwigyema’s remains buried in Kagitumba until the war ended when they were reburied in the Remera Heroes Cemetery.