KAMPALA - The Scottish Society in Uganda has extended support to pupils with special needs as part of activities to mark the Scottish National Day.

James Macbeth, the chairman of the Scottish Society in Uganda, said they were undertaking charity work in Uganda. Macbeth said they were fundraising activities and the proceeds will go to the Salama School for the Blind based in Mukono district.

The school recently suffered a fire outbreak that saw 11 visually impaired pupils lose their lives in the fire outbreak.

The activities kicked off with the Haggis Chaser Ceilidh Band that flew from Scotland and performed at the Hill Preparatory School Naguru on Friday (November 25).

Macbeth also the GIZ country director for Uganda said the Scottish band that performed at the school will perform at the Sheraton Hotel on Saturday to mark the Scottish national day.

At the school, the children were taught some basic movements and thrills of Scottish dance and culture. They danced along as the band played along to fine tunes and melodies. 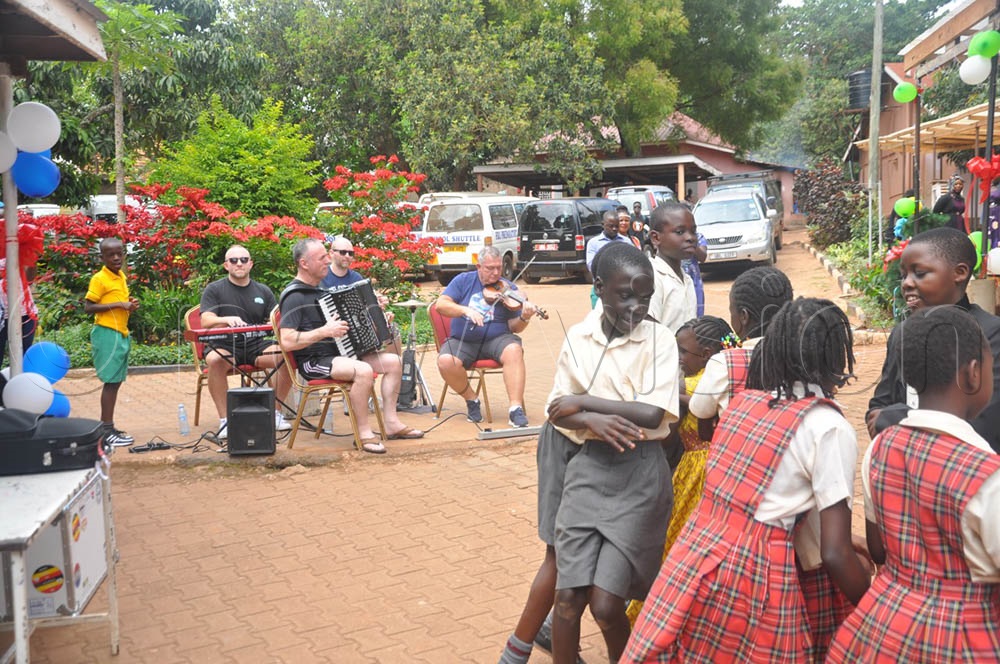 The Haggis Chaser Ceilidh Band from Scotland performing at the Hill Preparatory School Naguru. (All Photos by John Odyek)

David Mwanje the deputy head teacher at Hill Preparatory School Naguru said that as they accepted the band to perform at the school, they also promised to show the visitors some of Uganda’s cultural dances.

The dances included those from Acholi, Bugisu and Buganda.

Mwanje said the children have benefitted a lot from the visit and musical performance by the Scottish band.

“The children have benefitted from the visit. Some of them may not be able to express themselves but they are happy,” Mwanje said.

Nsangi said the parents of the special needs children were doing their best to support them.

“Teaching children with special needs is skills. We need funds to manage the curriculum, it is skills-based. Funds are needed to buy equipment like musical instruments for them,” Nsangi said.

St. Andrew's Day ('Là Naomh Anndrais' in Scottish Gaelic) is Scotland’s National Day falling on 30th November. In 2006, the Scottish Parliament designated St. Andrew's Day as an official bank holiday, but banks are not required to close and it is left to employers to decide whether to give their staff a day off.

Employers are not required by law to give employees a holiday on the St. Andrew's Day bank holiday.

St. Andrew's Day is the feast day of Saint Andrew. The day is celebrated annually on November 30th, as this is the generally accepted date of St. Andrew’s death in 60 AD.

If November 30th falls on a weekend, the next Monday is a bank holiday instead.

St. Andrew was one of the Twelve Disciples of Jesus (Apostles) and was originally a fisherman like his brother, St. Peter. St. Andrew was Jesus' first disciple and is credited with spreading the gospel to Romania, Greece and Russia.

In 60 AD, he was preaching in Patras, where he baptised the wife and brother of the Governor, Aegeus.

The Governor was so incensed by this, that St. Andrew was arrested and crucified.

It is believed that Andrew died on a diagonally transversed cross which the Romans sometimes used for executions and which, therefore, came to be called St. Andrew's cross.

It is said that Andrew could have been crucified on a standard cross, but didn't see himself as worthy enough to die in the same manner as Jesus.