Negative global supply shocks exacerbated by the Covid-19 pandemic have now reached alarming levels. Inflationary expectations emanating from supply shocks and demand-driven COVID-19 bailouts, which were handed by western nations have significantly driven consumer prices to extremities. The United States alone budgeted up to $4.6 trillion dollars for COVID-19 relief funding and vaccine distribution, of which $3.7 trillion have already been spent to combat the pathogen.[i] The Russia-Ukrainian conflict poured more fuel on the already raging inflationary fire as prices of energy and other key commodities, such as wheat, aluminum and nickel have soured to unimaginable levels. In a podcast interview in March of this year, I exhaustively discussed the implications of the Russia-Ukrainian conflict not only on Russia but on the sanction imposing western allied nations as well. Many of my predictions have turned out to be accurate. Many news outlets now echo the same outcry or similar sentiments.[ii]

This time could be worse. The U.S. economy already contracted by 1.4 percent in the first quarter of 2022 and as the second quarter winds down this June, a potential second quarter decline in output could prompt the National Bureau of Economic Research (NBER) to announce to Americans that the recession is ongoing. This will happen when prices of consumer goods are rising as well. A stagflation, which is both rising prices and falling output (rising unemployment) is a lot difficult to tame with policy. As inflationary expectations continue to rise, monetary policy tightening becomes relatively ineffective in subduing inflation. And yet every overly reactionary action by any central bank will deepen the slump (widen the output gap) even more.

It’s like we are back in the 1970s when the Organization of Petroleum Exporting Countries (OPEC) decided to cut the global supply of oil leading to sharp increases in oil prices by 11, 68, and 16 percent in 1973, 1974, and 1975, respectively. It seems like we are rewriting that script as energy and other commodity prices continue to skyrocket.

Following the above discussion, it must be noted that food and energy prices are contributing to more than one-third of the ongoing rising consumer prices, not only in the United States but globally as well. However, European countries have experienced extreme supply-side shocks mostly from rising energy prices and other commodities.  In the United States, core inflation, which excludes food and energy rose by 0.6 percent while headline inflation, which includes prices of all consumer goods were up 1 percent between April and May of 2022. Overall, prices in the United States rose by 8.6 percent on an annual basis from May of 2021 to May of 2022. This is the highest yearly price surge in nearly 41 years, which is still slightly below a price surge of 9.2 percent in the Organization of Economic Cooperation and Development (OECD) countries recorded between May 2021 and May 2022.

While demand-pulled inflation is typically transitory and can easily be tamed down with policy, supply-side cost-push inflation tend to be more structural and have more permanent effects on the trajectory of price-level movements.

When actual inflation and inflationary expectations rise to such high levels, central banks tend to rush to tighten policy. In the 1990s and 2000s, many central banks around the world emphasized the importance of a nominal anchor, such as the inflation rate or the money supply growth, which ties down the price level to achieve the price stability goal. While central banks can have multiple goals to achieve, many were created with a dual mandate of maintaining low and stable prices, while keeping output at full or near full employment.

However, in practice, central banks around the world do place more emphasis on the price stability goal than they do on output (employment) stabilization. Any macroeconomist, who has ever worked with a simple Taylor rule in simulation exercises, knows that, even though the Taylor rule may assign equal weights on the output gap (deviation of actual output from potential output) and inflation gap (deviation of actual inflation from the central bank’s target), when inflation rises just one percentage point above target, the Federal Reserve will raise the federal funds rate disproportionately more than it would lower the target rate if output fell by a similar one percentage point below target (full employment). In other words, monetary policy tightening during inflation and easing during recessions are not symmetrical.

The last paragraph suggests that the central bank with strict monetary policy tightening during a serious inflationary episode will aggressively raise interest rates to constrain demand pressures on prices. Such actions typically lead to large output gaps and a potential of a recession. In other words, the central bank will leave the role of giving poor people painkillers (unemployment insurance benefits and welfare) to the parliamentarians if the unemployment problem worsens. For the United States, that would be suggesting that right and left-wing ideologies in the Republican and Democratic parties will have some common alignments in their definition of poverty and will pursue a universally acceptable fiscal policy response. While many people seem to clinch on the idea that the U.S labor department is strong, based on the June 3rd announcement by the Bureau of Labor Statistics that unemployment remained at a constant rate of 3.6 percent for the month of May as it was for April, many do not quickly notice that unemployment is not only countercyclical but a lagging macroeconomic indicator.

A more serious question is, what does it mean when the economy experiences both extreme rising prices and a potential of falling output? It is important to note that, almost all post-World War II recessions in America and the global economy in general, have been demand-driven with far fewer times when supply-side driven constraints were responsible for deepening the slump.  Even if the employment situation worsens somewhat, with rising prices and sluggish nominal wage growth, America and the rest of the world will severely feel the pain for decades or even generations to come. While few industries have adjusted nominal wages upwards, they are not high enough to keep up with rising prices. They are too little and too late to keep up with the explosiveness in declining purchasing power. After all, the largely debunked Traditional Classical economic philosophy could not be more wrong to suggest that nominal wage and price levels would adjust proportionally. What is more worrisome, is that, when prices are driven by high inflation expectations, which are originating from both demand and supply sides of the economy, once the shocks dissipate, inflation expectations fall to zero. However, prices may stop rising but remain permanently at higher levels from their pre-shock averages, unless there is an extreme positive supply shock alongside constrained demand management policies to somewhat bring prices down. This has severe negative consequences on the poor and the working population, whose nominal wages are sluggishly adjusted to inflation. Some organizations are making a joke out of the situation by allowing only one-time worker compensation adjustment instead of a more permanent change in remuneration, which can keep pace with permanent price-jumps. This is in sharp contrast with the widely accepted Milton Friedman’s 1957 view on the Permanent Income Hypothesis, which says that transitory rather than permanent changes in income do not change consumption and saving behaviors of households.

What do all these global trends mean for a developing country like Uganda? During the 2007-2009 Global Financial Crisis, which had its roots in the U.S. housing meltdown, many African leaders had tremendous amount of euphoria and invincibility that their economies were less exposed to the rest of the global economy and would not suffer the ripple effects of the crisis. While that mentality and reasoning were hard to justify at the time, the current crisis demonstrates explicitly that shocks to the global economy exposes everyone, albeit not equally. It is hard to pinpoint to any country in the world right now, where inflation is not wrecking people’s livelihoods. This is undermining many countries in sub-Saharan Africa, including Uganda at such an alarming rate. While Covid-19 exposed the whole sub-Saharan Africa’s medieval education infrastructure, which could not provide online education to most poor African children during lockdowns, current inflationary episodes are exposing the lack of preparation and readiness of African governments to provide basic safety nets to avert hunger and starvation.

Key structural challenges within the Ugandan economy and potential solutions

One of the legacies of our monetary authority has been credited to stabilization of the macroeconomy. From the middle of the 1990s to 2020, Uganda experienced one of the lowest inflation rates in the region. While inflation came down significantly and averaged between 5-10 percent for most of the 1990s, 2000s and in recent times, lending interest rates have remained elevated and averaging above 20 percent throughout the same period and are among the highest in the East African region. Any central bank policy, which subdues inflation but fails to lower interest rates presents a clear disconnection and departure from monetary theory and practice. Monetary theory and practice should tie inflation to nominal interest rates. The important question is, how does our country, which prides itself on macroeconomic stability in terms of low inflation and decent GDP growth figures continue to experience ridiculously high cost of capital? There are only two possible explanations to this monetary mystery. Either private banks may be engaging in significant interest rate-gouging or there are structural challenges within our economy, which raise the cost of doing business by banks even when inflation is at all time low. It is the duty of a central bank to come up with stringent rules against interest rate-gouging and to identify actionable solutions to contain potential structural constraints in the economy, which raise bank operational costs, especially in the loanable funds market.

Connected to the last paragraph, I have recently had a conversation with one of the individuals who crafted the Parish Development Model, where the government plans to disburse cash at parish levels across the country. My concern as an economist is that any cash advances to the public must have the goal of jumpstarting labor productivity at the grassroot levels. Otherwise, cash distribution without any mechanism to increase the productivity of the farmland may only create demand-pulled pressures on inflation and constrain the ability of the monetary authority to achieve the price stability goal. One of the key ingredients to solve the ongoing food crisis in the country is to strategically identify agricultural zones in all regions of Uganda, where sustainable irrigation infrastructure can be properly installed. This can go along with the strategy of separating areas, where perennial crops thrive from those where food crops with short-term gestation periods can be massively produced with mechanization and proper irrigation infrastructure. With the looming global food crisis and climate change, the times for reliance on rainfall (mother nature) by African farmers are over. 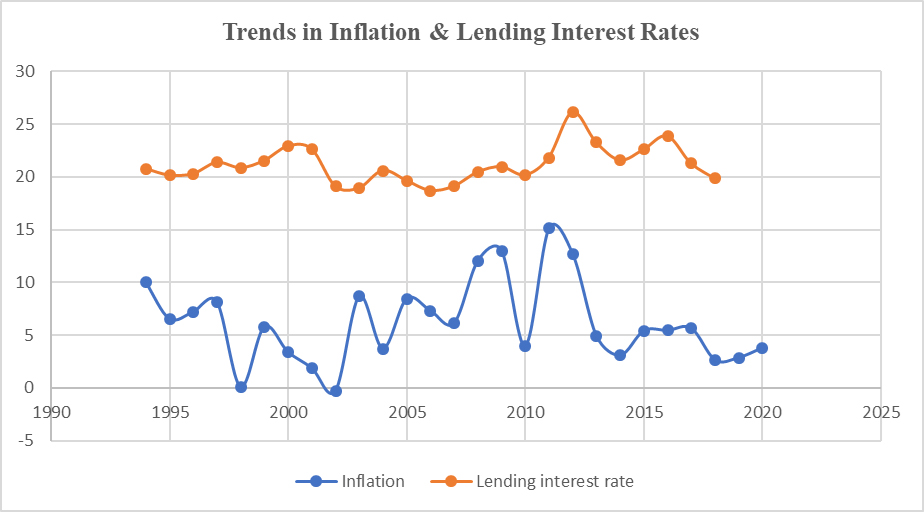 The writer is an associate professor of economics at Texas State University, USA