Key among the roles of village health teams (VHTs) is to sensitise the community on best health practices, including family planning, care for children under the age of five, vaccination, sensitization on programmes for pregnant women, and follow-up on antenatal and postnatal care, writes Cecilia Okoth.

On a cloudy Thursday afternoon, Milly Among, a community health worker in Oyam district, braces herself for duty. She is set to visit Betty Akumu, a resident of Teduka cell, Eastern Ward in Oyam town council, who is due for delivery in a week.

Equipped with a smartphone and medical items to assess the expectant mother, Among starts by asking Akumu about her general wellbeing.

She then dives into educating her on what to expect when she goes into labour. She uses both her smartphone and an illustrative book to package her message to the mother.

Akumu will be having her second child, the first being two-and-a-half years old. Her first pregnancy, she admits, was so complicated that she nearly lost the baby. The code was wrapped around the baby’s neck, a condition that required a caesarean section operation to save both lives.

“I did not attend antenatal care while pregnant with my first child. I simply went to the health facility when I got labour pains and that is when I was rushed to the theatre for operation,” Akumu, 23, recalls. 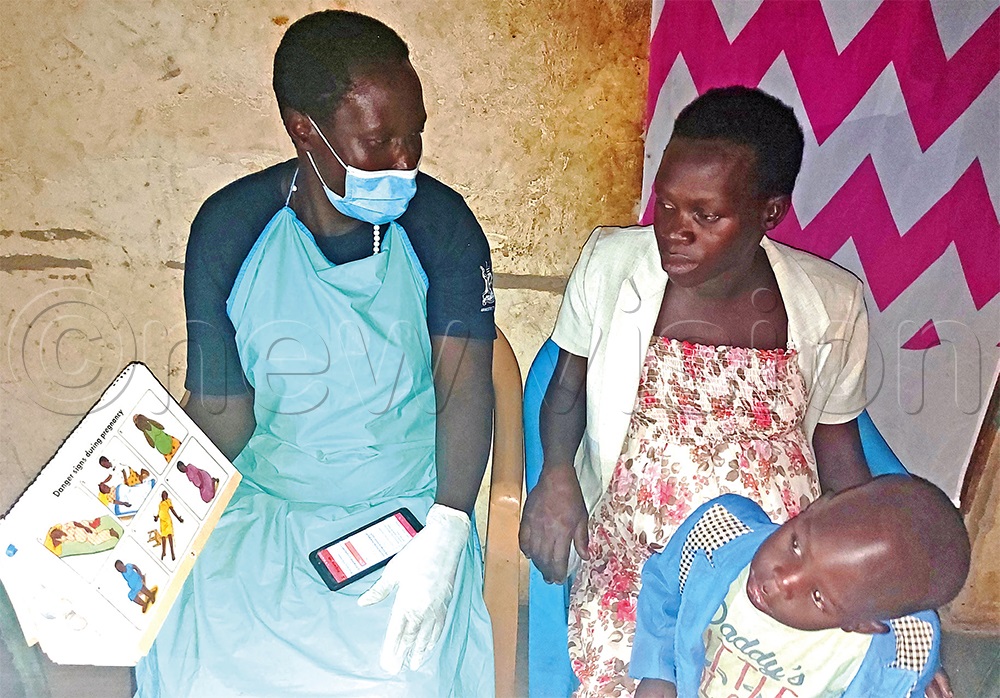 Milly Among, a VHT member, educates Betty Akumu on what to expect as she nears her delivery date

This time around, Akumu was lucky to have Among traverse her village often. She started antenatal care at two months and has been following up her progress up to the last week.

Among spends about 20 minutes with Akumu and just as she is about to head out to her next destination, a sudden downpour starts. This lasts for close to an hour. However, amid the rain, Among’s phone keeps buzzing. She reveals that Agnes Awino, another mother with a sick child, wants her services.

Awino, a resident of Agoa village in Anyeke parish, has a five-year-old son, who has been vomiting, with headache and loss of appetite.

Among advises Awino to go to Anyeke Health Centre IV to rule out malaria.

“If I had an umbrella and gumboots, I would have walked in the rain,” Among says. Her daily target is to visit 104 households.

Key among her roles is to sensitise the community on best health practices, including family planning and care for children under the age of five, vaccination, mobilization and sensitization programmes for pregnant women, as well as follow-ups, antenatal and postnatal care, among others.

Despite her efforts, Among takes home sh10,000 per month. She says much as she would love to engage in other income-generating activities to fend for her family, being a community health worker is time-consuming.

She appeals to the Government to pay VHTs a decent salary that will motivate them to work harder.

VHTs largely work as volunteers in Uganda despite the enormous time and commitment involved. Most incentives are donor-driven, in kind, inconsistent and non-monetary.

VHTs are currently paid a small transport refund of sh10,000 through Primary Health Care (PHC) funds and Results-Based Financing (RBF) from the Uganda Reproductive Maternal and Child Health Improvement project and an extra sh20,000 from partners each month. This gives each VHT worker a total of sh30,000, which is given per quarter. 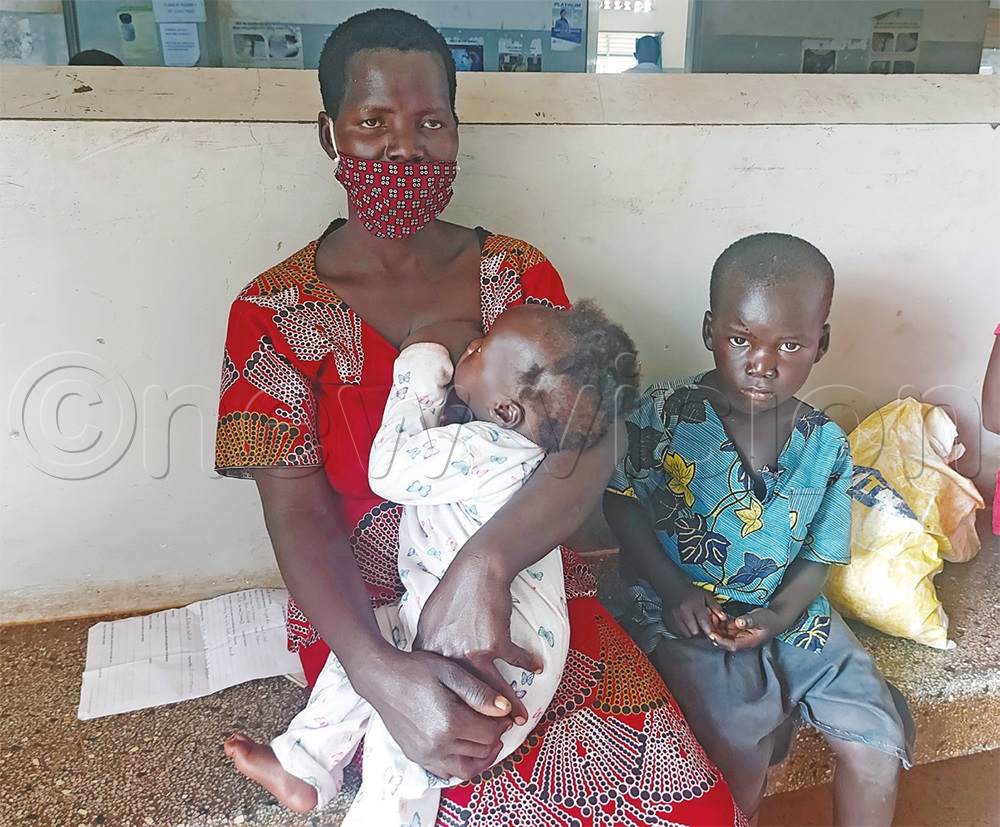 Agnes Awino with her children. She was referred to Anyeke Health Centre IV in Oyam district by a VHT after her son presented with fever-like symptoms

Oyam, which was carved out of Apac district in 2006, has a population of 472,650. This makes it one of the largest districts in Uganda.

The district was selected for the exemplar pilot project based on a number of gaps it has had in service delivery, resulting in poor maternal, neonatal and child health indicators.

John Gutenberg Ogwang, the district vice-chairperson, says the district’s population has rapidly increased, making it hard for certain crucial services, such as health, to be delivered.

“We currently have many people migrating to Oyam from Otuke district in search for land for cultivation. Therefore, provision of health services is a challenge because our health facilities cannot accommodate the numbers,” Ogwang explains.

He adds that the highest health facility in the district is Anyeke Health Centre IV, which operates with inadequate health workers.

At the start of the programme, VHTs were using a paper-based register to submit quarterly reports. This caused delays in reporting into the health information systems, which was compromising report accuracy and timeliness.

Whereas the Government has digitised health monitoring information tools at the health facility level, there is no national community level digital reporting tool, which can enable tracking and measurement of VHT performance.

However, using a smartphone that was provided by Living Goods, Among is able to capture details of the people she has worked on, which information is shared with the district health teams for follow-up.

The mobile phones are powered with an app to support the reporting of community level data. The app is also used as a decision support tool and job aid. This has not only eased how VHTs do their work, but has enabled supervisors to be more targeted in their guidance, as they have access to a tablet and dashboard with real time metrics to monitor the performance of VHTs.

Among is among the 200 VHTs and 13 government supervisors, who were trained to support VHTs to deliver community health services in three sub-counties of Oyam district.

Besides using the phone for work, Among says she has gained a lot of experience on a range of programmes.

Christine Namayanja, the country director Living Goods, says the smartphone provided to VHTs costs between sh450,000 and sh500,000, plus airtime worth sh20,000.

However, the most interesting bit, she adds, is that in the course of going from one household to another, VHTs can still use the phones to assess a patient’s condition without necessarily being connected to the internet. The internet is only required when he or she is making a compilation for the day’s work, which can be done at any point with internet connection.

In the absence of electricity, Namayanja says they also provide VHTs with solar chargers to charge their phones.

OVERCOMING THE BURDEN OF DISEASE

However, since the Community Health Exemplar project was introduced two years ago, some of what they were grappling with has since changed.

“There has been an increase in the number of mothers attending antenatal care within the first three months in the health facilities. We have also seen an improvement in postnatal care and have been able to help mothers who developed complications during childbirth,” Malinga says, calling for the need to have the project scaled up countrywide.

Regarding HIV, Malinga says VHTs, if well-equipped, are capable of testing the viral load of people living with HIV in communities, as well as reminding clients who are due for their next appointments to go to health facilities for review. The district has a total of 4,392 VHTs, however, 2,112 are currently active.

On compensation for VHTs, Malinga says Uganda pays VHTs the least amount of money across the region. In neighbouring Kenya, VHTs are paid sh100,000 per month, while Rwanda pays them sh114,000 for the same period.

Countries such as Malawi and Zambia pay VHTs an equivalent of sh114,000 and sh95,000, respectively per month.

It is against this background that Malinga urged MPs to advocate for better facilitation for VHTs in Uganda, saying these make significant contribution to preventing diseases at the community level.

“If motivated well, each VHT has the capacity to handle 100 households.”

Despite significant improvements in the global under five mortality rate over the years, many children continue to die from preventable, but treatable diseases.

In Uganda, primary healthcare has been the key means for addressing and delivering some of the health services at the community level.

Whereas primary healthcare has been recognised as an essential element of health systems globally, financing for it varies widely by country, ranging between 2% to 56% of total government spending on health.

The Government currently contributes 57% of the health budget, while the rest comes from development partners.

However, only a small proportion goes to primary healthcare service delivery at the community level, yet it is a critical means evidenced to save lives, particularly children under

VHTs do not replace licensed doctors, nurses and other trained healthcare providers. Rather, they help relieve the burden on hospitals and facilities in resource-strapped areas by reaching more people before their health conditions turn life threatening.

When integrated into the larger primary health system, they can help close the healthcare gap faster and are cheaper than health facilities.

Joel Ssebikaali, the deputy chairperson of Parliament’s health committee, says having a national health insurance in place would solve the existing challenges in the health sector.

“Paying VHTs sh30,000 per quarter is a mockery. However, I cannot lie that we shall immediately budget for an increase in pay. There has to be strong political will to support VHTs financially,” Ssebikaali said.

He added that all countries that have achieved community health progress have a national health insurance in place.

Ssebikaali said MPs have carried out benchmarking studies in countries, such as Rwanda, Kenya, Zambia and Ghana and have advised the President to assent to the national health insurance in vain.

“Now that the Government wants to mainstream resultsbased financing (RBF) into public healthcare (PHC), it is now clear that part of the money meant to motivate health workers must be extended to VHTs as well.

‘‘Initially, what the district was doing was to only take sh10,000 out of the PHC fund, but now, RBF is coming in to supplement what partners are giving (sh20,000) for sustainability purposes so that when partners go away, funding can still exist,” Upenytho says.

He adds that districts only need to agree that the money is provided to VHTs. At the peak of the COVID-19 pandemic last year, Upenytho said VHTs working under the COVID-19 taskforces were paid a monthly allowance of sh100,000.

However, the funds, he says, were only disbursed in July, August and September and that not every VHT was paid. “That money disappeared and did not cater for everyone. We are still following up to date.”

“VHTs are the bedrock of service delivery to the communities. They visit households, sensitising them on preventive and curative services. They initially started with integrated community case management of malaria, pneumonia and diarrhoea diseases, but have since expanded to providing TB, HIV, nutrition and palliative care services for cancer patients, expanding their scope of work,” Upenytho concludes.