Adama Barrow comfortably won a second term in The Gambia's presidential election, with thousands of his supporters celebrating in the streets of Banjul, although his opponents disputed the results announced late Sunday.

Barrow, whose assumption of the presidency five years ago ended more than 20 years of dictatorship, garnered more than 53 percent of the vote, according to results released by the electoral commission. His main challenger Ousainou Darboe won 27.7 percent.

Saturday's election, the first since former dictator Yahya Jammeh fled into exile, is seen as crucial for the young West African democracy. 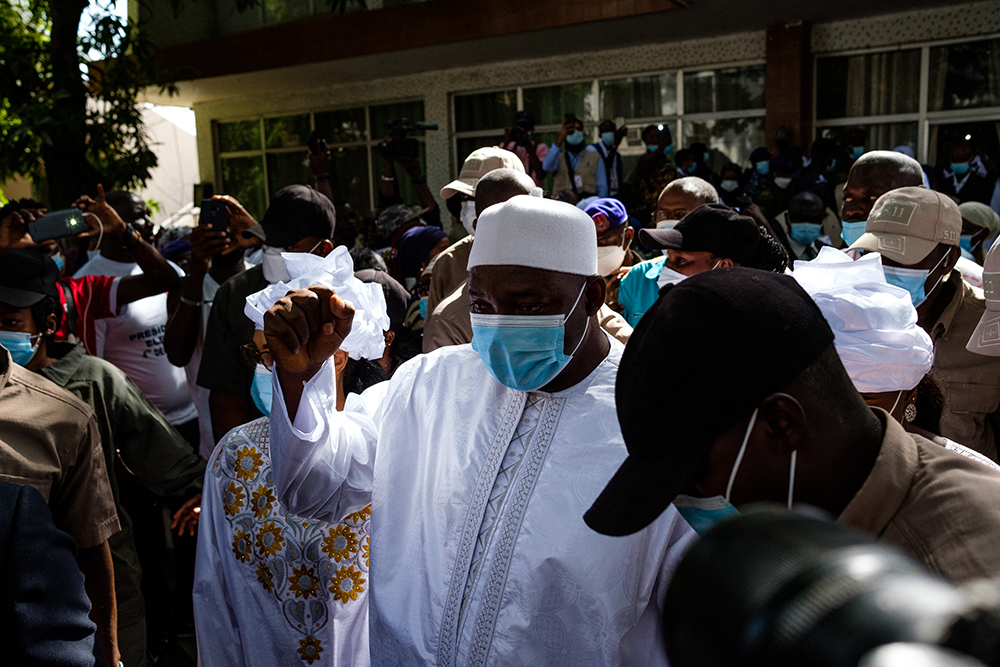 Crowds of Barrow's supporters marched through the streets of the capital to a din of horns and danced on a vast esplanade.

Barrow received a standing ovation when he addressed them with "a great sense of joy and humility" and called on his supporters to respect those who voted for his opponents in a "free, fair and transparent election". 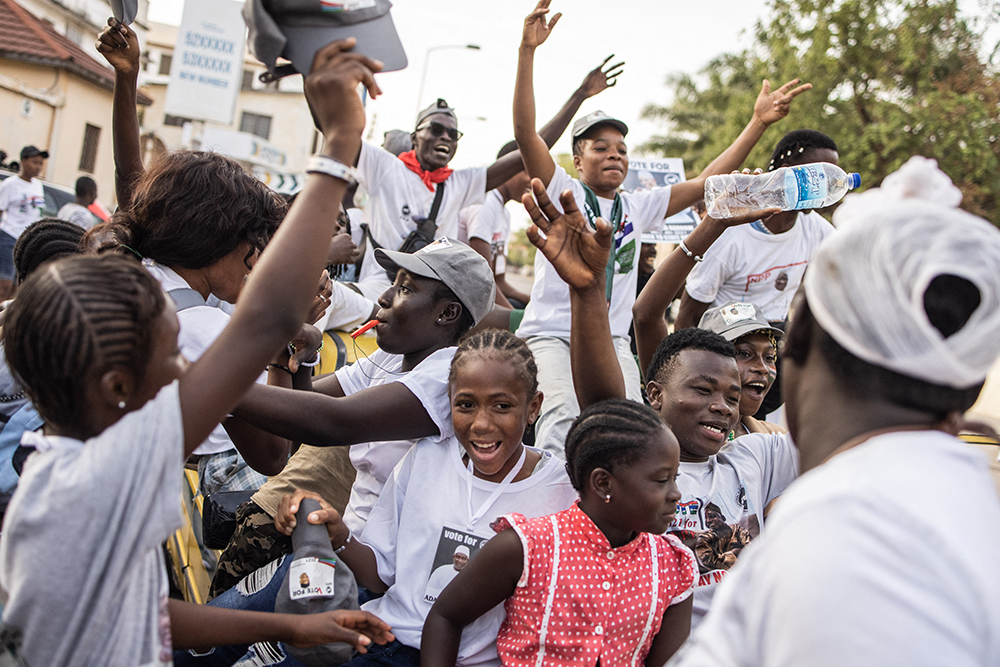 Supporters of incumbent President of Gambia Adama Barrow celebrate on a street as he appears to be on course for re-election as partial results from most districts place him in the lead, in Banjul on November 5, 2021. (Photo by John Wessels / AFP)

"I will do all I can and utilise every resource at my disposal to make The Gambia a better place for us all," he said.

Before the full results were announced, three of Barrow's rivals had rejected partial results that gave him an early lead.

"At this stage we reject the results announced so far", Darboe and two other candidates said in a joint statement. "All actions are on table." 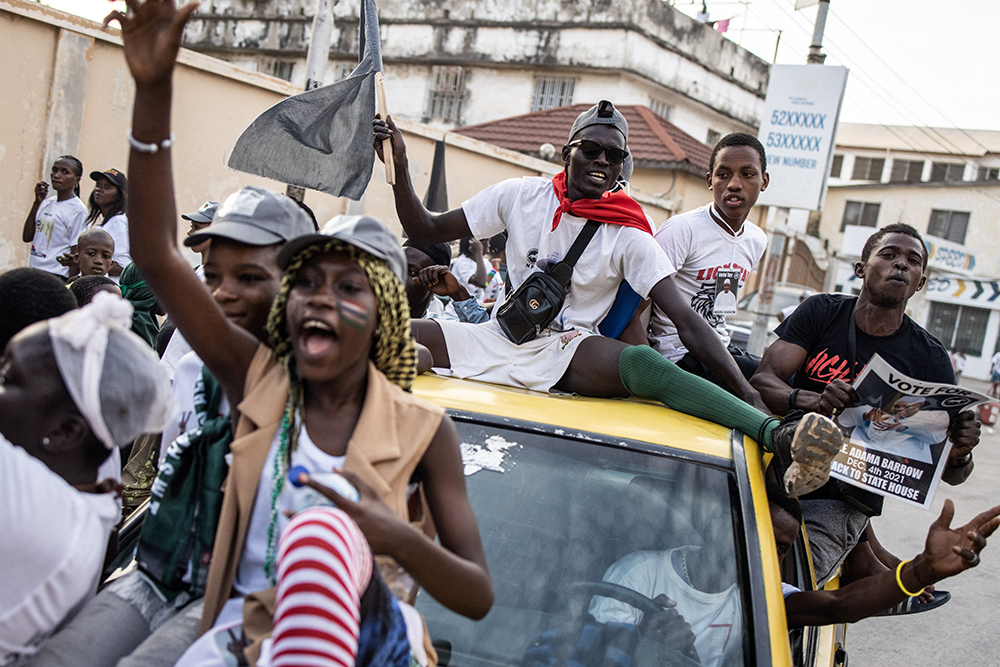 Supporters of incumbent President of Gambia Adama Barrow celebrate on a street as he appears to be on course for re-election as partial results from most districts place him in the lead, in Banjul on November 5, 2021. (Photo by John Wessels / AFP)

Gambians flocked to the polling booths Saturday to choose who would lead their country -- the smallest in mainland Africa -- for the next five years, with turnout at 87 percent, according to official results.

Earlier Sunday, Ernest Bai Koroma, head of an election observation mission from the Economic Community of West African States (ECOWAS), appealed to all the candidates "to accept the outcome of the election in good faith.

"There will be no winner or loser but only one winner, The Gambian people," he said in his statement. 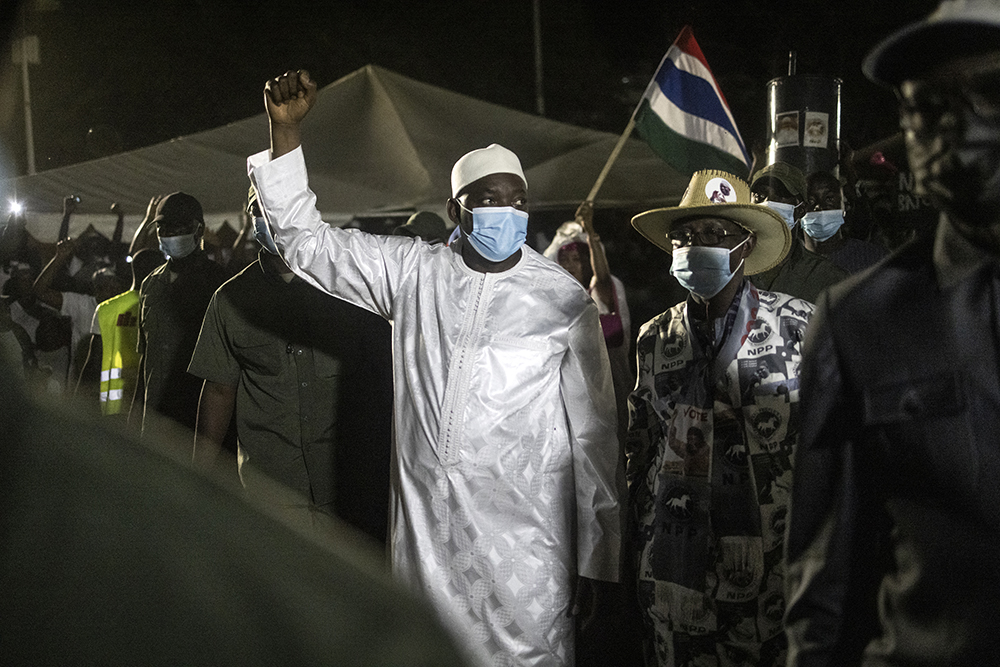 President of Gambia Adama Barrow gestures to his supporters during his final campaign rally in Banjul on December 2, 2021, two days ahead of presidential elections. (Photo by JOHN WESSELS / AFP)

The election is being closely watched as a test of the democratic transition in The Gambia, where Jammeh ruled for 22 years after seizing power in a bloodless coup in 1994.

He was forced into exile in Equatorial Guinea in January 2017 after Barrow, then a relative unknown, defeated him at the ballot box.

Barrow, 56, faced five challengers in his re-election bid, and the vote count was slow in part because of the country's unusual voting system.

Illiteracy is widespread in The Gambia, so voters cast their ballot by dropping a marble into a tub marked with their candidate's colour and photo -- a practice dating back to the country's past as a British colony. 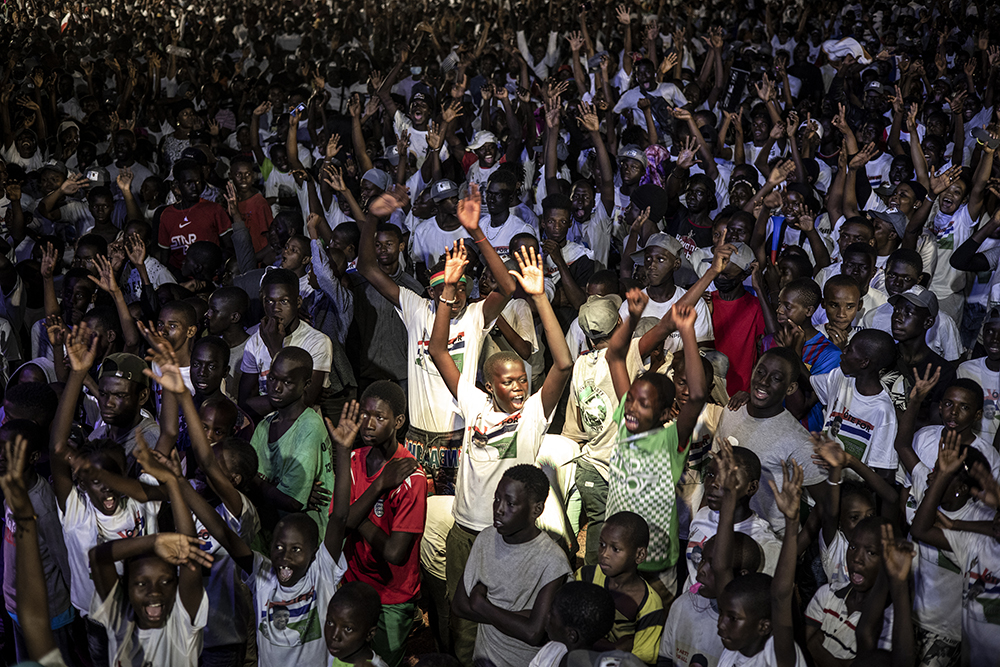 Supporters of President of Gambia, Adama Barrow celebrate after winning the presidential elections in Banjul on November 5, 2021. (Photo by JOHN WESSELS / AFP)

Many of the roughly one million eligible voters in the nation of more than two million people are hoping for an improvement in their living standards.

The Gambia, a sliver of land about 480 kilometres (300 miles) long surrounded by Senegal, is one of the poorest countries in the world.

About half of the population lives on less than $1.90 per day, the World Bank says.

The tourism-dependent economy was dealt a severe blow by the Covid-19 pandemic.

Barrow ran on a continuity ticket, pointing to infrastructure projects completed under his watch, as well as increased civil liberties.

Jammeh lost to Barrow in the 2016 election but had to be removed by a military intervention from other west African states. 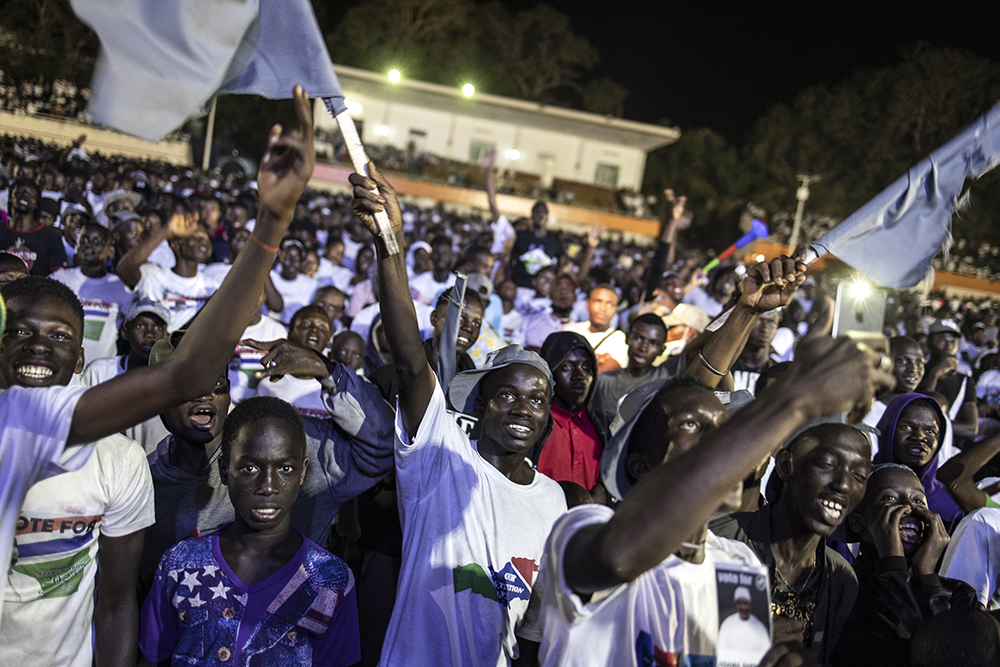 Supporters of President of Gambia, Adama Barrow celebrate after winning the presidential elections in Banjul on November 5, 2021. (Photo by JOHN WESSELS / AFP)

Barrow himself has already gone back on a promise to remain in power for only three years, and has weakened rhetoric about prosecutions for crimes committed under Jammeh.

Questions over Jammeh's continuing role in politics, and his possible return from exile, were central themes in the run-up to the election.

In September, Barrow's NPP party announced a pact with Jammeh's APRC -- a controversial move that was viewed as an electoral ploy.

Jammeh said the decision had been taken without his knowledge, and his supporters formed a rival party. But rights groups fear the pact will diminish chances of a trial.

The former dictator retains significant political support and had sought to influence the vote, remotely addressing rallies of supporters during the campaign period.

A truth commission Barrow set up to probe alleged abuses under Jammeh's rule has called for those responsible to be brought to justice and the president will have to decide whether to follow its recommendations.