Home
NEWS
MEDIA
Supplements
Tenders
Notices
Rihanna (R) waves to fans during the ceremony to declare Barbados a republic and the inauguration of the President of Barbados at Heroes Square in Bridgetown, Barbados, on November 30, 2021. (AFP)

Barbados' most famous citizen, the singer Rihanna, was present at the "Pride of Nationhood" ceremony where the Caribbean island nation declared itself the world's newest republic, removing Queen Elizabeth II as head of state. Prime Minister Mia Mottley announced that the pop star was a "designee for national hero of Barbados", and added: "May you continue to shine like a diamond and bring honour to your nation".

Meanwhile,  Britain's Prince Charles attended the event and evoked "the appalling atrocity of slavery, which forever stains our history".

Fireworks filled the sky over Barbados on Tuesday as the Caribbean island nation declared itself the world's newest republic, lowering Queen Elizabeth's flag as it severed colonial-era ties to the British throne to the sound of jubilant gun salutes.

"Republic Barbados has set sail on her maiden voyage," Dame Sandra Mason said in her inauguration speech as the first president of the country, recognizing the "complex, fractured and turbulent world" it would need to navigate.

"Our country must dream big dreams and fight to realize them," the former governor-general told those gathered for the ceremony, including Britain's Prince Charles. 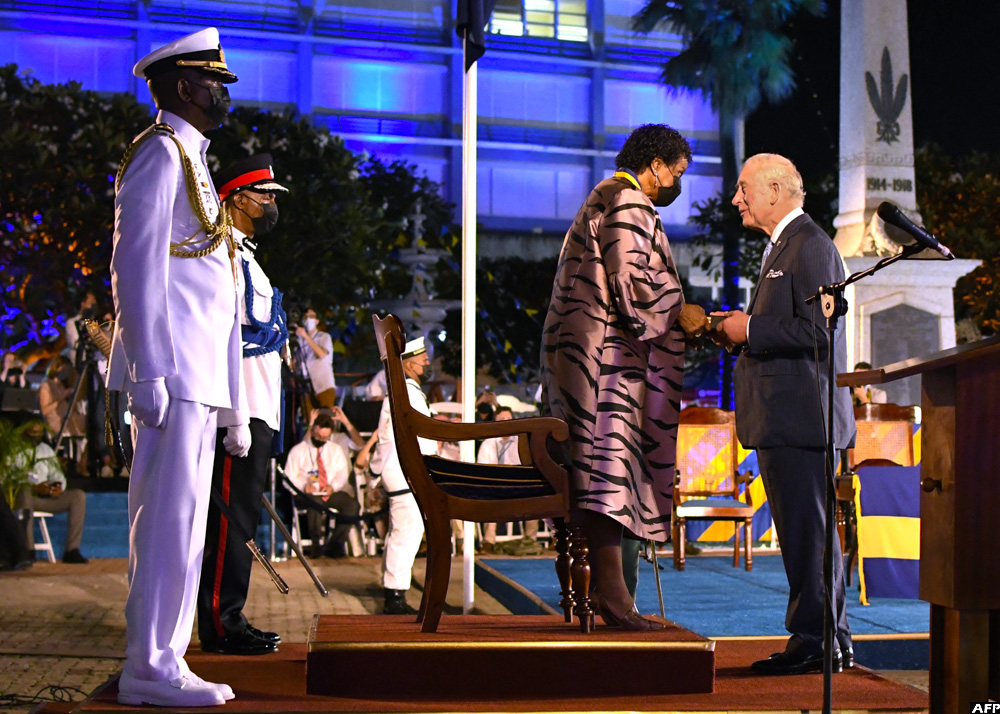 Charles, Prince of Wales (R) receives the Order of Freedom of Barbados from President of Barbados Dame Sandra Mason (2nd R) during the ceremony

The new era for the nation of 285,000 ends Britain's centuries of influence, including more than 200 years of slavery until 1834.

Addressing the matter during the handover, Charles acknowledged the mark slavery had left on the two countries.

"From the darkest days of our past, and the appalling atrocity of slavery, which forever stains our history, the people of this island forged their path with extraordinary fortitude," he told the crowd.

A long-running pandemic curfew was suspended to allow Barbadians to enjoy festivities, which included projections at various points across the country and large fireworks displays timed to mark the historic transition.

The "Pride of Nationhood" ceremony itself was closed to the wider public but Barbados' most famous citizen, the singer Rihanna, took place alongside top officials for the event, complete with military parades, a mounted guard of honor and gun salutes.

One of the first acts of the prime minister of the new republic was to declare Rhianna a National Hero of Barbados: "May you continue to shine like a diamond and bring honor to your nation," Prime Minister Mia Mottley told the international celebrity. 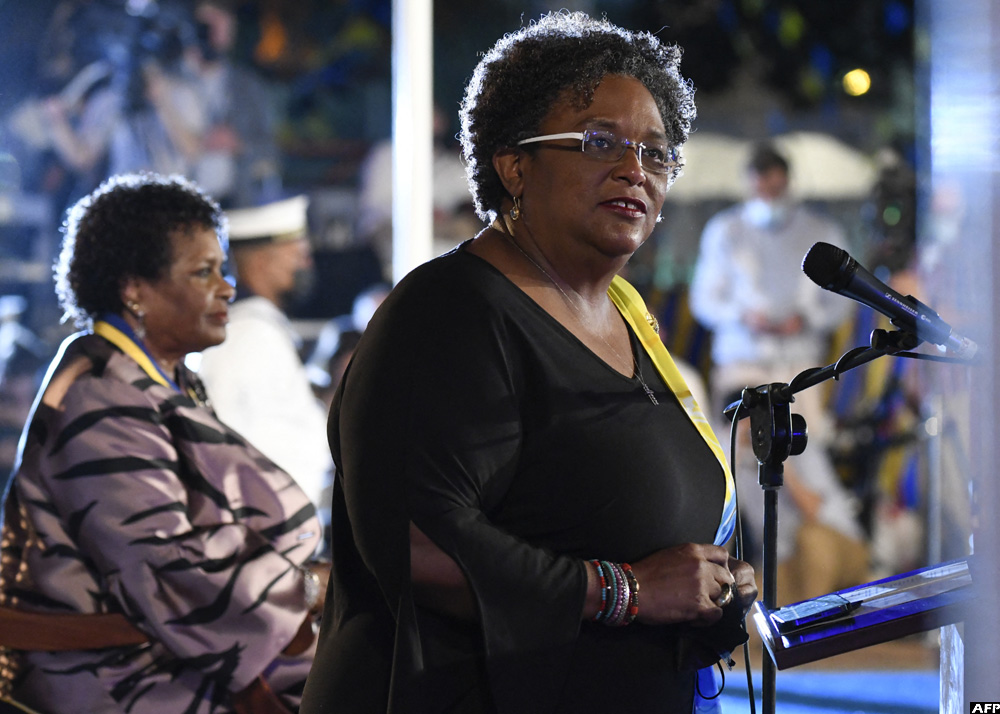 Barbados, famous for its idyllic beaches and love of cricket, won independence from Britain in 1966.

In October, it elected Mason its first president, one year after Mottley declared the country would "fully" leave behind its colonial past.

Some Barbadians argue there are more pressing national issues than replacing the queen, including economic turmoil caused by the Covid-19 pandemic that has exposed overreliance on tourism -- which, ironically, is dependent on British visitors.

Unemployment is at nearly 16 percent, up from nine percent in recent years.

"I know it is something that we were going towards for a very long time, but I think it came at a time which is not necessarily the best time considering our economic situation and the Covid situation," said 27-year-old office manager Nikita Stuart. 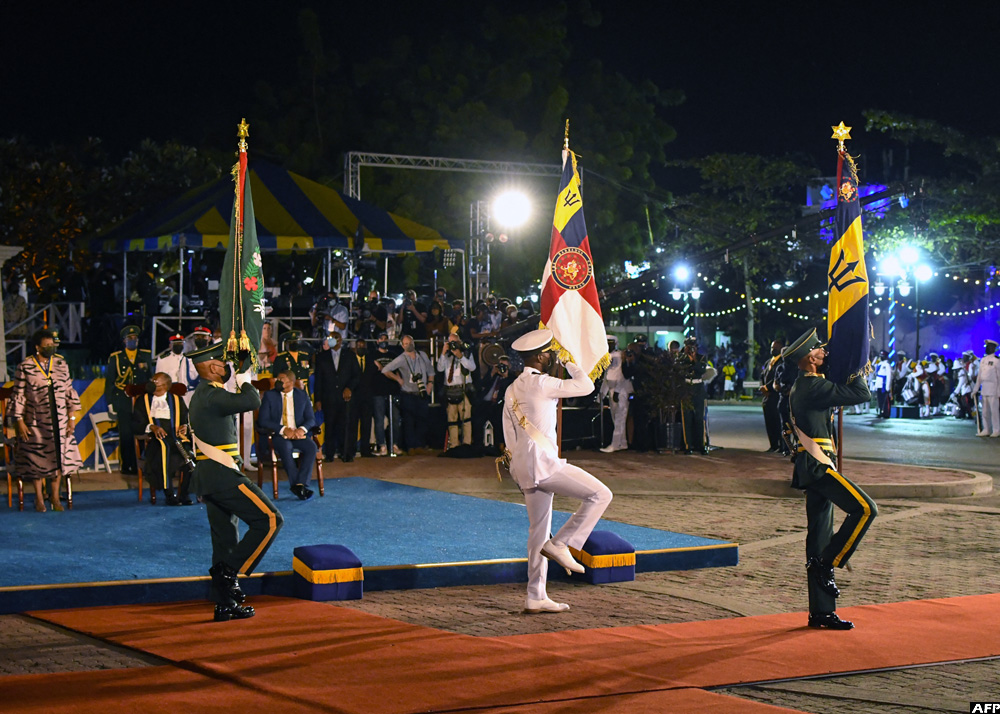 For young activists such as Firhaana Bulbulia, founder of the Barbados Muslim Association, British colonialism and slavery lie behind the island's modern inequalities.

"The wealth gap, the ability to own land, and even access to loans from banks all have a lot to do with structures built out of being ruled by Britain," Bulbulia, 26, said.

For many Barbadians, replacing the queen is just catching up with how the nation has felt for many years.

"I remember in the old days we would be really excited about the queen and Prince Charles and Princess Diana and royal weddings," Anastasia Smith, a 61-year-old nurse, told AFP.

"But I don't know if we ever quite saw them as our royal family. Now, everybody is talking about a republic. I'm not sure that anything about my life is going to change. But I think we're doing the right thing and it's a proud moment for Barbados."

Buoyed by Black Lives Matter movements across the world, local activists last year successfully advocated for the removal of a statue of the British Admiral Lord Horatio Nelson that stood in National Heroes Square for two centuries.

And the end of the queen's reign is seen by some as a necessary step towards financial reparations to address the historic consequences of the use of slaves brought from Africa to work on sugar plantations.

Charles' visit to Barbados was clouded at the last minute by another race row over alleged comments about his grandson.

His youngest son Prince Harry and his wife Meghan -- who has a black mother and a white father -- have said an unnamed royal asked how dark their unborn first child's skin would be.

A new book reportedly claimed Charles was responsible, which his spokesman dismissed as "fiction and not worth further comment."