The larvicide approach in controlling malaria has reduced the spread and prevalence of the disease in the districts of Rubanda and Kabale in Kigezi sub-region, health authorities have said.

A larvicide is an insecticide that specifically targets the larva stage of an insect. Their most common use is against mosquitoes. Through this, experts apply recommended dosages of larvicides in stagnant water containing mosquito larvae in order to destroy them before they turn into adult mosquitoes.

The approach was in June last year launched by the health ministry at Butanda Health Centre III in Butanda-sub-county, Kabale district.

Dr Abdon Birungi, the Rubanda district health officer, said the approach was first tried in Bufundi sub-county where cases of malaria were high and since then positive results have been recorded.

“After launching, we went ahead to do the implementation of the approach. At that time, there were over 60 malaria cases registered in Bufundi sub-county. Only 21 cases were registered a year later in the area with no deaths. This is a promising approach,” he said.

Currently, authorities are promoting the approach in other sub-counties of the district and according to Grace Turyakira, the vector control officer at Rubanda district, the approach is a safe and effective one.

“To prove that the approach is environmentally friendly and not harmful to humans, we even test it when showing the people how we shall be conducting it. This system only targets the mosquito larvae and not any other component of the ecosystem,” Turyakira said. 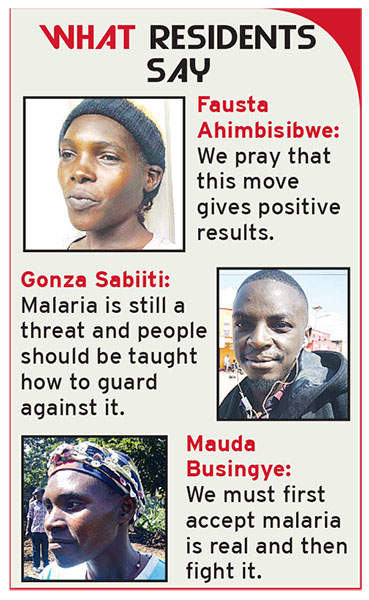 Winnie Komujuni, 46, a resident of Butanda sub-county, said she lost her second child to malaria.

“My son was four years old and we did not know about the control of malaria fever. He died in 1992,” she said.

Michael Muhanguzi, a resident of Kacherere in Bufundi sub-county, said he lost a job opportunity two years ago when he got malaria fever a few days to the interview.

“I was supposed to travel to Kampala on a Monday. Three days to the day, I began feeling weak. I decided to go to bed, thinking that I would be better in the morning but things worsened,” he narrates.

“When the use of larvicides was introduced, I felt confident that finally the enemy was going to be kicked out of our zone and from what I am seeing, we are heading there soon,” he added.

BACKGROUND OF THE APPROACH

Information from the health ministry shows that the approach was introduced as a result of the co-operation framework between Uganda and Egypt.

Uganda signed a memorandum of understanding with Egypt in 2019 and as part of this co-operation, the health ministry proposed strengthening its health systems in the area of malaria control and elimination.

Uganda with support from Egypt agreed to avail larvicides for use in Kigezi sub-region and northern Uganda where malaria fatalities are high compared to other parts of the country.

According to data from the Severe Malaria Observatory, Uganda has the third highest global burden of malaria cases (5%) and the eighth highest level of deaths (3%).

It also has the highest proportion of malaria cases in East and southern Africa (23.7%). There is stable, perennial malaria transmission in 95% of the country. 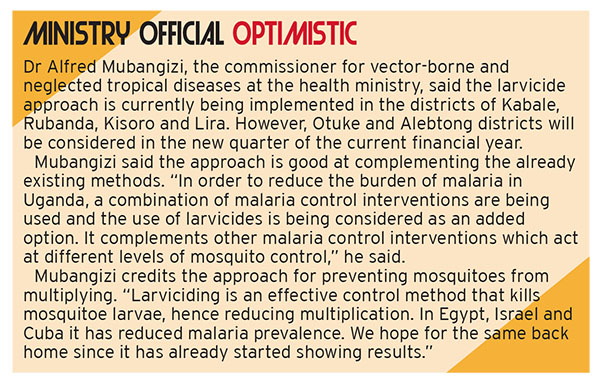