Legislators on the parliamentary committee of physical infrastructure have halted dfcu Bank from auctioning government land in Tororo district.

In 2010, a memorandum of understanding was signed between five stakeholders including Kasoli community in Tororo, the Government of Uganda, UN Habitat, dfcu Bank and Tororo municipal council to improve housing conditions of Ugandans in Tororo district by constructing cost-friendly houses for residents of Kasoli slum.

dfcu Bank provided a loan facility of sh2.5b for the housing project located on a 5.5 hectares of land registered under Uganda Land Commission, but the Kasoli community and the Government have since failed to pay back the loan.

On September 19, 2021, the Kasoli community was served with eviction notices by Bemuga Strict Auctioneers and Court bailiffs. The same land is being claimed by the Standard Gauge Railway (SGR) contactors.

Parliament’s action follows a petition by 250 families in Tororo, seeking its intervention to stop their impending eviction from land they used as collateral to get a loan from dfcu Bank.

Appearing before the committee on Wednesday, led by dfcu Bank director in charge of special assets, Chris Sserunkuma, said: “The loan repayment period which was meant to last 15 years was cancelled six years ago after beneficiaries failed to service the loan. The bank wants to auction this land to recover the money injected into the project.”

Sserunkuma said the bank chose to take drastic measures even before the expiry of the loan term after ascertaining that it was the only reasonable measure to recover the money.

Documents submitted to the committee indicate that on March 19, 2013, dfcu extended a loan amounting to sh2.5b to the Kasoli community for the construction of 250 houses at 22% interest per annum. The borrowers also paid sh37m facility and an additional sh37.5m in legal fees to the lawyers of dfcu for drafting the loan contract.

However, the committee chaired by David Karubanga (Kigorobya County on Wednesday protested the move by dfcu Bank to sell the public land, saying the matter needs to be first investigated.

He asked dfcu to formally write their demands, but requested them to halt their action for 30 days to give Parliament time to complete its inquiry into the matter.

Richard Sebamala (Bukoto Central) said: “We direct the dfcu Bank officials to halt the sale of the land which was scheduled for October 18, for 30 more days pending investigations. We want to ascertain the rightful owner of the land, the true beneficiaries and the right amount of money in compensation. We have appealed to dfcu to halt its measures so that Parliament resolves the matter amicably in the interest of all the parties.”

“We want to listen to all the players involved in the project under the 2010 a memorandum of understanding signed between five stakeholders,” Sebamala said. 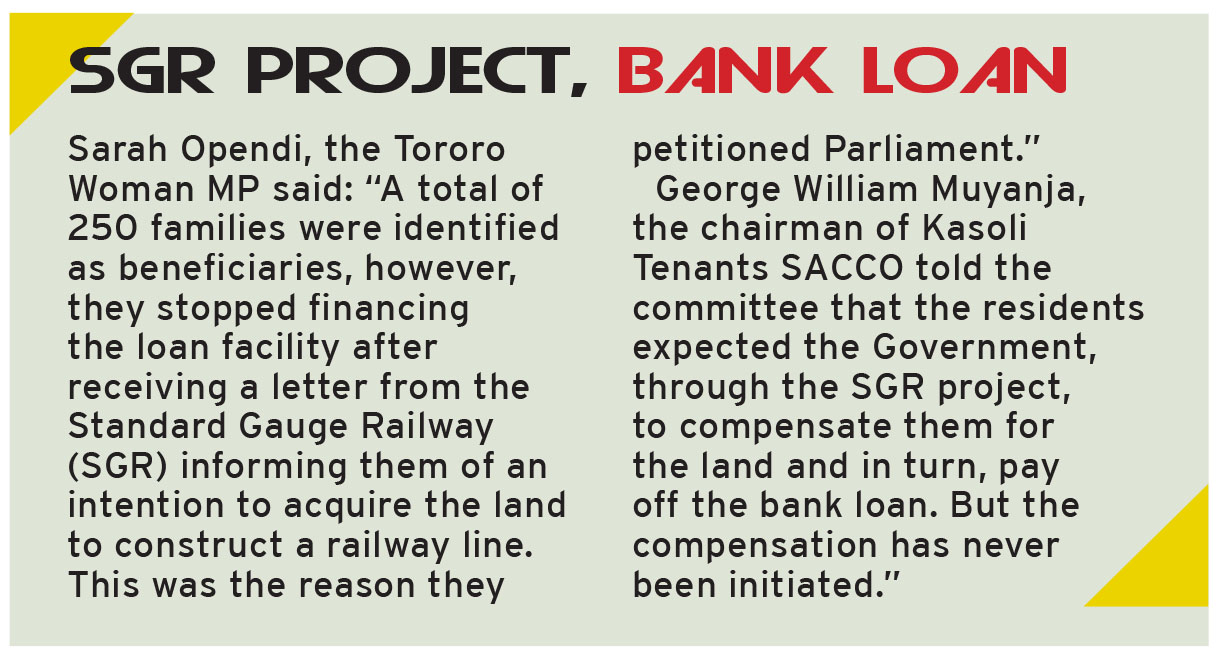 Robert Kasolo (Iki-Iki County), who is the committee vice-chairperson, said: “The committee also discovered fraud in the project and asked dfcu to explain why they disbursed the entire loan yet the project was not even implemented to half capacity. Only 92 houses were built out of the 250 the project envisaged.”

“We believe there is a syndicate to defraud the Government because even the 92 houses were shoddily constructed. We question how government land was offered as collateral without the necessary approval. We want dfcu to explain its move to evict 250 families in Tororo before the expiry of their loan term,” he said.