Home
NEWS
Media
Supplements
Tenders
Notices
State minister for ICT Godfrey Kabyanga (R) congratulates Nabanakulya after she took over his office as one of the activities ahead of International Day of the Girl Child. (Photos by Eddie Ssejjoba)

The information ministry has revealed that all areas of Uganda including the furthest will be able to access the internet in the next two years.

The minister of state for national guidance, Godfery Kabyanga said this would be achieved at the completion of phase five of the National Data Transmission Backbone Infrastructure and e-Government Infrastructure Project (NBI/EGI).

The phase five laying of the NBI is scheduled to kick off this December and according to Kabyanga is to take a period of about two years effectively covering the whole country with internet infrastructure. 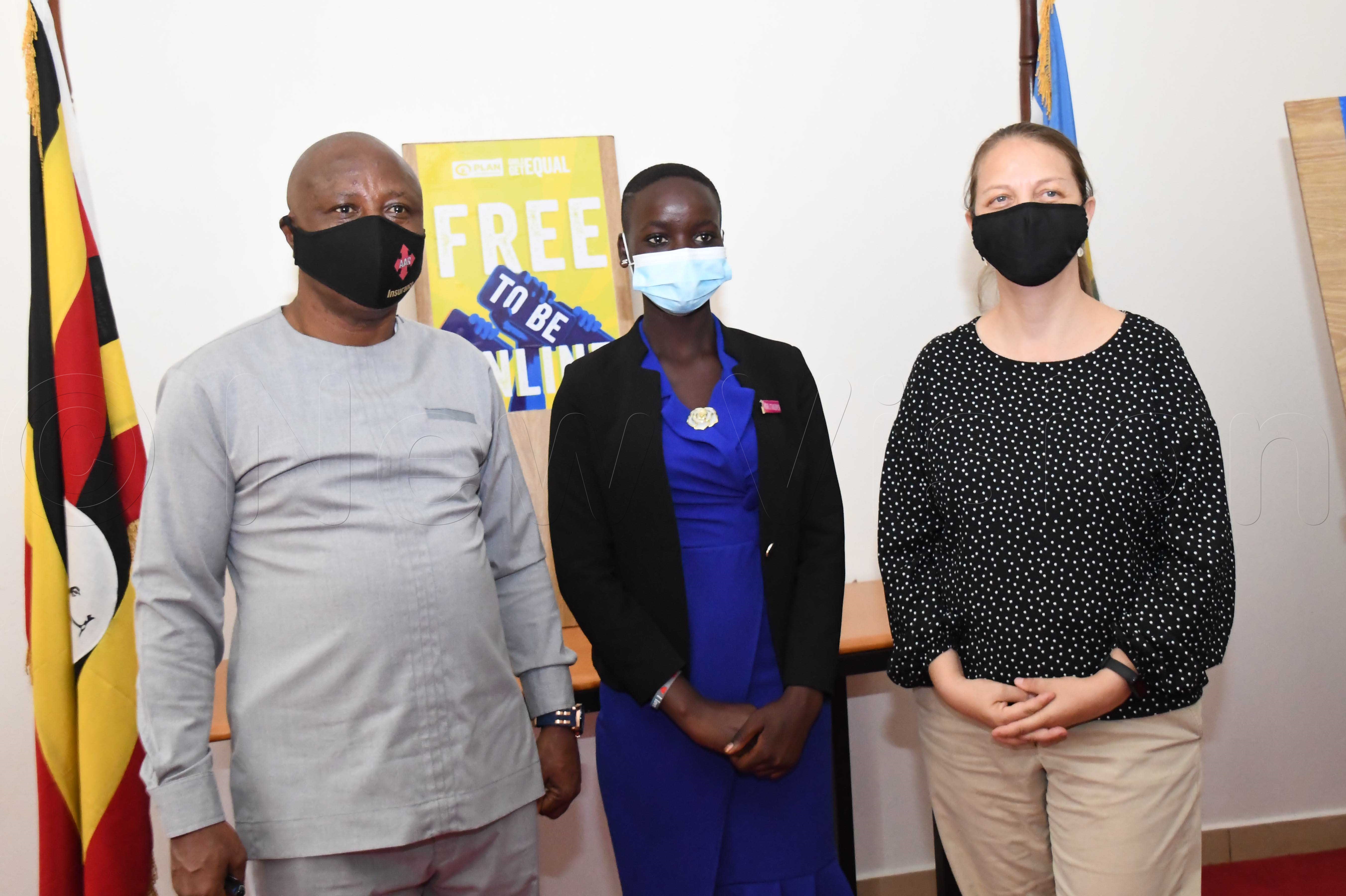 State minister for ICT and national guidance, Godfrey Kabyanga (L) poses for a picture with Angel Nabanakulya, after she took over his office as one of the activities ahead of the International Day of the Girl Child organized by Plan International Uganda. Right is Iveta Ouvry, the organization's country director

Kabyanga made the remarks following an appeal from a girls’ rights advocate, Angel Nabanakulya, who temporarily took over his office at the ICT ministry to restate the importance of a girl child in the run-up to the International Day of Girl Child on Monday.

Nabanakulya among others stressed that poor internet connectivity in several areas of the country limited the girl and boy child from accessing online platforms which have since COVID spread turned into avenues of education.

“Digital life is expensive and exclusive to several children both boys and girls. They say very few have tools like phones, radios, laptops, computers, televisions to use for sustainable communication and also online education,” she said.

Flanked by other two girls Daisy Nangendo as her permanent secretary and Madiinah Namiro, the under-secretary, Nabanakulya tasked government to ensure that digital literacy initiatives cater for all children without discrimination. 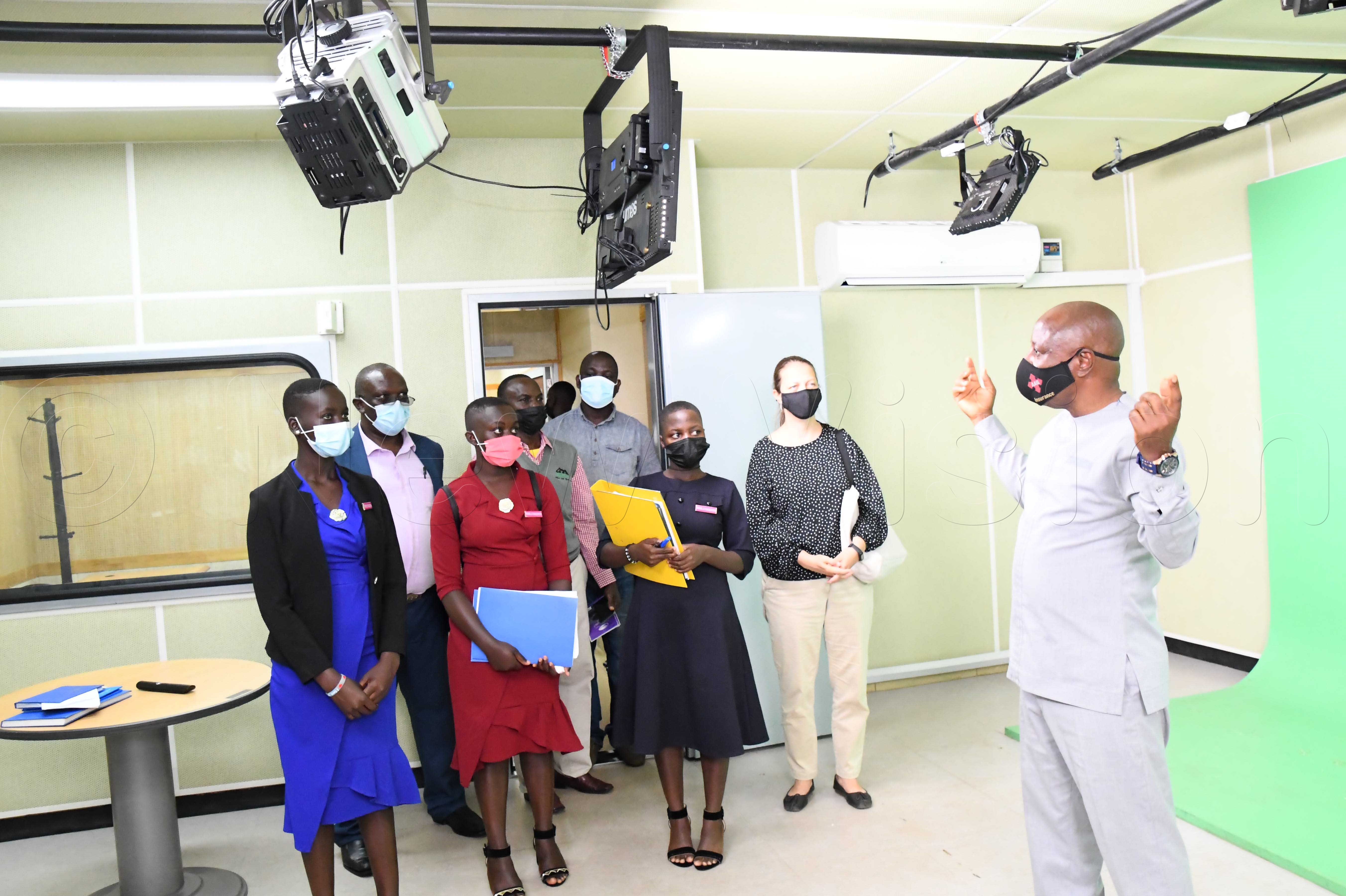 Currently, the internet infrastructure coverage is about 40% concentrating mainly in urban areas and accessible areas.

“But now we are going even inaccessible and with few people areas such as Karamonja because we started with areas where there are many people,” Kabyanga said.
He highlighted that government decided to intervene to ensure that all Ugandans are able to access internet because the telecommunication companies only targeted the popular markets.

To effectively serve Ugandans with the internet, even after laying the broadband network, Kabyanga stressed that it will require government to harmonise business interests with telecommunication networks interested in profits maximization.

“Experts in ICT have informed us that the more the people access the internet, internet costs will go down. And it is in the best interest of the government for every Ugandan to have a smartphone and access internet,” he said.

Government has been implementing NBI/EGI which included extension of the internet and ICT backbone to the West Nile districts of Pakwach, Nebbi, Arua, Yumbe, Koboko, Adjumani, Katakwi and Moroto.

Three border points of Oraba, Vurra border with South Sudan and Mpondwe with the DR Congo have been connected enhancing regional connectivity and addressed the issue of redundancy of the NBI.

The NBI, according to Kabyanga has also been linked to other regional backbone infrastructure in the neighboring countries.

The metropolitan area network has also been installed at Statistics House connecting 27 MDAs and this followed the establishment of the NBI Datacenter with government applications (UMCS and Email).

The National Data Transmission Backbone was established by laying a 1,590-kilometer Optical Fiber Cable across the country.

Kabyanga disclosed that in the bid to reduce the high internet costs, the ministry was engaged in discussions with the finance ministry to reduce taxes on data in order to make internet affordable to all Ugandans.

The country director of Plan International Uganda, Iveta Ouvry highlighted that access to digital skills by young girls and women will help to address the online injustices they suffer such as cyberbullying, harassment and cyberstalking.

This she said through their effective involvement in online initiatives to support their development and opportunities.

Plan International Uganda supported girls to symbolically takeover of leadership positions in government to among others aid perception change about what is possible for the girls and transform power relations in a way that will ensure all girls learn, lead, decide, and thrive in society.