Ethiopia said Thursday it would expel seven senior UN officials for 'meddling' in its affairs, ratcheting up worries over the humanitarian response in the war-torn and famine-threatened Tigray region.

The foreign ministry's announcement came as Africa's second most populous country held elections for dozens of federal parliamentary seats, the final round of voting before Prime Minister Abiy Ahmed forms a new government next week.

The seven UN officials, including the local heads of the UN children's agency UNICEF and its humanitarian coordination office, have been declared 'persona non grata' for 'meddling in the internal affairs of the country,' the ministry said in a statement published on its Facebook page.

'According to the letters addressed to each of the 7 individuals listed below, all of them must leave the territory of Ethiopia within the next 72 hours,' it said.

Ethiopia's northernmost Tigray region has been mired in conflict since November, when Abiy sent troops to topple the regional ruling party, the Tigray People's Liberation Front (TPLF), a move he said came in response to TPLF attacks on army camps.

Fighting ground on for months before Tigrayan rebels retook the regional capital Mekele and government forces largely withdrew from the region.

Since then the TPLF has launched offensives into neighbouring Amhara and Afar regions, while Tigray itself is receiving only about 10 percent of the aid it needs.

In July the UN warned that 400,000 people across Tigray had 'crossed the threshold into famine'.

The situation has only deteriorated since then, as a de-facto blockade prevents most aid from getting in.

Federal officials blame the TPLF for obstructing deliveries, but a US State Department spokesman told AFP last week that access to essential supplies and services was 'being denied by the Ethiopian government' and that there were 'indications of a siege'. 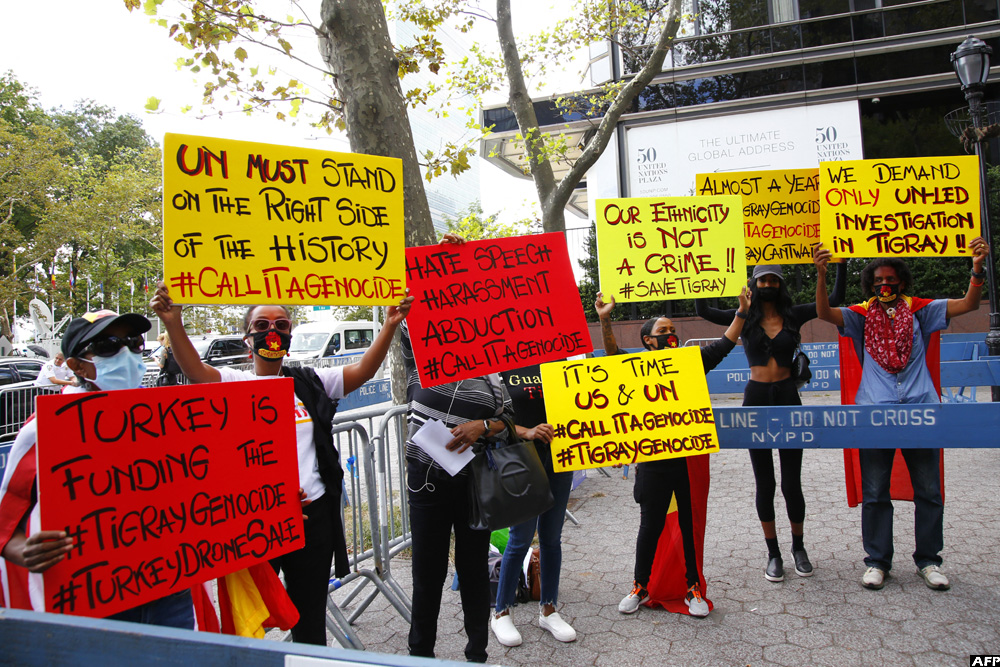 People hold signs to bring attention to conflicts in Tigray region of Ethiopia near the United Nations General Assembly on September 21, 2021 in New York City

Government officials offered no further explanation for the expulsions, although several of the targets have spoken out about dire conditions in Tigray.

Grant Leaity, the UN's acting humanitarian coordinator for Ethiopia who is on the list, warned this month that stocks of relief aid, cash and fuel were 'running very low or are completely depleted' and that food stocks had run out in late August.

Earlier this month, doctors told AFP that Tigray was entering a new phase of fatalities driven by the kind of widespread starvation that turned Ethiopia into a byword for famine in the 1980s.

Internal aid agency documents reviewed by AFP said mothers were feeding leaves to their children to keep them alive, and that malnutrition cases and starvation deaths were on the rise.

UNICEF estimated in July that more than 100,000 children could suffer from life-threatening acute malnutrition in the coming 12 months -- 10 times the annual average.

'Now there will be no help for malnourished children. And it's a blow. We will see a catastrophic increase in dying children in the coming days,' he said.

In the past week, six more children have died of starvation at Ayder Referral alone, he said.

TPLF spokesman Getachew Reda said on Twitter that the expulsions reflected a 'sad but real' situation in which Abiy, winner of the 2019 Nobel Peace Prize, cannot be 'counseled into sanity'.

Last month, Ethiopia also ordered two humanitarian groups active in Tigray -- the Dutch section of Doctors Without Borders and the Norwegian Refugee Council -- to suspend their activities, accusing them of 'disseminating misinformation' online.

Meanwhile, Thursday's parliamentary elections contests were taking place in the Somali, Harari and Southern Nations, Nationalities and Peoples' (SNNP) regions of the country of 110 million people.

Abiy's Prosperity Party already secured a new five-year term with a landslide win in national polls in June, and Thursday's contests will not tip the balance of power in parliament.

Abiy is due to be sworn in again on Monday at a time when his government faces heavy international criticism.

US President Joe Biden this month signed an executive order allowing for sanctions against the warring parties if they fail to commit to a negotiated settlement.