Growing up, Bob Mayonza experienced ﬁrsthand what it means to lack. His mother, who singlehandedly raised him with his three siblings, could not afford to provide for all their basic needs.

The family was often at the mercy of Good Samaritans who offered them food and clothes.

Mayonza did odd jobs to go through school. Today, he has carved himself a niche in philanthropy. He is passionate about improving livelihoods of the less privileged.

“I have dedicated my life to helping those in need. It is the only way I can give back,” the 34-year-old says. 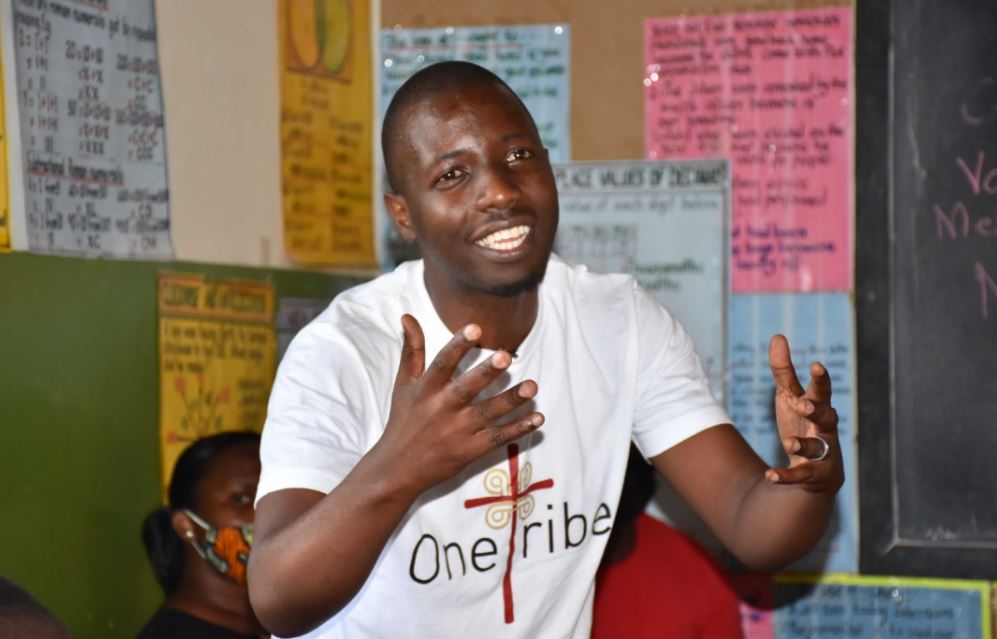 He now heads Pilgrim Centre for Reconciliation Uganda (PCRUG), a non-governmental organisation that engages youth and refugees in peace and reconciliation retreats.

They are trained to become pilgrims and coordinators. They spread the message of hope and healing by renewing individuals, restoring relationships and revitalising communities through reconciliation. Throughout the COVID-19 lockdowns, Mayonza traversed several suburbs and districts while donating relief items to single mothers, orphans, youth, Police and refugee communities.

“I partner with charity groups, wellwishers and philanthropists to make this happen,” he says.

This year, Mayonza has distributed relief supplies including food, soap, cooking oil and pads to over 2,000 people. 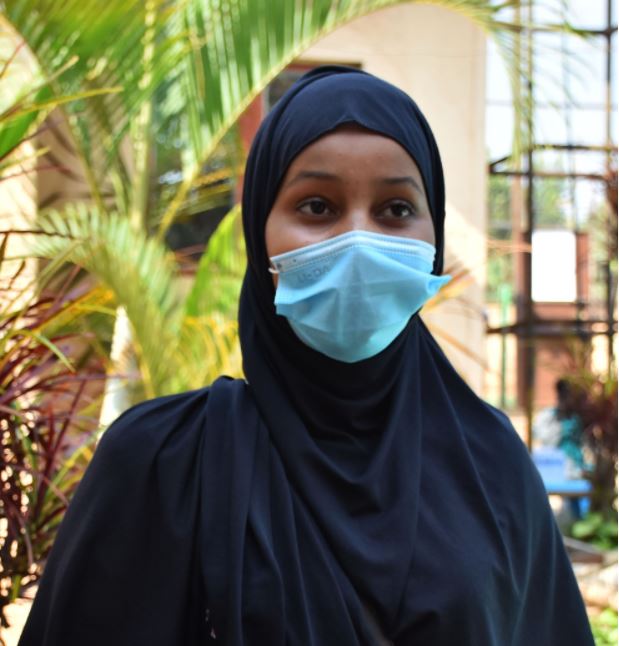 They include South Sudanese, Somali and Congolese refugee communities in Bidibidi refugee settlement and Rhino camp.

“I was raised by a single mother. I know what women go through to provide for their children. I go out of my way to help them. I love to restore hope and happiness in people regardless of colour, status and backgrounds,” he says.

Mayonza says many organisations and Government have been ignoring groups such as the Police and teachers while giving relief yet they are also hard-pressed.

He explains that salary for many ofﬁcers and teachers can barely sustain their families. The lockdown worsened things because children are home and so the demands are overwhelming.

“Minority groups have lost hope and can’t afford basic needs. The onus is upon us to help those in need for a better Uganda,” he appeals. 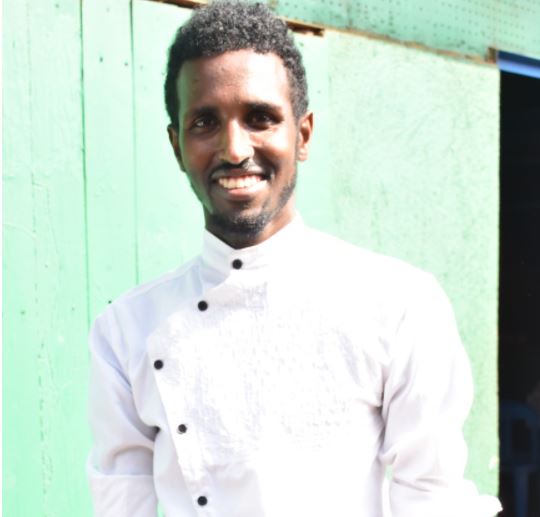 Uganda is home to many refugees. Ismael Ibrahim, the chairperson of the Somali Youth Action Organisation in Kampala, says his team has been moving with Mayonza while helping people during the lockdown.

“We have been moving door-to-door reaching out to our members with emotional and material support. I laud Mayonza for the tremendous work he does for us. We are sometimes sidelined, but he stepped up to give us hope and love,” he says.

Mayonza says refugees come with trauma and fresh wounds that need to be nursed with food, love, shelter and counselling. Many witness gruesome murder of their loved ones, while girls became mothers out of rape.

They need love and patience as equally as they need food. Kaltun Abdidaar, another leader, says during the ﬁrst lockdown, several Somali girls ended up in prostitution in order to survive.

The number of unwanted pregnancies also shot up in this community. Fortunately, Mayonza’s relief items such as food, peace camps and reusable sanitary pads came in handy.

Many girls and young women were helped. Zakaria Teefe Sserwanga, the chairperson of Mengo-Kisenyi in Kampala, also commended Mayonza for impacting on urban refugees who are now engaged in small businesses in different suburbs of Kampala.

“This has reduced redundancy and the crime rate in our villages and among the refugee communities,” he says.

For example, in Bidibidi refugee settlement, Mayonza held retreats during the lockdown. He met 60 youth aged between 18-25 who had formed a group and were waiting to go back to South Sudan for revenge.

Their leader had crossed into Uganda, but his dad did not make it. He was betrayed and killed by his friend at the border.

“This boy’s mind was focused on killing the man who killed his father. He formed a group to revenge,” Mayonza says.

However, in the reconciliation retreat, the boy revealed his plans and changed his mind after the training.

Luke Rwakako, a Police ofﬁcer in Kajjansi, Wakiso district, and Charles Ssebwana, the head of operations at Lubowa Police Station, testify that the peace camps and dialogues have helped improve the relationship between Police and bodaboda riders in their areas.

“He is growing a movement of peace and reconciliation advocates. His team identiﬁes people from the different communities and they bring them on board. They are trained to reconcile and facilitate peace dialogues, healing and reconciliation retreats,” Rwakako says.

Mayonza plans to move across Uganda and beyond.

“Now that Afghans are here, we are going to them. They need the reconciliation message,” he says.

Mayonza is planning a walk of reconciliation, where his movement will hold assemblies and showcase the pros of peace and reconciliation.

Mayonza also targets to work with organs like the Uganda Law Society to set up peace and reconciliation clubs in schools and tertiary institutions.

“Young people should understand how peace, reconciliation and justice are married,” he says.

Mayonza plans to organise lectures and campaigns for government and international community to understand that silencing guns does not stop war. People will still hurt if they are not counselled.

Meeting the menstrual hygiene needs of girls comes with hiccups, more so during the lockdown.

Many parents are hard-pressed to spend sh3,000 on sanitary pads at the expense of putting food on the table.

Girls are pushed to think out of the box to get through the monthly cycles.

For this, through the Hope programme, Mayonza distributed menstrual cups to over 300 vulnerable girls in Katulaga and Buwoya villages in Wakiso district.

They last for over 10 years. The girls were also sensitised on knowing their bodies and how to handle their menstrual health.

Fathers too were involved in the discussions and training on menstrual cups.

Peter Mutuluuza, a peasant and father of four girls, says he was struggling to buy sanitary pads for his secondary school-going children. Some months they would use pieces of cloth.

“The cups have lifted that burden off my strained pockets,” he says.

Anasi Kibira, another father, says sh3,000 is too much to buy pads. He would painfully negotiate with his wife to forego food and buy the sanitary pads.

Mayonza asked young people to stop struggling for power because God has not called all people to positions of power, but to empower our nation and build it with peace, knowledge, brotherhood and as one tribe regardless of clan, religion and colour.

“Empower others no matter the ofﬁce you hold. Relate with your neighbours, restore and renew relationships with the little you have,” he advises.

He also holds a master’s in operations management from Amity University in India and has several certiﬁcates in conﬂict management and peace building.

He describes himself as a human rights and peace advocate. Mayonza is married.