PERFORMANCE
Microfinance Support Centre Ltd (MSCL) provides relatively affordable credit and business development services to microfinance institutions, micro, small, and mediumsized enterprise (MSMEs), cooperatives, savings and credit co-operative organisations (SACCOs) and village savings and loans associations, on behalf of the Government, with focus on the economically active poor both
in the urban and rural areas. Following a study that was conducted on the urban ghettos, MSCL has increasingly been lending to enterprises in the urban ghettos targeting the urban poor. Secondly, in order to reach the urban poor, MSCL established satellite contacts in downtown areas where on given days, staff are deployed to respond to the needs and facilitate credit services to the urban poor. These innovations have been adopted within the new strategic plan 2020-2025. 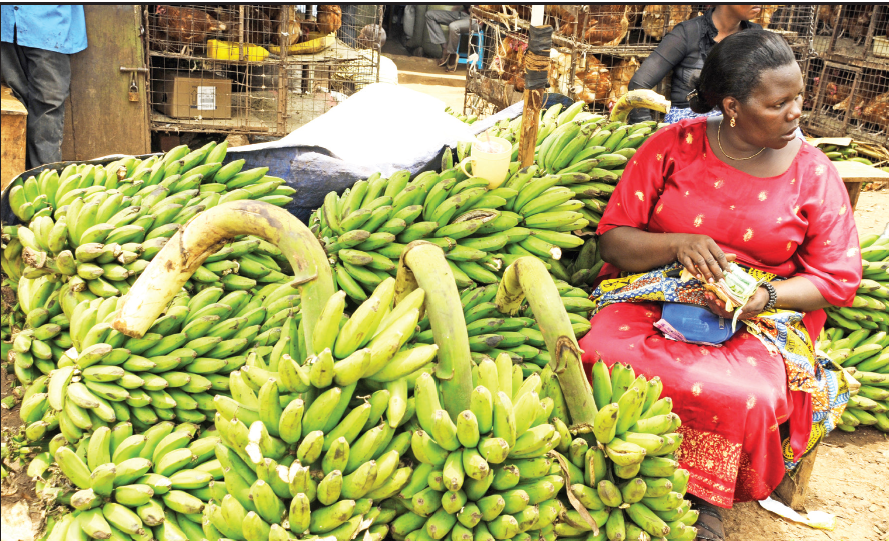 Unfortunately, the outbreak of COVID-19 negatively impacted economic activity with real GDP growth declining to 2.9% in FY2019/20. This was due to the lockdown restrictive measures.

The average real GDP growth between FY2016/17 and FY2019/20 was 4.9%, which is below the growth target of 7% as stipulated in the manifesto. This was due to a number of shocks, such as droughts and locusts and more recently COVID-19, which all affected demand and supply resulting in lower economic growth during the period.

PERFORMANCE PRODUCTION
Government undertook the following measures and interventions to upscale production:
- Distributed improved seeds and breeding materials under the Operation Wealth Creation (OWC) programme and the National Agricultural Advisory Services (NAADs) to the district local governments (DLGs). These include coffee, maize, beans and cassava cuttings. This resulted in increased volumes in production and exports as follows:
I) Increased coffee production from 5.7 million 60kg bags to seven million bags between 2017 and 2019.
II) Fish catches grew from 391,000 metric tonnes to 561,000 metric tonnes between 2017 and 2019 while fish export volume have increased by 27%.
III) Increased oil palm production in Kalangala in 2018 by 55% to 37,800 tonnes valued at sh21.4b compared to the 2016 production of 24,300 tonnes valued at sh13.4b.
IV) Increased milk production in 2018 by 19% from 2.1 billion litres in 2015 to 2.5 billion litres in 2018.
V) A total of 13,800 acres of sugarcane have also been established at the Atiak Sugar Factory in northern Uganda and more is planned when the Amuru project starts.
- Established and rehabilitated water for production facilities such as valley dams, valley tanks, irrigation schemes and smallscale irrigation demonstrations and water harvesting sites to increase availability of water for agricultural production at farm level. The irrigation schemes that were completed and commissioned include:
I) 1,178 hectares at Doho II in Butaleja district, 480 hectares at Mubuku II in Kasese district, 1,000 hectares at Wadelai in Nebbi district, 500 hectares at Torchi in Oyam district and 880 hectares at Ngenge in Kween district.
II) Completed construction of 50 small scale irrigation demonstrations and water harvesting sites in selected districts under nine zonal agriculture research and development institutes; small scale solar-powered Irrigation Schemes in the districts.
- Recruited public agricultural extension staff in LGs. The ratio has since been improved from 1:5,000 to about 1:1,800 and reached 3,032, which is 60% of the target (5,000 recruited extension workers). 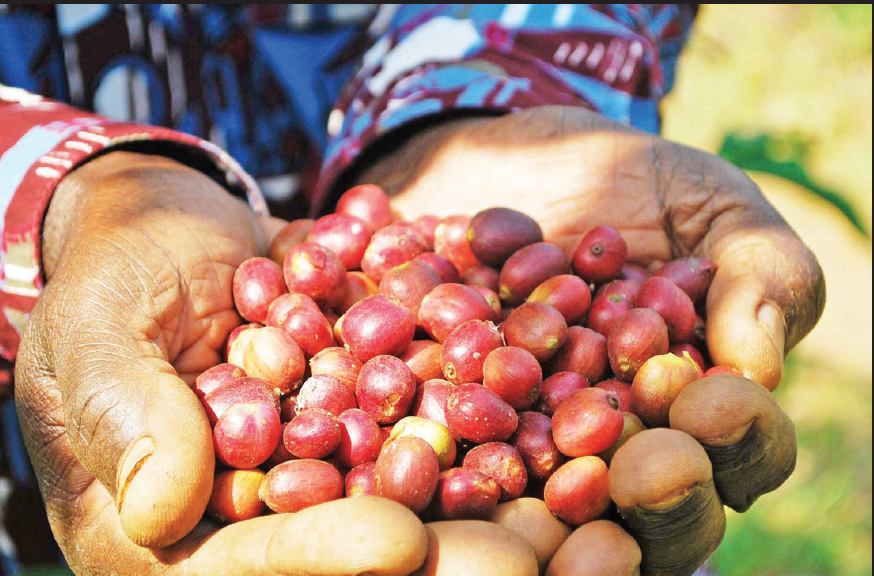 PRODUCTIVITY
In regard to productivity, the Government undertook the following:
-Finalised and rolled out an e-voucher system to enable farmers access free farm inputs supplied by OWC through a digital coupon. The distribution of seedlings and fertilisers are now supplied to farmers through mobile delivery services that are directly linked to their specific names and national registration card numbers.
- Cabinet approved the Fertiliser Policy and Strategy for Uganda in 2016. To this end, Sukulu fertiliser factory was constructed through a public private partnership and Launched in 2018. It is expected to produce 300,000 tonnes of fertilisers, 300,000 tonnes of steel products, 200,000 tonnes of sulphuric acid, 300,000 tonnes of gypsum, 100,000 tonnes of rare earth elements (REE) minerals and 40,000 tonnes of Niobium annually. This is aimed at promoting the use of manure, organic and inorganic fertilisers to improve agricultural output.
- Ministry of Defence and Veteran Affairs engaged in production activities under National Enterprise Corporation (NEC) with the following subsidiaries: NEC Katonga Farm, NEC tractors, Luweero Industries Ltd, NEC Construction, Works and Engineering Ltd, NEC Tractor Hire scheme and NEC Uzima.

- Passed Uganda Development Corporation (UDC) Act in 2016 and strengthened UDC to spearhead the establishment of strategic industries to enhance value addition for the various value chains for sustained growth. Progress has been made on the  following:
I) UDC partnered with Kigezi Highland Tea Ltd and completed construction of two tea factories In the districts of Kabale and Kisoro. In this regard, UDC has also extended financial support to tea factories in western Uganda through a 10-year equipment lease financing for Kigezi Highland Tea Co. Ltd, Kayonza Growers Tea Factory and Mabale Growers Tea Factory Ltd
II) Established a fruit processing in Teso (Teju-Soroti fruit factory) and Luwero
III) Commissioned Yumbe mango fruit factory in January this year
IV) Dairy industry in Ankole
V) Vegetable oil industry in Kalangala

- Through UDC, the Government acquired 32% stake in Atiak Sugar Factory, which has a nucleus farm and an out growers’ scheme that is potentially viable in job creation and agroindustrialisation.
This factory that is run through a public private partnership arrangement between the Government and Horyal Investment Holding Company Ltd was launched in October last year.
- UDB launched its five-year strategic plan for 2018-2022 with key sector intervention strategies in agriculture, manufacturing, tourism, infrastructure, human resource capital development; mineral, oil and gas sectors. The Government has continued to capitalise Uganda Development Bank (UDB) Ltd to provide longterm financing for manufacturing and agriculture. To date, the Government has capitalised UDB to the tune of about sh1.1 Trillion over the 2016-2021 period (see UDB Annual Reports 2016-2019 and Budget Speeches).
- Launched the Public Investment Management in Agro- Industry (PIMA) strategy that prioritises nine commodity value chains for investment. These products are coffee, cotton, tea, cassava, maize, oil palm, fisheries, dairy and beef. They are part of the 14 commodities directed by the President. This is geared towards promoting the agroindustrialisation agenda in Uganda.
- Launched the Agriculture Insurance Scheme and low-cost agriculture machinery. Furthermore, the Agricultural Credit Facility and the Micro Finance Support Centre have been facilitated to offer low-cost credit.

PERFORMANCE
1. The Government has and continues to invest in UDB, the Agriculture Credit Facility to increase and guarantee availability to long term finance for development projects. The Government, therefore, in the medium term will continue to capitalise UDB and mobilisation of lines of credit to:
1. UDB
2. Post Bank
3. Pride Micro Finance
4. MSC provides affordable development microfinance services through effective management and delivery of government and partner development funds with focus on the economically active poor.

MANIFESTO PLEDGE
Promote insurance penetration and awareness in the country.

PERFORMANCE
1. Developed 17 sets of Insurance Act regulations. Seven sets have been gazetted. The objective of the Act and regulations are to increase insurance penetration by ensuring effective administration,
supervision, regulation and control of the business of insurance in Uganda.
2. Developed National Insurance Policy (NIP) for Uganda has been drafted; with the main purpose of enabling all Ugandans to access affordable insurance for sustainable incomes and livelihoods.
3. Established the Uganda Agriculture Insurance Scheme (UAIS). The objective is to hedge farmers against agricultural risks and tracking credit to the agriculture sector.
4. Developed the National Health Insurance Scheme (NHIS) Bill was approved by Cabinet and subsequently tabled before Parliament with the aim to develop health insurance as a mechanism for financing health care in Uganda.
5. In the process of repealing the Mandatory Vehicle Insurance Act 1989. The objective of the overhaul is insurance against third party risks compulsory for users of vehicles; protect road
users and ensure that persons injured in motor accidents receive economic compensation.
6. Motor Third Party is now payable using a digital platform
7. The Insurance Regulatory Authority developed a marketing and sensitisation plan. The objective of the plan is to create awareness in the public. The sensitisation plan is delivered through talk shows and drives, among others.

PERFORMANCE
- The Ministry of Finance, Planning and Economic Development and the Ministry of Lands, Housing and Urban Development, worked with the World Bank Group
(WBG) to develop the housing sector. A feasibility study was undertaken and an implementation framework of the recommendations for the provision of long-term funding through the formation of
a liquidity facility was one of the fi nancial initiatives that was examined. Based on the WBG’s global experience in the housing fi nance sector, particularly in helping set up mortgage refi nance facilities in different countries of the region and globally, in 2016 the housing ministry requested that the WBG conduct a feasibility study and prepare a preliminary business plan for setting up a mortgage refinance facility in Uganda, i.e. the Uganda Mortgage Refinance Company.

PERFORMANCE
In FY2019/20, the Government capitalised the Housing Finance Bank (U) Ltd with sh30b for mortgage improvement.