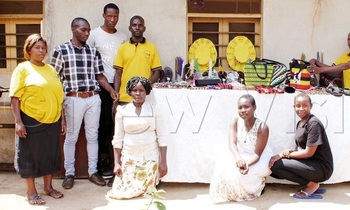 Since the outbreak of the COVID-19 pandemic, the Government has been emphasising import substitution as one way of strengthening the economy, through foreign exchange inflows.

A number of factories have been opened during this time to boost production for export and already, Uganda is selling more, especially to her neighbours.

Experts have used this opportunity to agitate for youth skilling and employment, which they say if ignored could see a number of Ugandans slide back into abject poverty in the immediate to short-term.

The youth constitute about 75% of the population.

"The best way forward would be for the youth to create their own jobs, but the problem is that they don't have the skills and capital to do it," Japheth C. Kawanguzi, the Innovation Village team leader, said.

This is aimed at skilling the youth in wood, media, film, entertainment, art production and entrepreneurship.

Motive is a community of more than 300 artisans in metal, wood, fashion, art, film and media interested in gaining skills for quality production and entrepreneurship.

Kawanguzi said since the biggest percentage of youth has no advanced academic qualifications, the centre would teach them new skills and help them turn into formidable entrepreneurs.

He said these (youth) would form a big sustainable base for production, in support of the Buy Uganda Build Uganda (Bubu) initiative and the ongoing import substitution efforts.

"We have a couple of large organisations that buy in bulk, and we believe they could start buying locally and support local artisans," Kawanguzi said.

Often, the quality of locally produced goods has come under scrutiny,

both locally and abroad, a matter Kawanguzi said is being resolved by teaching the youth to appreciate the importance of quality.

He said the youth are also being teamed up with more experienced artisans to learn and produce goods to the desired quality, which can be sold on the global market.

Kawanguzi said hitherto, the creative industry has mainly been driven by passion, which has never been translated into business.

"This is, therefore, meant to teach the creatives how to turn their passion into business, because we need to build a number of startups that can in the future turn around our fortunes as a country," he said.

Cathy Opondo, an entrepreneur, said there is need to link local corporations to local producers, to promote Bubu and reduce forex outflows as well.

"We need to learn to promote our own products instead of importing all the time. We can teach our young people to innovate and create high quality products and substitute them with imported goods. This way, we shall create more jobs," she said.

Eve Zalwango, the manager of Fundi Women, said one of the biggest challenges the young startups are facing is lack of access to capital, reliable human resources and a negative mindset towards locally produced goods.

Kawanguzi said through the Innovation Village, they are also focusing on unlocking and enabling the potential of young Ugandan entrepreneurs using technology, amidst challenges such as COVID-19.

He said they want to unlock the market for the youth, create a proper environment that has good policies, business development support and

Its Decoding Venture Investments in Africa 2019 Report found that 427 startups raised funding throughout the year, and a mere 6% of these accounted for 83% of the total investments.

"The Ugandan entrepreneurship and ecosystem comprises some of the youngest population on the continent and in the world, with an average age of 17 years, and 77% of the population under 25 years of age. Uganda, therefore, has the potential to become one of the biggest entrepreneurial prospects in Africa," Kawanguzi said.