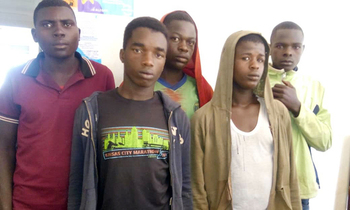 The police in Kabaale were still holding five Rwandan nationals suspected to be part of smugglers who were repulsed by Rwandan security personnel who shot at them as they tried to sneak back into their country with ‘illegal' goods.

One of the suspected smugglers, according to the police, who sustained bullet injuries managed to escape with the rest of the group but died as he was being rushed to the Ugandan health facility.

The Kigezi region police spokesman, Elly Maate, said that on Friday, November 20, 2020 at about 9:00pm a group of Rwandan smugglers carrying waragi (local gin) jerry cans tried to enter back their country through the border point of Nyakena village in Kivuye Sub County, Bulera district.

He said the scene where the group was intercepted is 100 meters inside Rwanda.

According to Maate, three smugglers were seriously injured but they managed to run back with the rest and entered Uganda.

But after half a kilometer, according to Maate, at Muguri village, one victim died due to heavy bleeding from the bullet wounds as his colleagues tried to carry him to a nearby health facility.

They were later rushed to Rubaya Health Centre IV for further management.

On Saturday, according to Maate, the injured victims were transferred to Kabale Referral Hospital. The body of the deceased was taken to Kabale hospital mortuary for postmortem.

The rest were rounded up by the police in Uganda and locked up to help with further investigations.

"The police are still making further inquiries, after which the body will be handed over to the Rwandan authorities," Maate explained and described the shooting as murder.