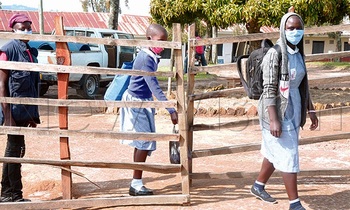 BUSHENYI - Molly Kirungi, a Senior Four candidate at Ruyonza School, woke up with excitement to join his fellow students and resume studies after having spent about seven months at home.

She bathed and prepared herself, but on picking her skirt from the suitcase, she found the skirt could no longer fit her.

"I got so disappointed because I was eager to go to school and resume studies," she says.

She is among the many students and children who have not been able to report on the first day due to several challenges emanating from the effects of COVID-19 pandemic breakout.

Katushabe Kanongori of Rwakanyonyi in Nyakabirizi division was also unable to send her Primary Seven daughters back to Nyamiko Primary School after failing to raise the requirements.

In some schools in Bushenyi/Ishaka municipality, there was generally a low turnout. At Rwenjeru Primary School, out of 16 candidates, only eight reported.

The headteacher, Gerald Ngabirano, however, described the turnout as good. "We are beginning afresh and it is likely to take us some days to stabilise," Ngabirano said.

At Nyamiko Primary School, out of 15 pupils, six made it on the first day.

Justice Benadin was found seated in a classroom revising on her own as the Primary Seven teacher was teaching candidates.

There has also been changing of schools whereby some parents whose children have been in urban schools like Kampala have now chosen to take them to schools neighbouring their upcountry homes.