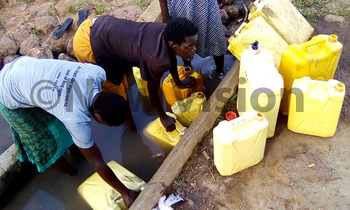 When Dora Ahereza, 29, completed her studies, she hoped to get a good job and look after her family. Indeed, her dream came to pass, and got a job at the same school she did internship.

"I was lucky. The director contacted me and other two colleagues to go back and teach as full staff," she narrates.

In 2017, she got married and shifted from the school quarters to stay with her husband, about 3kms from her workplace.

Ahereza's life toughened after giving birth. She had to balance between caring for her baby and work.

"I used to breastfeed my baby first and prepare other things before going for work. At times I would arrive at work 30minutes or an hour late depending on the situations at home. But I also had to return home to breastfeed, which didn't go down well with my boss," she recalls.

Ahereza was later dismissed on grounds of failing to deliver to their expectation.

"The headteacher summoned me to his office twice, asked me to choose between my baby and the job. I just opted to quit because my child needed care," she says.

Now a mother of two, Ahereza decided to use her little savings to set up a small grocery business at the edge of her compound.

"Though I can easily look after my children, it also affects my shop because I have to prepare for my children and take them to school and pick them daily on top of other house chores. I realised I need to hire a maid to help me which is costly," she says.

The burden of domestic work

They argue that the majority of the women especially those in rural areas spend more time doing unpaid care work like looking after children, animals, and other home tasks compared to the hours they spend in productive work.

This, they say limits women from contributing to economic development at various levels.

The Program Coordinator of African Women Service Trust (AWST), Betty Nesihwe, says the problem stems from the setting and perception of "our society" especially in African.

"The social setting does not appreciate the importance of women in development at the family and community level. Women are still seen as just housewives. That is why many families remain poor because they depend on a single source of income," she notes.

If men get to appreciate the role of women towards general economic growth; she says this can make it easy to advocate for better social services.

"Many women with qualifications fail to work because of family engagements like looking after children and other tasks," she adds.

"Due to the lack of reproductive health services, women in rural areas cannot control pregnancy. Some men use childbearing; as a tool to keep their spouses home looking after children and doing domestic work, then engaging in productive workforce," she adds.

The 2018 Oxfam report on gender roles and the care economy in Ugandan households indicates that most domestic work is largely done by women, without earning a single shilling.

The Director of Programs at ActionAid International Uganda (AAIU), Harriet Gimbo, explains that all poor public services mainly affect women, being the key managers in homes.

"Women look after children, men, the sick, and do all the unpaid work at home. This takes most of their time, which makes it hard for them to engage in productive work. But if the government improves the quality of public services like in the health sector, and improving access to other utilities like water and energy; women can be relieved of the heavy burden," she adds.

Gimbo stresses that even those who work, majority do low-paying jobs where they are paid less than a dollar a day. We need to promote women's labour, decent work, and gender-responsive services," she notes.

She says the government needs to expeditiously introduce a minimum wage bill to avoid the exploitation of women and other vulnerable groups.

"They need to appreciate this work to easily reduce the burden of their women. What is wrong with sharing some roles like bathing children; washing utensils or cleaning the house as your wife is cooking?" she asks.

She notes that the unequal distribution of unpaid care work is one of the reasons why most families are locked in poverty.

Aritua says studies show that on average, women spend about 32 hours weekly on unpaid care work and about 22 hours on unpaid production to feed their families through subsistence agriculture.

She illustrates that apart from affecting the families' growth; unpaid care work expansively also affects the economic development of the country.

She says the government needs to put in place deliberate measures to reduce the burden of unpaid care work to help women to effectively engage in a productive workforce.

"That is why some companies prefer more men than women. It is one of the reasons we still have variations in employment. That is why we have been demanding to have things like childcare facilities at all workplaces," she adds.

With better and affordable utility services like water and energy; Aritua is convinced that it can easily reduce the time spent by women going to collect water and firewood.

According to the Uganda Household Survey 2016/17, 80% of households had access to improved sources of drinking water with 97% of the main drinking water sources within 3.0kms.

The survey shows that the burden of fetching water mostly rests on female adults and the girl child.

It also shows that people traveled about 5kms to access health care when they fell sick and only 05% were covered under health insurance.

The study shows that firewood and charcoal combined constitute the main source of fuel for cooking for 94 percent of the households.

The Executive Director, Uganda Women's Network (UWONET), Ritah Aciro, says though the UCDW is a social good that enables the functioning of families, societies and the nation; there is still a need for substantial investments in care facilities towards reducing and redistributing the unequal care and domestic responsibilities.

"The unpaid care work has no direct economic value," she notes.

She stresses that this can be addressed if better social services are put in place.

The Acting Women Rights Advisor Oxfam, Charity Namara attributes the problem to the illicit financial flows by multinational corporations and the rich, which reduce domestic resources and tax revenue needed to fund poverty-reducing programs and infrastructure which could facilitate the reduction of unequal care and domestic responsibilities, which extremely fall on women and girls.

She says multinational corporations' encroachment on wetlands, forests, gas emissions among others, has contributed to climate change, whose adverse effects mostly affect women who rely on forests to collect firewood and sometimes natural wells for water.

"When wells dry up and forests depleted, women spend more time on unpaid care roles such as water and fuel collection. This increases their unpaid care duties and poverty, thus keeping them away from productive work," Namara notes.

The 2018 Statistical Abstract by Uganda Bureau of Statistics (UBOS) shows that a proportion of females in paid employment stands at 33% and 51% in self-employment, while Uganda's average household monthly expenditure decreased from sh328, 200 in 2012/13 to sh325, 800 in 2016/17, representing a real decrease of about 1%.

The head Budget Monitoring and Accountability Unit in the Ministry of Finance and Planning, Margaret Kakande says gender inequality hinders poverty reduction and endangers the prospects of economic and human development.

"That is why the government needs to put in place better services to allow women to effectively engage productive work to contribute to the development of their families and the country at large.

The Dokolo woman MP and women rights activist, Cecilia Ogwal says the government needs to support women to improve their agriculture methods and improve on the market systems.

"Majority of women depend on agriculture. They need to be supported to engage in commercial agriculture to get food for their families and also trade to earn a living," she says.

Joseph Olwenyi, the coordinator finance for development Oxfam, says as Uganda prepares to roll out the National Development Plan III (NDPIII), there is a need to expand social security schemes to benefit those in the informal sector, with the majority being women and provide policies that provide for child care in all workplaces.

Jane Biruha-Akuha, the deputy headteacher at Rubaga Primary: "There is a need to improve health services the like re-introducing nursing aides in health facilities.

Many women spend time looking after the sick in hospitals and even lose their jobs yet they would be assisted by the nursing aides to void being interrupted. They should also provide clean tap water in every home to save women from walking long distances going to fetch water".

Agnes Nafula, a teacher at St. Gyavira Primary Lweza: "Government needs to ensure that all workplaces have childcare centers for mothers to easily access to their children while at work. We also need safe places where women can change during their menstruation periods. This can keep them at work without being inconvenienced".

Anitah Mutesi, a student at Ndeje University: "There is a need to improve on the quality and access to basic social services like health services, water, and energy. These are some of the things which greatly hinder women from being productive".